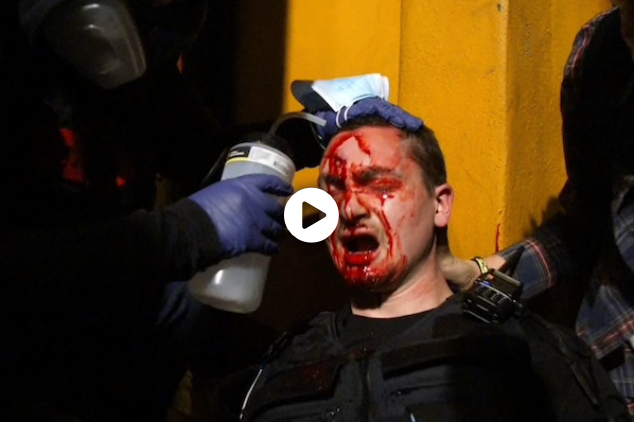 SEATTLE - Protests in several major cities across the country turned violent this weekend, as weeks of civil unrest and clashes between activists and authorities boiled over, sending thousands of people teeming into public squares demanding racial justice.

SEATTLE - Protests in several major cities across the country turned violent this weekend, as weeks of civil unrest and clashes between activists and authorities boiled over, sending thousands of people teeming into public squares demanding racial justice.

From Los Angeles, to Richmond, to Omaha, police and protesters clashed in another tumultuous night that saw scores arrested after demonstrators took the streets and police in some cities dispersed crowds with tear gas and pepper spray.

In Austin, a man was shot and killed in the midst of a downtown rally. In Richmond, a truck was set ablaze outside police headquarters. Outside of Denver, a Jeep sped through a phalanx of people marching down an Interstate, when a shot was fired injuring a protestor, police said.

The focal point of the protests continued to be in the Pacific Northwest, where a week of clashes between activists and federal agents in Portland, Ore. pumped new energy into a movement that began in the wake of George Floyd's death in police custody in Minneapolis over Memorial Day weekend.

In Portland, the authorities declared a riot after protesters breached a fence surrounding the city's federal courthouse building. The "violent conduct of people downtown" created a "grave rise of public alarm," the Portland police wrote on Twitter.

Early Sunday morning, federal agents and local police demanded that protesters leave the area and used teargas to try to disperse them. But the activists stood their ground, blocking intersections. Several people were arrested.

A Marriott hotel in downtown Portland was shut down Sunday morning, and guests were asked to leave after hundreds of protesters demonstrated outside Saturday night because it was believed that federal agents were staying there. The crowd waved signs with messages such as "No more brutality!" as they stood on the riverside parkway outside the hotel and chanted: "Kick them out, Marriott!" A manager at the hotel said after the demonstration that the building had sustained some "minor damage," including graffiti on exterior walls.

In Seattle, police declared a riot on Saturday afternoon and used pepper spray and flash grenades in an attempt to disperse a crowd of roughly 2,000 people in the Capitol Hill neighborhood marching in the city's largest Black Lives Matter protest in more than a month.

Nightly protests since Floyd's killing had dwindled in recent weeks in Seattle. But they were reinvigorated in the wake of federal action in the Portland protests and after Washington Gov. Jay Inslee, a Democrat, tweeted that President Donald Trump had sent federal law enforcement agents to the city.

"For a month, the President threatened to send federal forces to 'clean up' Seattle. The President has made good on his threats in Portland, and continues to exacerbate the situation on the ground, endanger communities, and jeopardize the work of local officials," Seattle Mayor Jenny Durkan, a Democrat, said Wednesday in a statement. "The President unilaterally deploying paramilitary-type forces into American cities should concern all Americans. His blatant disregard for the constitution - and for the safety and well-being of our residents - is textbook despotism."

Portland's Democratic Mayor Ted Wheeler, who was teargassed last week as he joined protesters, has described the agents an "occupying force."

But on Sunday, Mark Meadows, the White House chief of staff, defended the presence of federal agents there, saying they're protecting a courthouse targeted by protesters.

"It has not only been vandalized, but they're trying to burn it down," he said on ABC's "This Week." "We can't have this in American cities. You've got people there and fencing there, but they're throwing Molotov cocktails, and doing all kinds of rioting."

Police in Richmond tweeted a photo of rocks and batteries they said had been thrown at them, triggering them to declare the protest outside of police headquarters an unlawful assembly.

In Aurora, Colo., just outside of Denver, protesters were also marching in response to the death last summer of Elijah McClain, the 23-year-old who died after being put in a chokehold by police. On Saturday, police said in a tweet that "while the majority of protesters were peaceful, a group decided to hijack the message & cause major damage to the courthouse and courtyard."

The protesters marched down Interstate 225, cutting off traffic. But a Jeep sped through the crowd, sending protesters running for safety.

"A protestor decided to fire off a weapon, striking at least 1 other protestor" police said on Twitter. That person was in stable condition at the hospital.

On Austin's Congress Avenue, normally a site for music venues and bars, police were monitoring a crowd of protesters Saturday night when Senior Officer Katrina Ratcliff said shots were fired, killing a man. The suspect was detained, she said, "and is cooperating with officers."

"Someone dying while protesting is horrible," Mayor Steve Adler of Austin said in a statement. "Our city is shaken and, like so many in our community, I'm heartbroken and stunned."

Protesters in Omaha marched to bring attention to the killing of James Scurlock, a black man killed by a white bar owner. Police came out in force Saturday night and detained more than 75 people who were marching downtown, obstructing traffic, according to local news reports. While there was no major damage was done, Police Capt. Mark Matuza told the Omaha World-Herald that the gathering "leaned toward the potential of getting violent."

In Los Angeles, police fired projectiles at activists protesting near a federal courthouse.

Seattle's riot declaration came after protesters set fire to a construction site for a juvenile detention facility and as the police department reported that one person had breached the fencing surrounding the East Precinct, the site of nightly clashes in June that led to a nearly month-long protest occupation, and officers saw smoke in the lobby.

Police said protesters were throwing rocks, bottles and fireworks at the officers. As of 7:30 p.m. local time, the department had reported 25 arrests and three police injuries, including an officer hospitalized with a leg injury caused by an explosive. The department posted a photo of unused fireworks found at the scene to its Twitter feed.

Protesters erected barricades and fended off police efforts to disperse them with homemade shields, umbrellas and leaf blowers, tactics borrowed from Portland, Ore., protests, where activists have clashed nightly with police for nearly two months.

Protesters gathered in the early afternoon on Saturday, holding signs declaring "We Stand With Portland Feds Out!" and "The Feds Don't Scare Us." Medics handed out earplugs to prevent hearing damage from flash bangs and vials of saline solution to dilute pepper spray and tear gas.

Before the march, organizer Jaiden Grayson stood on a brick wall with a megaphone and instructed the crowd on tactics like "de-arresting," where groups of protesters block efforts by law enforcement to arrest individuals.

Christine Edgar said that when the yellow-clad Wall of Moms emerged at Portland's Black Lives Matter protests last week she decided that Seattle mothers needed to adopt the tactic as well. With three days' notice, she said, a Seattle "Wall of Moms" formed to march in the streets to protest the federal presence.

"I wanted to make sure that black and brown voices were represented among the moms," Edgar, who said her son was at the protest, told The Washington Post before addressing the crowd with a megaphone. "When people hear 'mom,' they always think of white moms," she said, "and black, brown, and indigenous women have been on the forefront of liberation movements for centuries."

By midafternoon the crowd, flanked by bicycles and vehicles as a security measure, had marched several blocks to the construction site for the King County Children and Family Justice Center, a juvenile detention facility and courthouse, where dozens of people toppled fences and set fire to five construction trailers. The blazes appeared to have destroyed the trailers and sent large plumes of smoke into the air before the fire department arrived.

King County Executive Dow Constantine announced on Friday that the facility, commonly known as the "youth jail," would close by 2025 in line with the county's goal of zero youth detention. The facility has been the subject of protests for years by groups calling for an end to youth incarceration.

Shortly after the fire, protesters smashed the windows of a Starbucks, which has become a target for its donations to the Seattle Police Foundation.

The fire and subsequent clashes outside a police department precinct resulted in the police declaring the protest a "riot" and attempting to disperse the crowd with munitions such as pepper spray, blast balls and rubber bullets. The protesters came prepared, with many wearing protective gear.

"After seeing what happened in Portland, I feel it is important to put my body on the line," Megan Barry, who identifies as white, said before the march began. Barry, a marketing professional from Gig Harbor, 22 miles southwest of Seattle, was attending her first protest since mid-June. On May 30, she said, she was hit with tear gas when police tried to disperse the first large demonstration in downtown Seattle after Floyd's death.

On Saturday, she was arrested for "failure to disperse," when she claims she was moving backward from the police line after having been tagged with blue ultraviolet dye. She was released about midnight.

"I have the luxury of going home and acting like nothing is going on," she said. "I want to hold myself accountable."