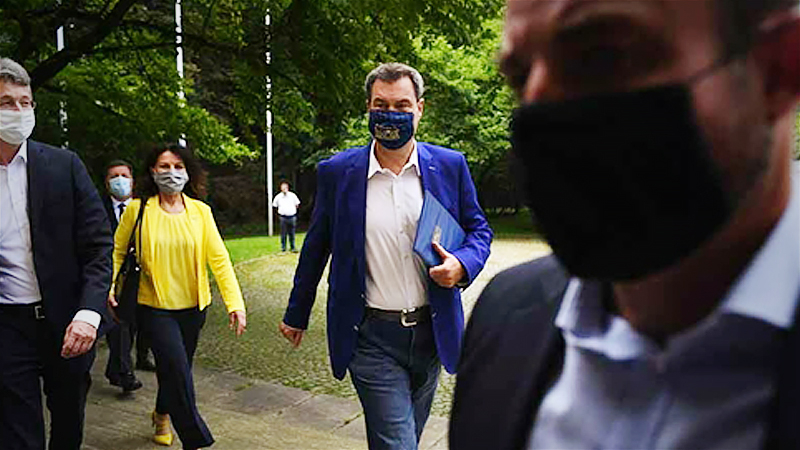 Markus Soeder, Bavaria's premier (center) wears a protective face mask featuring a Bavarian coat of arms as he arrives for a news conference in Munich , on July 23, 2020. MUST CREDIT: Bloomberg photo by Andreas Gebert.

German officials are stepping up calls for people to stick to containment efforts after an outbreak among migrant workers at a farm in Bavaria provided the latest warning that the coronavirus pandemic is far from over.

Germany is closing in on an agreement to make testing, rather than self-isolation, mandatory for travelers returning from high-risk areas as Europe's biggest economy seeks to limit the number of infections being brought back from vacation. A higher infection rate during summer makes a renewed spike during the fall more likely, Braun said.

In the Bavarian town of Mamming, authorities are increasing testing after more than 170 out of about 500 workers at a local farm were found to be positive for the virus. Most of the people are migrants from Romania, and the facility was put under mandatory quarantine behind a metal fence.

"We must be careful that the many, many isolated cases in Germany don't turn into a slight, creeping second wave," Bavarian Premier Markus Soeder said Monday at a news conference in Munich, warning people to stick to hygiene and social-distancing rules. "We cannot completely prevent coronavirus, but our goal must be to identify outbreaks in time."

More than 60% of recent new cases are in Bavaria, North Rhine-Westphalia and Baden-Wuerttemberg, the Robert Koch Institute said in its latest virus report published late Sunday. The gauge of the disease's spread was at 1.22 Sunday, down slightly from 1.24 the previous day. Anything above 1.0 means that infections are rising.

Germany has been widely praised for its swift reaction to the virus, but officials remain on high alert for a renewed outbreak.

There have been 206,667 infections in the European Union's most-populous nation, compared with more than 270,000 in Spain and almost 250,000 in Italy, according to data from Johns Hopkins University.

While new infections jumped over the weekend to around 700 a day, that's still well below the peak of nearly 7,000 at the height of the spread in March and April. Monday's new cases declined to 389.

The summer travel season has become a source of concern. The RKI said Sunday that covid-19 cases are "increasingly being identified among people returning from travels outside of Germany."

At Austria's Wolfgangsee lake resort, a favorite summer destination of many Germans, including the late Chancellor Helmut Kohl, authorities are grappling with an outbreak that started among hotel trainees and spread via their after-work drinks.

The cases threaten the government's hopes for a successful summer season that would help make up for the sudden end of the skiing period in March due to outbreaks in some resorts.

A drive-through testing site set up on Saturday took around 1,200 swipes from tourism staff and guests over the weekend, regional health secretary Christine Haberlander said in an interview with public radio Oe1. There have been 53 positives, with about 400 results still outstanding.

German authorities have already moved to increase testing capacity at airports. Mandatory testing would be the next step.

"I consider such an obligation important and necessary, and we must see how we can find a nationwide solution," Bavarian Health Minister Melanie Huml, who is a qualified medical doctor, told ZDF television on Monday. "We acted very, very quickly and very, very decisively" to contain the outbreak in Mamming.