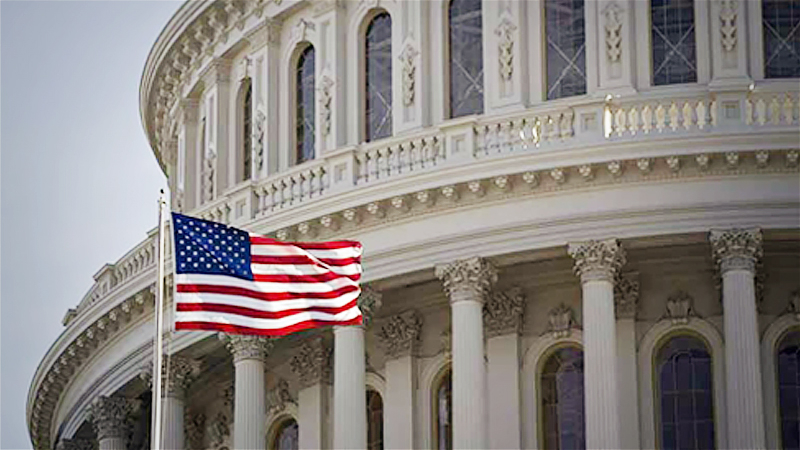 The American flag flies next to the dome of the U.S. Capitol Jan. 15, 2017. MUST CREDIT: Bloomberg photo by Andrew Harrer.

Senate Republicans propose cutting supplemental unemployment benefits to $200 weekly from $600 until states are able to create a system that would provide 70% of a laid-off worker's previous pay, according to two people familiar with the plan.

The plan, which was agreed to by the Trump administration, calls for a two-month transition and then allows states to apply for a waiver for up to two additional months if they can't implement the new calculation, according to the people, who spoke on condition of anonymity because the plan hasn't been made public.

Senate Majority Leader Mitch McConnell and other top Republicans set to release a series of bills that represent the $1 trillion GOP plan for a new virus stimulus package after the Senate convenes Monday at 4:30 p.m. in Washington, despite persistent divisions among his fellow Republicans. That will mark the starting point for negotiations with Democrats, who've previously proposed a $3.5 trillion package.

The expanded unemployment benefits that were part of the March economic rescue began running out Saturday, adding urgency to negotiations on the next round of relief. There are signs, including filings for unemployment benefits, that a nascent rebound from pandemic shutdowns is stalling. Congress has only two weeks before lawmakers are scheduled to leave Washington for an August break.

Most states experienced significant delays in processing the current flat-rate supplemental benefits as they dealt with an unprecedented flood of claims and antiquated computer systems. The same technology hurdles may require time to implement the new calculation.

All states currently provide close to 50% wage replacement. The federal government would come in to make up the difference to bring a recipient's wage up to the 70% level once the transition is complete.

The plan for unemployment insurance is sure to draw strong opposition from Democrats, who wanted to continue the $600 payment that was part of the economic rescue package approved in March through the end of the year.

They have argued that the system should be kept simple, but many Republicans, such as Texas Sen. Ted Cruz, say the $600 payments mean some people are getting more in benefits than they earned from wages, making them reluctant to return to jobs.

House Speaker Nancy Pelosi has rejected cuts to the $600 level and on Monday called for negotiations to begin on a bipartisan solution immediately after the GOP plan is introduced in the Senate.

McConnell's expected unveiling comes after top Trump administration officials, Treasury Secretary Steven Mnuchin and White House Chief of Staff Mark Meadows, spent much of the past week struggling to hammer out some of the differences with Republican lawmakers.

Meadows and Mnuchin were at the Capitol again Sunday to work on what Meadows said were the "final touches" of the package.

But the GOP is hardly unified, and there's a world of difference with what Democrats demand.

"Half the Republicans are going to vote no" on any additional stimulus, South Carolina Republican Senator Lindsey Graham said Sunday on Fox News Channel. "And a lot of Democrats are going to insist on $3 trillion, which would be way too much."

McConnell said on Friday that he expected Congress would pass something by "the end of the next few weeks." Graham predicted Congress would reach a deal by the first week of August, and Mnuchin said the negotiations can move "very quickly." That and a September government funding bill are likely the last chances to act before the November election.