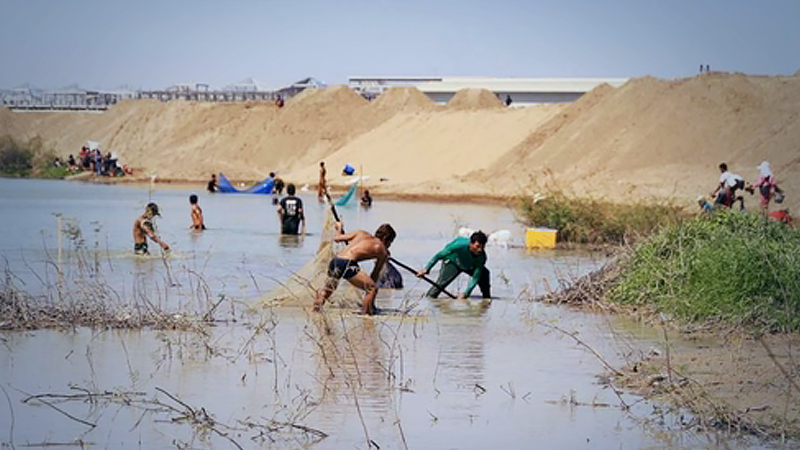 The report said 370,000 to 380,000 cubic metres of wastewater is discharged into Boeung Tompun lake every day and it is filled with 77.66 million cubic metres of sand. Photo Credit: Phanom Penh post/Hong Menea

A research report released by four civil society organisations on Monday warns that development in the Boeung Tompun lake puts 1.2 million Phnom Penh residents, or half the city’s population, in danger of floods.

One thousand families are at risk of eviction, loss of income and food insecurity from unsustainable private development, said the human rights groups report – Smoke on the water: A human rights and social impact assessment of the destruction of the Boeung Tompun/Cheung Ek wetlands.

The 70-page report in Khmer and English was published by the Cambodian League for the Promotion and Defence of Human Rights (Licadho), Cambodia Youth Network (CYN), Equitable Cambodia (EC), and Sahmakum Teang Tnaut (STT).

“If this activity continues, more than 1,000 families will be forced to leave their homes. The area of Boeung Tompun lake has been cut and divided for development companies according to a sub-decree between 2017 and 2019, and the area of the lake wetlands, which previously covered at least 1,500ha, will be reduced to only 107ha,” the report said.

The four organisations cited several human rights and environmental impacts, including evictions, the loss of livelihoods, the loss of wildlife species and pollution of the Bassac and Mekong rivers due to inflow of untreated wastewater.

However, the report makes clear that the findings are only estimates and intended to inform the government of risks posed by the projects.

STT executive director Soeung Saran said: “The Government has the responsibility to ensure that it protects the people from human rights abuses. This report is designed to highlight the risks so the government can take action now where appropriate.”

The four organisations made recommendations for the government to consider in developing the area.

The groups called on the government to adhere to human rights and promote transparency, including releasing the names of sand-dredging environment licence holders.

“There is no need to respond to this report because the results of the assessment are not clear, independent or balanced,” he said.

Government spokesman Phay Siphan said on Monday that the report does not address the realities of the situation because the government and Phnom Penh Municipal Hall have already studied the environmental impact and prepared proper water avoidance measures to prevent flooding.

He said Boeung Tompun lake is a reservoir for water from the Mekong in the rainy season and rainwater from highlands such as Kampong Speu, and parts of Takeo province.

It is also a reservoir for water flowing from the Stung Meanchey and Prek Ho rivers. The city has built a canal to prevent water from those sources flowing into the lake and diverting it to Ta Mok Lake.

“I do not understand if the writers have studied Phnom Penh. Phnom Penh has been developing land from water areas for development since 1958. At that time Orussey Market was a lake. Phnom Penh only had Wat Phnom and the Royal Palace,” he said.

He said drainage from the lake into the Mekong was also unaffected because the water was pre-treated. He said human needs are developing with a clear study of the impact.