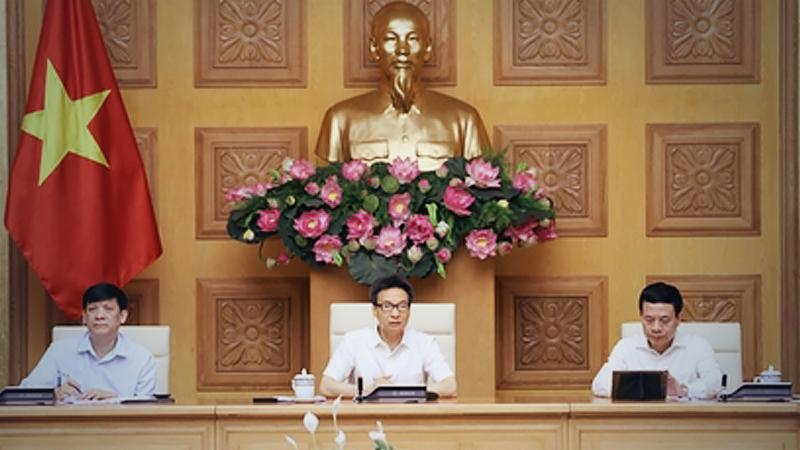 Speaking at a meeting with the National Steering Committee for COVID-19 Prevention and Control on Monday morning, he said genetic analysis revealed they were infected with a strain of SARS-CoV-2 new to Việt Nam that is common in several regional countries.

It is a more contagious strain, he said, adding that it's the sixth strain recorded in Việt Nam.

Experts at the meeting said that preliminary epidemiological investigations showed four COVID-19 cases in the community confirmed over the past weekend were linked to three hospitals in the central city of Đà Nẵng.

An additional 11 cases announced on Monday evening were all linked to Đà Nẵng Hospital.

Drastic measures, including those utilised in handling large hotspots like Hà Nội’s Bạch Mai Hospital, should be adopted, he said.

“It is necessary for us to stamp out the pandemic quickly while maintaining the stability and development for society. Thus, we need to make the right decision,” Đam said.

He said that the role of epidemiological investigation and collaboration among the police and army in determining the source of transmission were extremely important.

“Not only Đà Nẵng but all provinces and cities must review symptomatic of patients who visit private hospitals and clinics and strictly control the entry of foreigners.”

The Ministry of Health (MoH) was asked to take samples for testing with the deployment of test kits manufactured in Việt Nam.

Drastic measures would be adopted but staying and ensuring socio-economic stability were also important, the deputy PM said.

The Ministry of Health has sent experts to Đà Nẵng to help contain the outbreak and help track the source of infection.

A lockdown order would be imposed on the three hospitals like the one applied on Bạch Mai Hospital in April. The ministry will provide utmost support for the city in the quarantine, treatment and tracing the source of infection.

To prevent the spread of the disease, experts suggested all people who return home from Đà Nẵng and are linked to the three hospitals must be quarantined for 14 days while those returning from the city but are not linked to the hospital must make a health declaration.

They also said it was essential to impose social distancing in Đà Nẵng City.

Experts said not only Đà Nẵng but other localities should closely monitor suspected cases while strengthening control of epidemiological safety at medical facilities.

Participants at the meeting agreed that ministries, agencies and localities should stay alert and prevent illegal entry into Việt Nam.

All those who have illegally entered the country should be penalised in accordance with regulations.

Nguyễn Mạnh Hùng, Minister of Information and Communications, called on local governments and residents to collaborate in completing electronic health declarations via the NCOVI and Bluezone apps.

Over the past weekend, three residents in Đà Nẵng and one resident in Quảng Ngãi were confirmed positive for SARS-CoV-2 virus. They are patients No 416, 418, 419, and 420, of whom patient 416 and patient 418 are in severe health conditions as they need ventilators. A further 11 patients were recorded as positive on Monday evening, bringing the national total to 431. — VNS