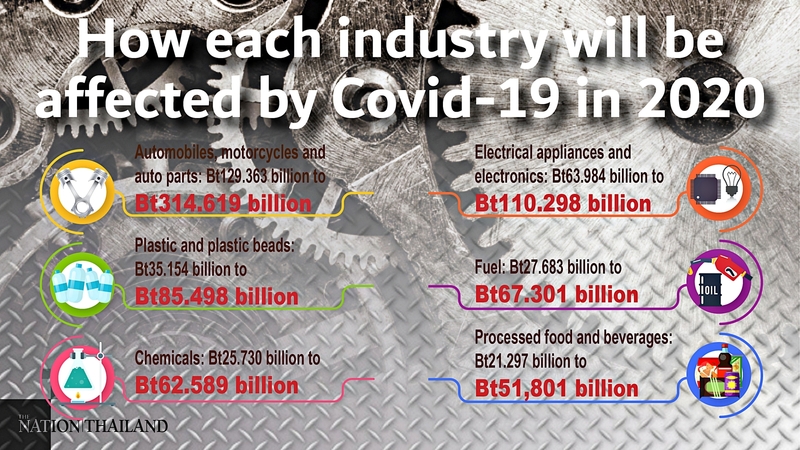 The University of Thai Chamber of Commerce (UTCC)’s Centre for International Trade Studies has estimated that the Covid-19 pandemic will reduce the value of Thai trade by Bt423.05 billion to Bt1.02 trillion.

The centre’s director Aat Pisanwanich said the industries most affected by the pandemic were automobiles, motorcycles and auto parts, whose values are estimated at between Bt129.36 billion and Bt314.619 billion.

The other industries to be affected include electrical appliances and electronics, plastic, fuel, chemicals and food and beverages.

He said exports in the first half of this year dropped by 7.1 per cent and is expected to hit 20 per cent in the worst-case scenario as the number of Covid-19 patients across the world continue rising daily and the demand of products from Thailand’s trade partners keeps dropping.

Other factors affecting Thai exports are the China-India conflicts as well as the conflict between China, the US and Hong Kong, along with the upcoming US presidential elections.

However, he said, the relaxing of lockdown measures in several countries is benefiting Thai exports.

In the worst-case scenario of no vaccine being found this year, the centre estimates that Thailand will lose Bt1.028 trillion in export.

The director, however, reckons that sales of some products such as processed food and beverages, seasoning, animal feed and rubber gloves may rise amid the pandemic.