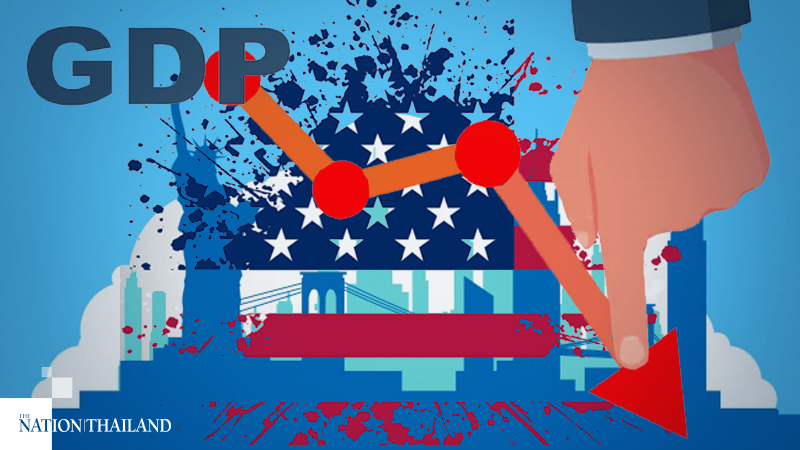 WASHINGTON - The U.S. economy shrank 9.5% from April through June, the largest quarterly decline since the government began publishing data 70 years ago, and the latest, sobering reflection of the pandemic's economic devastation.

The second quarter report on gross domestic product covers some of the economy's worst weeks in living memory, when commercial activity ground to a halt, millions of Americans lost their jobs and the nation went into lockdown. Yet economists say the data should also serve as a cautionary tale for what's at stake if the recovery slips away, especially as rising coronavirus cases in some states have forced businesses to close once again.

GDP shrank at an annual rate of 32.9%, according to the Bureau of Economic Analysis, the agency that publishes the statistics on quarterly economic activity. While it usually stresses the annualized rate, that figure is less useful this quarter because the economy is unlikely to experience another collapse like it did in the second quarter.

Still, while a tailspin at the second quarter rate is unlikely, the nascent recovery that began appearing earlier this summer appears to be in jeopardy.

On Wednesday, Federal Reserve Chair Jerome Powell warned that the most recent surge in infections has begun to weigh on the economy, while reemphasizing that a recovery can't be sustained unless the virus is under control.

"We're still digging out of a hole, a really deep hole," said Ben Herzon, executive director of IHS Markit. "The second quarter figure will just tell us the size of the hole we're digging out of, and it's a big one."

A key factor in the recovery may be what lawmakers do.

Congress is divided over another round of stimulus, including over whether to extend enhanced unemployment benefits, which otherwise expire Friday. In California, Arizona, Texas, Florida and Michigan, intensifying outbreaks have forced authorities to dial back their reopening plans and restrict business activity once again.

The GDP figures show how severely the economy suffered and could "jolt Congress into action" heading into August, said Wendy Edelberg, director of the Hamilton Project and a senior fellow in economic studies at the Brookings Institution.

"One thing that policymakers, and all of us readers of this report, can take from it is that this is the outcome we want to avoid," Edelberg said. "We want to avoid having to go through such a dramatic shutdown again, because this is the pain that it causes."

The economy collapsed in April on the heels of a nationwide shutdown. That month, the unemployment rate spiked to the highest level since the Great Depression. April retail sales plunged 16.4%, the largest drop on record.

In May, big-name companies started filing for bankruptcy, including retailer J.C. Penney and rental car company Hertz. At the same time, states began easing restrictions on gatherings and businesses, igniting new hopes for a surprising turnaround. The May unemployment rate dropped as the labor market picked back up and retail sales popped 17.7%. President Donald Trump and other White House officials said the nation was on track for a V-shaped recovery, even as the Federal Reserve emphasized that controlling the virus was key to a sustained turnaround.

The economy added a record number of jobs in June, as the workforce recovered about 1 in 3 of the jobs lost during the crisis. But measurements for June's report were taken when the wave of coronavirus cases was at a low ebb in the United States - 35 states set new infection records in July alone.

There are new signs the economic recovery is faltering, and Powell has noted that rising coronavirus cases are beginning to weigh on the economy. On Wednesday, Powell said some measures of consumer spending, based on debit card and credit card use, have moved down in the past month. Hotel occupancy rates have flattened out, Powell said, and Americans are not going to restaurants, gas stations and beauty salons as much as they had been earlier in the summer.

"On balance, it looks like the data are pointing to a slowing in the pace of the recovery," Powell said during a news conference Wednesday. "I want to stress it's too early to say both how large that is and how sustained it will be."

Kelly Lightfoot, 50, has run Happy Kids Maui, a child-care business, for more than two decades. In good times, she goes "100 miles an hour" managing the office staff and between 50 and 80 nannies who watch the children of vacationing tourists on three islands.

But in March, Hawaii's governor locked the state down and adopted a strict quarantine that all but stopped the flow of visitors from the mainland.

Business came to a screeching halt, she said: "It was our spring break. We had big, giant bookings for March, April, May - I had to refund all that money."

A recent Yelp analysis found Hawaii has been hit harder by coronavirus-related business closures than any other state. Lightfoot said she's slashed her spending during the lockdown. All the paychecks and expenses she would have put into the islands' economy between March and September have gone for good. But she's still paying two office staffers, because she's determined to reopen and can't afford to lose skilled workers.

"We've been around for too long to just throw in the towel," Lightfoot said. "I started from pretty much nothing. I'm sure I can do the same thing again."

Beth Ann Bovino, chief U.S. economist at Standard & Poor's Global Ratings Services, compared the massive GDP shock to the economy as akin to a "cardiac arrest." But even such a sharp, deep shock was not felt by all Americans equally.

"If you sliced it all up equally, we'd all get a certain sliver," Bovino said. "But that's not how things work. There are a lot of people who are in much worse situations than others."

The Commerce Department's GDP data go through multiple revisions, even in normal times. And now the pandemic is only amplifying the uncertainty in the process. Constance Hunter, chief economist at KPMG, said later revisions will help clarify what happened with imports and exports, for example.

With so many questions hanging over the economy, rapid data on restaurant closures, foot traffic, even visits to doctors will help fill in the spotty picture of what is happening across the nation, Hunter said.

She said it's more helpful to think about economic activity during the pandemic in what she's dubbing "FOGO," or a "fear of going out." That gauge will be key to understanding when people feel comfortable easing back into their pre-pandemic routines. "And covid is going to drive the bus on that," she said.