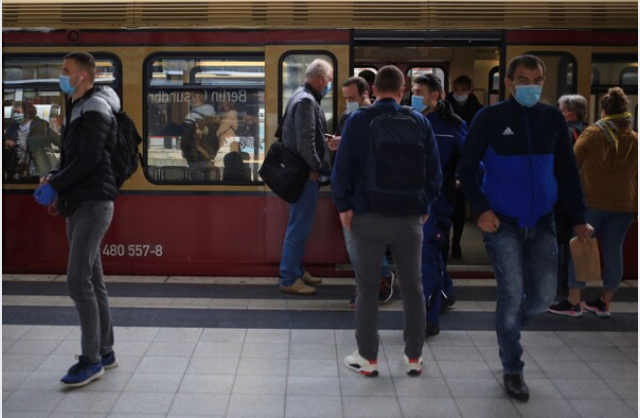 Commuters alight from an S-Bahn train at Gesundbrunnen station in Berlin, Germany, on May 4, 2020. MUST CREDIT: Bloomberg photo by Krisztian Bocsi.

Germany's economy plunged into a record slump in the second quarter, when virus restrictions slammed businesses and households across Europe, destroying jobs and prompting an unprecedented policy response.

Output fell 10.1%, the most since the series began in 1970, with declines in exports, consumer spending and investment. The economy is already recovering, but the threat of job losses, as well as consumer and business worries, mean it could be slow going. A separate release on Thursday showed euro-area economic confidence improved slightly in July and remained far below its pre-crisis level.

The pace of Germany's rebound will rely in part on the effectiveness of the government's 130 billion-euro ($153 billion) stimulus approved in June and how fast demand for German exports can return to pre-pandemic levels. Mounting concerns about a resurgence in viral outbreaks is adding to the uncertainty, even after an unprecedented European Union fiscal deal championed by Germany and France.

A similar picture is playing out across the euro-area, which may have suffered a 12% contraction in the quarter. Governments have stretched their budgets on health and welfare spending, and the European Central Bank launched an emergency bond-buying program to get the economy through the crisis.

Job cuts remain a major risk for the outlook. Germany's national airline Deutsche Lufthansa is slashing thousands of jobs, and carmaker Daimler is reducing hours for some workers for a year. Figures due Friday may show even more severe slumps across Southern Europe. That partly reflects tougher lockdowns and damage to the crucial tourism sector in Italy and Spain.

The euro weakened 0.5% against the dollar as the greenback rebounded versus major currencies. German government bonds maintained their gains after the data, keeping yields on 10-year securities down 3 basis points to minus 0.53%.

In a separate release, the European Commission said confidence in the euro-area outlook rose more than economists expected in July, with businesses becoming more upbeat about demand. Still, at 82.3, the index is more than 20 points below its level in February. Unemployment in the region rose to 7.8% in June, the highest since early 2019.

Germany's second-quarter contraction was milder than in other major euro nations as it had less severe containment measures at the height of the health crisis. It was also able to utilize long-established support measures that allowed companies to keep millions of staff on payrolls, and prevent a jump in joblessness.

"The labor market is still under pressure due to the corona pandemic, even if the German economy is on a recovery path," Daniel Terzenbach, regional board of the Federal Employment Agency, said in a separate release on Thursday.

The country's fiscal situation was also stronger, allowing the government to mobilize trillions of euros in various rounds of stimulus to help struggling businesses and households with loan guarantees, equity injections, and additional liquidity.

A detailed breakdown of what drove the second-quarter slump is due on Aug. 25. Inflation data is due later on Thursday, with prices forecast to have gained only 0.1% in July from a year ago.