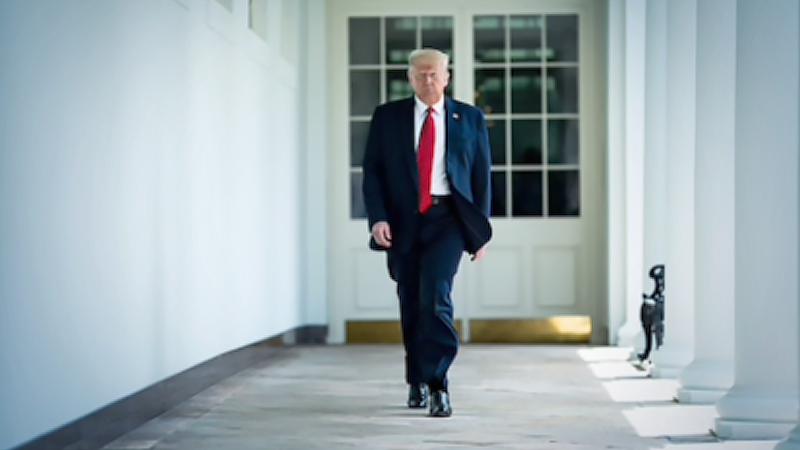 Leaving a lunch on Thursday, GOP senators appeared to be coalescing around a proposal drafted by Sens. Ron Johnson, R-Wis., and Mike Braun, R-Ind., that would continue the expanded jobless benefits at $200 per week or an amount about two-thirds of an individual's average wage, rather than the current $600-per-week supplement approved by Congress in March. The Republicans' plan was not finalized.

But the rapid shift in strategy reflected the immense pressure that Republicans are facing as the expanded jobless benefits are set to expire Friday. On Thursday afternoon, Senate Majority Leader Mitch McConnell, R-Ky., took procedural steps to set up a legislative path to swiftly pass any short-term extension of jobless benefits should there be a plan that could pass the Senate.

President Donald Trump on Wednesday urged Congress to quickly approve some extension in unemployment benefits and a federal eviction moratorium that expired last week. White House Chief of Staff Mark Meadows on Thursday told reporters that Trump would support a one-week extension of unemployment benefits at $600, an approach rejected by Democratic leaders as a "stunt." Meadows and Treasury Secretary Steven Mnuchin have also expressed alarm about letting the unemployment benefit expire altogether.

"I think there is a sensitivity to the cliff that we're facing," Sen. Lisa Murkowsk, R-Alaska, told reporters Thursday.

The move by McConnell, senators said, was primarily meant to try to break the Senate's logjam over not only the expiring benefits but on a broader relief package meant to address the ongoing economic and public health crisis imposed by the novel coronavirus. The proposal by Johnson and Braun is slightly less generous than Senate Finance Committee Chair Chuck Grassley's, R-Iowa, initial proposal on unemployment, released Monday.

The Cares Act approved by Congress in March gave every person on unemployment a $600-per-week bonus on top of their typical state unemployment allocation, but the additional federal benefit expires Friday. The Johnson-Braun proposal would gives states the option to extend that benefit at $200 per week instead of $600.

It also allows states to switch to a complicated wage replacement scheme in which the state and federal government would provide a replacement of two-thirds of what the worker was making before losing his or her job.

Democrats continued to scoff and reject the Republicans' latest play, noting that the emerging plan from the GOP on temporary jobless benefits was less generous than what had been included in a bigger, $1 trillion Senate Republican plan released this week.

"The bottom line is very simple," Senate Minority Leader Chuck Schumer, D-N.Y., said. "This new proposal moves things even backward. Instead of a 30% cut from what people are getting, it's a 33% cut. And we all know that the proposal that is in existence now has kept millions out of poverty."

Earlier, McConnell and Schumer exchanged the most biting criticism yet of each other's coronavirus relief proposals - clouding the prospects of even a short-term deal. The political acrimony also came as statistics released Thursday showed that the U.S. economy shrank 9.5% from April to June - the largest quarterly decline since the government began publishing the data seven decades ago.

But the discouraging economic figures did little to move the needle in Congress; senators instead consumed themselves with partisan bickering and political theater.

A trio of conservative senators, led by Johnson, took to the floor to try to unanimously pass his temporary unemployment insurance proposal.

That effort from Republicans was summarily blocked by Schumer, who led a group of Democrats to try to unanimously pass the $3 trillion Democratic coronavirus plan that the House cleared in May. That, too, was blocked - this time by Republicans.

The procedural shenanigans were not meant to enact policy, but rather to help further the political blame game as Congress prepared to leave town without an agreement. And a pair of dueling speeches on the Senate floor from its top two leaders also appeared to be aimed at setting up political blame as Congress remained on the cusp of failure to reach a deal as expanded jobless benefits for about 20 millions Americans were set to expire.

One Republican pollster, who spoke on the condition of anonymity to freely discuss private conversations, said there is growing alarm among GOP lawmakers about the political consequences of letting the unemployment benefits lapse.

The approaching deadline amounts to a financial cliff for consumers that could send the economy reeling. Republicans have increasingly talked up a potential short-term extension of the jobless benefits as negotiations continue on a larger deal, but Democrats - who have had a comprehensive plan since May - have refused that option.

In a floor speech earlier Thursday, McConnell criticized the $3 trillion Democratic plan as a "totally unserious proposal" and accused Democratic leaders of refusing to allow their rank-and-file members to engage in discussions with Republicans. But McConnell has largely extricated himself from the primary negotiations on the next phase of coronavirus legislation as internal divisions among Republicans weaken his leverage.

McConnell was followed by Schumer, who noted that the majority leader said that about 20 GOP senators are expected to oppose any plan and that Republicans had wasted precious time in responding to the pandemic, which has killed more than 150,000 people in the United States.

Schumer said Republicans "dithered for months" and then released a "half-baked, halfhearted proposal of half-measures." He also noted that the main negotiations were among him, House Speaker Nancy Pelosi, D-Calif., Meadows and Mnuchin - and not McConnell.

"I would remind him, he refuses to go into the room when Speaker Pelosi, Secretary Mnuchin, Chief of Staff Meadows and I sit in there," Schumer said. "Once again, Senator McConnell engages in 'Alice in Wonderland' tactics and speeches and words. What he says is exactly the opposite of what is true."

The principals - Pelosi, Schumer, Mnuchin and Meadows - are scheduled to meet again Thursday night at 8 p.m. The late meeting was to accommodate the House speaker, who traveled to Atlanta for the funeral of Rep. John Lewis, D-Ga., who died July 17.

Meadows met with McConnell in his Capitol office Thursday afternoon. The White House chief of staff said Trump would support a short-term deal that addresses the expiring benefits "in a meaningful way."

"But it seems like the Democrats both in the House and in the Senate want to have their $3.1 trillion special interest package passed at the expense of enhanced unemployment for many people who are still needing that," Meadows said. "I fail to see the logic. I fail to see the compassion."