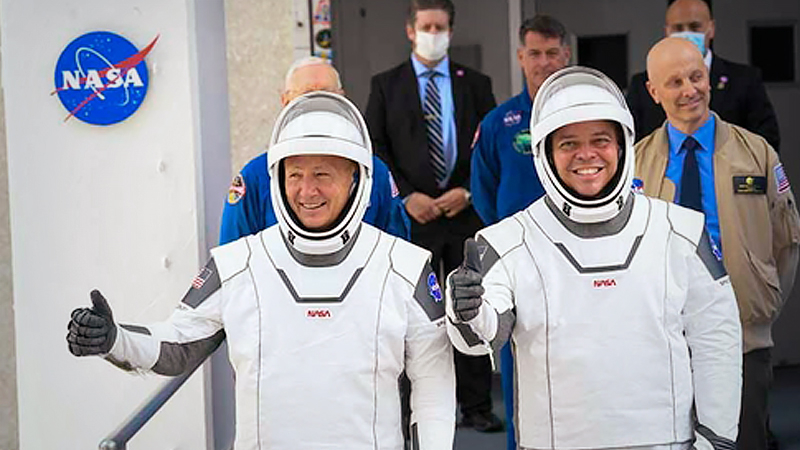 NASA commercial crew astronauts Doug Hurley, left, and Bob Behnken leave for their flight aboard the SpaceX Falcon 9 rocket on May 27, 2020. MUST CREDIT: Washington Post photo by Jonathan Newton

Despite Hurricane Isaias targeting the east coast of Florida this weekend, NASA and SpaceX are continuing with plans to return a pair of American astronauts from the International Space Station, hoping Isaias will miss at least some of the seven designated landing sites arrayed on either side of the Florida peninsula.

If all goes according to plan, NASA astronauts Bob Behnken and Doug Hurley will climb aboard their SpaceX Dragon spacecraft, and undock from the station at about 7:34 p.m. Saturday and splashdown at about 2:42 p.m. Sunday, either in the Atlantic Ocean or the Gulf of Mexico.

With the storm predicted to churn up Florida's Atlantic coast Sunday, just as the astronauts would be headed home, officials said that it a Gulf landing would be more likely if they do proceed with a landing attempt.

The teams will continue to closely monitor the storm and "evaluate impacts to weather around the Florida peninsula," NASA said in a statement late Thursday. It said NASA and SpaceX would make a decision on a primary landing site about six hour before the undocking.

There's no rush to bring the crew home, however, especially since it would be the first time NASA astronauts splashed down at sea since Apollo-Soyuz, the joint U.S.-Soviet mission, in 1975.

The spacecraft can stay on the space station for up to about 120 days, and is only about halfway through that timeframe. "The systems on Dragon are doing very well," Steve Stich, NASA's commercial crew program manager, said earlier this week. "The spacecraft is very healthy."

He said the spacecraft was inspected using a robotic arm, and a team of engineers from NASA and SpaceX looked at the data. The "results were very favorable," Stich said. "There were no areas on the vehicle that were of any concern for re-entry."

He said flight controllers would be patient for the most opportune moment, calm seas and gentle winds, ideally under 10 m.p.h., before committing to a return.

"We have plenty of opportunities here in August, and we're in no hurry to come home," he said.

Speaking to reporters from the station Friday, Behnken and Hurley, both veteran astronauts, said they were looking forward to getting home, but would be patient.

The spacecraft has three days worth of "consumables," oxygen, food and water, in case the spacecraft undocks but then needs to stay in orbit before committing to a return, officials said.

Behnken and Hurley lifted off on a SpaceX Falcon 9 rocket from the Kennedy Space Center on May 30, the first flight of NASA astronauts from United States soil since the Space Shuttle was retired in 2011. It also marked the first time a private company flew astronauts to orbit. Along with Boeing, SpaceX is under contract from NASA to develop spacecraft capable of flying people to the station. And this mission, known as Demo-2, is designed to test the Dragon spacecraft to ensure it operates properly before NASA allows the company to fly operational missions of astronauts to the station.

Like the launch, the return journey is a perilous one. The spacecraft will be traveling 17,500 m.p.h. and hit the atmosphere with such force that flames will engulf the capsule, testing the heat shield. As it gets closer to Earth, two drogue parachutes will deploy, and then four main chutes are to guide the spacecraft down to the sea, where rescue crews will be standing by.

In the case of an emergency, Air Force search and rescue teams as well as contractors from ManTech, a private security company, will be on standby with C-17 cargo aircraft to deploy to either the Gulf of Mexico and the Atlantic. Another team is posted in Hawaii to respond if the mission goes way off course and lands in the Pacific.

"If the spacecraft comes down where it is supposed to, in the condition expected, then SpaceX is 100 percent responsible for the recovery of the crew and the spacecraft," said Mike McClure, a ManTech program manager who used to command the Air Force's rescue detachment. "If, however, the spacecraft lands someplace else, or the condition of the spacecraft and the crew drives SpaceX or NASA to request [Department of Defense] assistance, then our team will spring into action."

Despite the many challenges of a water landing, Hurley and Behnken said they were not concerned.

"Splashdown is closer than it was the last time we were asked questions about it," Behnken said. "But I still don't feel nervous about it. Really, we're focused on the things that we'll need to do to be as safe as possible as we come back."

It'll be a fairly long flight, some 18 hours between undocking and splashdown. And the astronauts will be busy monitoring the capsule's systems, making sure everything is on track and operating properly.

But they'll also have some time to get some rest.

"We'll spend a good share of that sleeping," Hurley said.