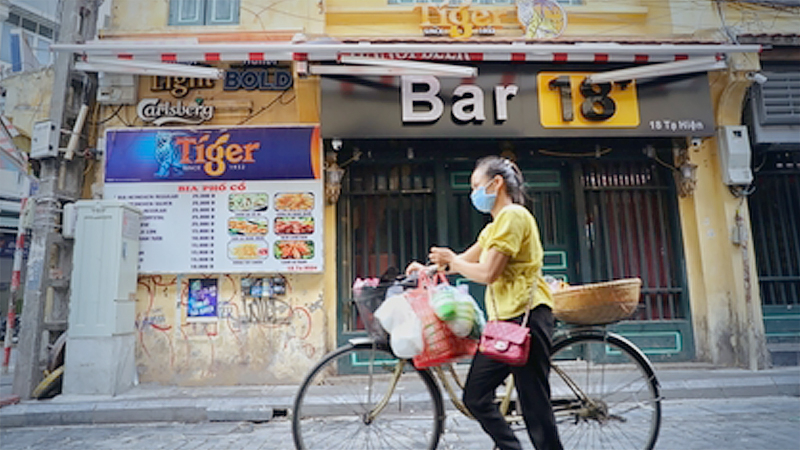 Starting August 1, all bars, karaoke venues and roadside stalls will have to close and large gatherings are banned in Hà Nội, the city’s authorities announced Friday morning, as the country battled a new wave of coronavirus after no local transmission cases for months.

Restaurants and malls are still allowed to open but social distancing measures will need to be applied, Chairman of Hà Nội People’s Committee Nguyễn Đức Chung said during a meeting on COVID-19 prevention and control.

Chung said the risks of virus spreading in Hà Nội is high as there are an estimated 54,000 people – double the figure available on July 27 – returning from the virus-hit central region since July 7.

Tourists' favourites, Đà Nẵng City and Quảng Nam Province, have become the latest coronavirus hotspots in the country in recent days with 79 and 16 cases recorded respectively, since the discovery of Patient No.416 on July 25 which marked the end of a 99-day streak of no new domestic community infections in Việt Nam.

In the last two days, Hà Nội has tested 18,500 people via quick testing methods and planned to finish testing all 54,000 people by August 1.

10 tests have returned positive – two in Nam Từ Liêm District, one in Hoàng Mai District, six in Gia Lâm District, and one in Thanh Xuân District.

All positive cases will be tested again via PCR diagnostics to confirm the infection, Nguyễn Khắc Hiền, head of the municipal health department, said at the meeting.

So far, eight of the suspected positive cases have been confirmed as negative while two in Gia Lâm are still awaiting the final results.

Trương Quang Việt, deputy head of Hà Nội’s Centre for Disease Control said that there might be still a number of COVID-19 cases popping up in Hà Nội in the coming days, and the health workers are relying on both testing results and symptom reports to screen and trace cases.

Out of 253 returning from Đà Nẵng who reported COVID-19 symptoms, 166 have been confirmed as negative while the results for the remaining 87 are pending, Việt said.

Việt warned that a number of quick testing sites in some districts in the city are facing overcrowding as the number of people coming to get tested surpassed initial expectations, given that many who have come into close contact with the returnees from central regions also want to get tested.

Chairman Chung demanded that Hà Nội CDC do its best to provide a sufficient amount of quick test kits for districts in the city to meet the goal of finishing testing for returnees from virus-hit regions.

“The quicker we do this, the faster we can obtain a correct and timely assessment of the current situation and prevent outbreaks,” Chung said.

Hà Nội’s leader asked for continued monitoring of all people returning from Đà Nẵng and Quảng Nam since July 8, especially those coming back on trains and coaches.

Hà Nội so far recorded two SARS-CoV-2 positive cases, both of them have travelled to Đà Nẵng.

The commerce department is tasked with preparing goods and watching the market to prevent surges in prices of essential goods.

The education department was asked to ensure hygiene for the upcoming high school examination scheduled for August 8-10.

HCM City has also ordered a shutdown of its bars, discos, karaoke venues and many types of large gatherings including non-urgent fairs and conferences, starting July 31, as the city received a large number of people returning from the central region after holidays. — VNS