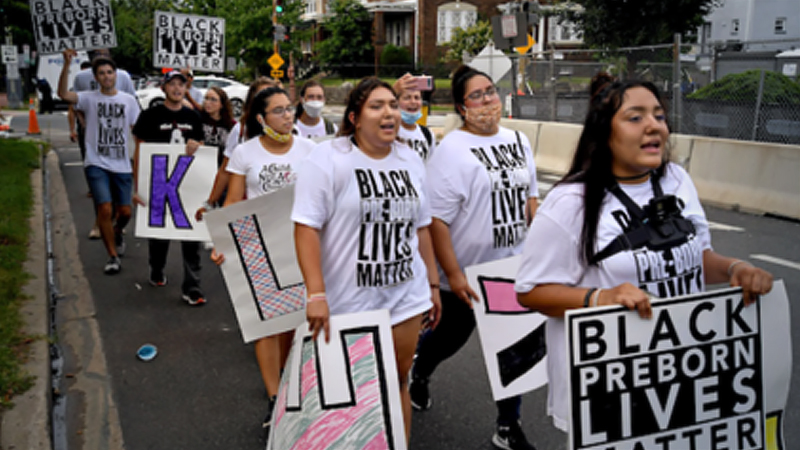 A march organized by the anti-abortion organization Students for Life of America and the Frederick Douglass Foundation nears the offices of Planned Parenthood in Northeast Washington on Aug 1, 2020. MUST CREDIT: Washington Post photo by Michael S. Williamson

WASHINGTON - Two protesters outside a Planned Parenthood facility were arrested and charged with defacing public or private property early Saturday, according to D.C. police and video footage.

Erica Caporaletti, a 22-year-old student at Towson University, and Warner DePriest, a 29-year-old D.C. resident, were writing "Black Pre-Born Lives Matter" with chalk on the sidewalk when police arrested them.

The arrests occurred just before 6 a.m., soon after a group of about two dozen people, led by the antiabortion advocacy group Students for Life of America, showed up to paint in the street of the 1200 block of Fourth Street NE as part of what they called a campaign to highlight the impact of abortion on Black communities.

Students for Life of America executive vice president Tina Whittington said police first warned that they would detain the group if they painted the street and then told them they could not write on the sidewalk with chalk.

Caporaletti and DePriest began to write faster when police moved to arrest them for defacing public property, rushing through the world "Pre-Born" when officers approached them, according to a video taken by the protesters. They were arrested and held for about an hour before returning to the scene to condemn the city for its response to their protest.

"This is government censorship," Caporaletti said through a bullhorn, with a Planned Parenthood sign behind her and a "Black Pre-Born Lives Matter" poster between her and a small crowd.

Representatives of Students for Life said they plan to sue D.C. Mayor Muriel Bowser, D, on the grounds that the police action violated their First Amendment rights.

The mayor's office did not respond to calls and emails seeking comment.

The arrest provides a window into ongoing controversy surrounding the painting of slogans on streets. Ever since Bowser commissioned the painting of "Black Lives Matter" on 16th Street NW near the White House in June, activists across the country have demanded the right to paint their own messages on asphalt. City officials have conceded in some cases, allowing protesters in the District, for example, to paint "Defund the police" next to Bowser's original declaration. But in other cities, including Tulsa, officials have ordered street paintings erased after opposing parties fought to make their mark on pavement.

It is illegal for people to write or mark on any public or private property without a permit. The District's Department of Transportation, which issues permits,did not respond to calls and emails seeking comment.

Representatives of the group led by the Students for Life of America and the Frederick Douglass Foundation said they received a D.C. police permit to hold an event and were told by an officer that he would not prevent them from writing on the asphalt.

The officer allegedly asked the activists to use tempera paint, Whittington said.

D.C. police declined to comment on the allegations but said they "did not issue a permit to put a message on the street," as those permits are issued through the D.C. Department of Transportation.

The group said it also sent a letter to Bowser requesting permission to paint on the street, writing, "Having opened the streets of your city for public expression, Students for Life of America requests the opportunity to add our voices to those concerned about how people of color are treated in America."

The mayor did not respond to the letter, according to Kristi Hamrick, a spokeswoman for the group.

On Saturday, calls to "abolish abortion" and "defund Planned Parenthood" continued long after the early-morning arrests. The group gathered at Frederick Douglass Court to pray for Black mothers and their "pre-born children" before marching along Fourth Street NE to the Planned Parenthood building, where they held letter posters that together spelled out "Black Pre-Born Lives Matter."

Cherilyn Holloway, the founder of Pro-Black Pro-Life, gripped a bullhorn and urged listeners before her and on Facebook Live to consider how racism extends beyond pregnancy.

"I would talk to my other Black friends who stand for racial justice, and I would talk about the abortion rate in the Black community . . . and they would look back at me and they would say, 'Well, what about when they are out of the womb?' " she said. "And I knew I could not be the only one who cared about both."

Holloway said that she cares most about support systems for low-income people and outlawing abortion, but that the nation's racial reckoning has made her feel more isolated in her beliefs.

"The Black Lives Matter movement has reinforced that for me, pro-life messaging has been really polarizing," she said.

Michele Hendrickson, the eastern regional director of Students for Life of America, said the antiabortion movement has been fighting racism for decades. "It's just we are finally being heard," she said.

For Kendra Evans, a 39-year-old from Capitol Heights, Md., the event Saturday touched on two issues that had shaped her life: Blackness and abortion in America.

As she marched up the paved hill and neared the gray building, where she believes generations of Black children have been killed, she recalled her own two abortions.

"There is more pressure as a Black person to survive," Evans said, explaining that the unique hardships that come with being Black made her feel that she had little choice but to have abortions. Fighting for racial justice and staunchly opposing abortion, she said, should go hand in hand.

As she rounded a corner, beginning her first march this year for Black lives, the Rev. Dean Nelson, the president and chief executive of the Frederick Douglass Foundation, clapped at her and shouted, "Frederick Douglass would be proud of you."