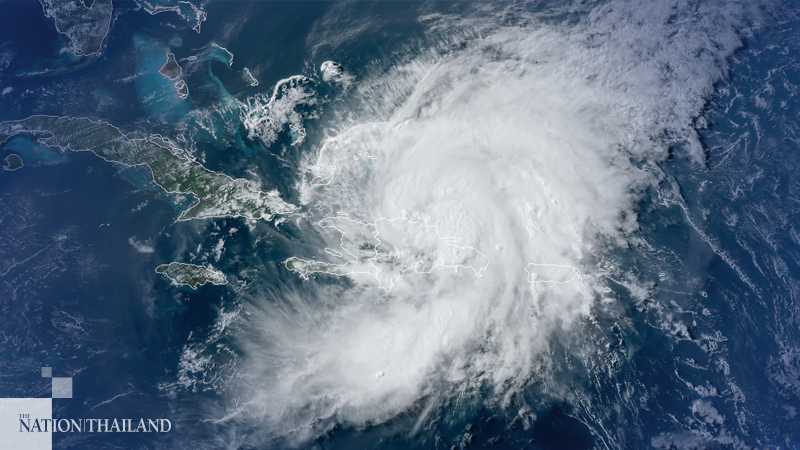 After veering away from making a direct hit in Florida, Hurricane Isaias is now on a collision course with the Carolinas and then with the rest of the Eastern Seaboard all the way to Maine through midweek.

The storm is predicted to crash ashore in the Carolinas Monday night at hurricane intensity between Charleston, S.C., and Wilmington, N.C., causing widespread power outages, coastal inundation of three to five feet in some areas, and heavy rains that could reach eight inches or more in some locations.

Winds had topped 70 mph in coastal South Carolina northeast of Charleston late Monday afternoon. The storm, which had been a tropical storm as it skirted Florida, regained hurricane status Monday evening when sustained winds ticked up to 75 miles per hour.

The storm will sweep into the Mid-Atlantic region on Tuesday, probably as a tropical storm, possibly flooding Virginia's Norfolk and Hampton Roads areas.

"Heavy rainfall will result in flash and urban flooding, some of which may be significant in the eastern Carolinas and the mid-Atlantic," the National Hurricane Center said.

The storm will then race into the Northeast, unleashing heavy rain, strong winds, and coastal flooding from New York to Maine. The winds could be especially intense along the Jersey shore and into New York City.

Hurricane and tropical storm alerts plastered the Eastern Seaboard from South Carolina to Maine on Monday.

Areas at particular risk of flooding include Charleston and Myrtle Beach, S.C., and Wilmington, N.C., where the National Hurricane Center says is in "danger of life-threatening" inundation along the coastline. A dangerous surge may also affect areas from the North Carolina Outer Banks to vulnerable areas in the Virginia Tidewater.

Peak wind gusts for coastal areas from central South Carolina to southern New England could reach 60 to 80 mph as Isaias makes its closest approach, with the highest waters likely near the South Carolina-North Carolina border when the storm makes landfall.

As of 8 p.m. Monday, Isaias was centered 60 miles east of Charleston, S.C., and about 60 miles south of Myrtle Beach, heading north-northeast at 16 mph. The storm contained maximum sustained winds of 75 mph, making it a Category 1 hurricane. A wind gust to 67 mph was reported recently at a weather station in Winyah Bay, east of Georgetown, S.C.

Radar showed heavy rain bands drenching the coastline from Charleston to Myrtle Beach, while wind gusts climbed to 40 to 70 mph. Charleston International Airport clocked a gust of 43 mph at 5 p.m., and Folly Beach Pier gusted to 57 mph. There have been damage reports associated with a possible tornado on Bald Head Island, N.C., south of Wilmington.

Into Monday evening, Isaias is forecast to parallel the coast of the southeastern United States, causing strong winds and squally weather in South Carolina before making landfall near the South Carolina-North Carolina border Monday night at or near hurricane strength.

As it moves north-northeastward, onshore winds gusting as high as 90 mph in parts of the coastal Carolinas will push waters onto the shoreline, piling high waves on top of the storm surge itself.

The largest storm surge is expected just north of wherever the center comes ashore, most likely in the zone from Edisto Beach, S.C., to Cape Fear, N.C. where water rises of three to five feet above ground level are possible if the maximum surge hits at high tide. A slightly lesser, but still dangerous, storm surge of two to four feet is projected along the North Carolina Outer Banks.

Areas susceptible to coastal flooding could see damage, particularly if the peak of the storm hits at the time of high tide. This includes Charleston, Myrtle Beach and Wilmington, N.C.

The water level at Springmaid Pier on Myrtle Beach, S.C. rose to at least 9.89 feet on Monday evening, with a surge of about 3.8 feet above the predicted tide level. That makes it the third-highest water level on record there, behind Hurricane Hugo in 1989 and Hurricane Matthew in 2016.

"A particularly high tide this evening in Charleston combined with torrential rainfall could produce widespread and dangerous flooding in low-lying areas around the Charleston Metro Area," the National Weather Service office serving Charleston stated Monday afternoon. The high tide in Charleston occurs at about 9 p.m. on Monday, and water officially rose above flood level at 8 p.m. However, winds turned offshore around the time of high tide, gusting to 80 mph at a buoy just off the coast.

Charleston has seen increasing instances of coastal flooding in recent years as sea level rise and land subsidence combine to make the city more vulnerable. The city saw a record 13 days with high tide flooding in 2019, according to a NOAA report that detailed the increasing frequency of so-called "sunny-day" or "nuisance" flooding that now occurs in the absence of a storm.

Storms such as Isaias pose a particular hazard since they raise water levels along the shore while dumping heavy rains, because water is difficult to pump out once the land is no longer higher than the sea.

The latest track of Isaias puts areas to the north of Charleston, including Wilmington, at risk for the greatest surge-related flooding overnight.

Over a broad area of the Carolinas, including inland locations, the National Weather Service predicts three to six inches of rain and isolated amounts to eight inches. Where the heaviest rain falls, flash, river and/or urban flooding could occur.

In addition to the wind, storm surge and rainfall hazards, Isaias will also pose the potential for waterspouts and tornadoes as the wind shear within the storm causes some individual storm cells to rotate.