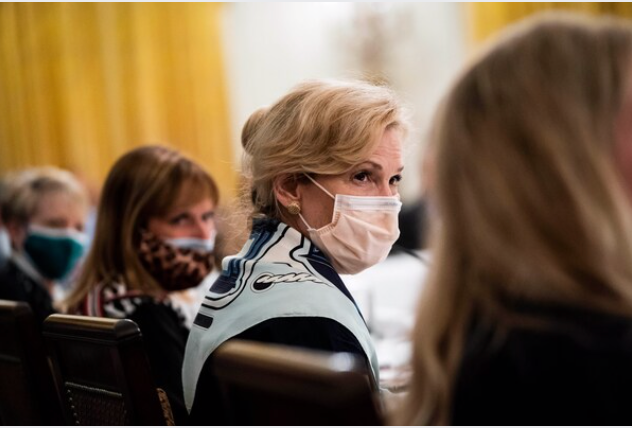 WASHINGTON - President Donald Trump further disparaged his senior health advisers on Monday even as the pandemic deepened its hold on the nation, as the White House's top coronavirus coordinator, Deborah Birx, joined Anthony Fauci and other scientists on the receiving end of the president's ire.

Birx - who built a career leading public health efforts against HIV/AIDS - quickly garnered Trump's favor earlier this year for publicly championing the administration's coronavirus response, becoming a prominent figure inside and outside the White House.

But she soon lost support within swaths of the scientific and medical community for seeming to minimize the virus and to enable Trump's rosy view of the pandemic. This past weekend, Birx lost the backing of the nation's top Democrat, House Speaker Nancy Pelosi of California, who privately called Birx "the worst" and publicly said she had no confidence in her.

On Monday morning, Birx appeared to lose ground with perhaps her most important constituency, Trump himself, who dismissed her as "pathetic."

"So Crazy Nancy Pelosi said horrible things about Dr. Deborah Birx, going after her because she was too positive on the very good job we are doing on combatting the China Virus, including Vaccines & Therapeutics," Trump wrote in a tweet. "In order to counter Nancy, Deborah took the bait & hit us. Pathetic!"

Trump was especially incensed that she did not strike a more optimistic tone about states that are doing well and by her praise for Pelosi, an ardent Trump critic, said one senior administration official, who like others spoke on the condition of anonymity to share details of private discussions. When asked about Pelosi's lack of confidence in the handling of the pandemic, Birx replied, "I have tremendous respect for the speaker. And I have tremendous respect for her long dedication to the American people."

In the interview, she also did not rule out the possibility that the nation's coronavirus death toll could double by the end of the year to 300,000 and seemed to suggest that, contrary to the president's stated desires, some schools should offer only distance learning this fall.

Trump was especially incensed by her praise for Pelosi, an ardent Trump critic, said one senior administration official, who like others spoke on the condition of anonymity to share details of private discussions. When asked about Pelosi's lack of confidence in the handling of the pandemic, Birx replied, "I have tremendous respect for the speaker. And I have tremendous respect for her long dedication to the American people."

Presumptive Democratic presidential nominee Joe Biden took to Twitter in response to Trump's tweet attacking Birx: "It's hard to believe this has to be said, but if I'm elected president, I'll spend my Monday mornings working with our nation's top experts to control this virus - not insulting them on Twitter."

Trump's criticism of Birx was another reminder that, while he demands absolute loyalty, he rarely repays it in kind. With more than 4.6 million Americans infected, more than 150,000 dead and the economy in shambles, Birx finds herself isolated with increasingly few allies even as she remains responsible for overseeing the nation's response to a cataclysmic crisis.

Angela Rasmussen, a virologist at Columbia University's Mailman School of Public Health, said that as a scientist, Birx has most damaged her credibility by seeming to dismiss some of the publicly available evidence.

"She's ignored the evidence and gone in the media and said things that are not based in evidence at all and even the most generous understanding of what she's said can't be justified by the data we have," Rasmussen said. "When you do something like that, you're not doing your job competently and it's really difficult to gain the respect of your colleagues when you're all scientists and you've shown such willful disregard for the science."

Birx first emerged as a household name in the early days of the pandemic, appearing at coronavirus news briefings alongside Fauci, an infectious-diseases expert. The duo formed a reassuring team of medical elders - Birx sometimes talked about her children and young granddaughter - who sought to assuage public fears while also offering public health expertise in an administration frequently dismissive of science. Her elegant and colorful scarves prompted their own social media accounts and, more recently, praise from the president.

Unlike Fauci, who raised Trump's ire with frequent contradictions and by eclipsing him in public opinion polls - her relationship with the president was easy and warm. Two former administration officials who watched the two of them interact said she managed the president well, briefing him in terms he understood and often holding his interest longer than other aides.

But more than five months into the pandemic, Trump has grown exhausted by the dismal coronavirus news and just wants the issue to be behind him, the two former officials said, adding that he now associates Birx with the failures.

Administration officials said Birx has privately argued against Trump's push for the reopening of all schools, citing studies that show there could be outbreaks and problems.

In recent weeks, her time in the Oval Office has dropped, officials said, and she is not always part of decision-making meetings led by Trump son-in-law and senior adviser Jared Kushner and White House Chief of Staff Mark Meadows.

The White House declined to make Birx available for an interview Monday. White House spokesman Judd Deere said in a statement that Birx's "incredible leadership in the HIV/AIDS field and her honest, thoughtful approach as the White House Coronavirus Response Coordinator have helped to save millions of lives."

In a news conference Monday evening, Trump said that he has "a lot of respect" for Birx and that he thinks Pelosi has treated her "very, very badly."

Birx's reputation has been harmed, however, in the public health community where she has spent much of her life. The turning point, several experts said, was when she began effusively praising Trump in interviews.

"He's been so attentive to the scientific literature and the details and the data," Birx said in a Christian Broadcasting Network interview in late March, praising Trump's "ability to analyze and integrate data."

At the time, Trump was pushing the anti-malarial drug hydroxychloroquine, an unproven medical treatment for the coronavirus, and was arguing in favor of reopening the country by Easter despite surging cases across the country.

Another controversial moment came when Birx defended Georgia's reopening in April, which included tattoo parlors and hair salons, where people cannot keep enough distance from one another. Public health officials were dismayed at reports that Birx was questioning the Centers for Disease Control and Prevention's official coronavirus death count as too high, when nearly all experts believe it is too low.

Birx had engendered respect from the public health and scientific community for her decades of work on HIV/AIDS, and her time overseeing the President's Emergency Plan For AIDS Relief (PEPFAR), created by George W. Bush, was praised widely.

She was also beloved by many in the AIDS activist community, which includes researchers and has considerable influence.

Birx has served across multiple administrations and holds the title of global AIDS ambassador. But many AIDS activists have decided they will work to end her career in government if Biden defeats Trump in November, several activists said.

"What kind of nefarious spirit possessed the Debbie Birx that AIDS activists have loved and adored for years?" asked Peter Staley, a longtime HIV/AIDS activist. "Where did she go? We no longer recognize her, and it's too late for an exorcism."

Within the administration, several current and former senior officials described Birx as a politically shrewd power player who keeps close tabs on developments in the president's orbit. Her name was at one point floated for Health and Human Services Department secretary.

But some of these same officials also noted that Birx has made enemies within the White House, in part because a growing number of aides believe she takes different positions with different people and because of sharp attacks on some colleagues.

Her allies, meanwhile, argue that Birx - who served as a physician in the Army - respects the chain of command and is more of a team player than Fauci. They say Trump has generally favored her over others, praising her television appearances and charts.

One White House official argued that Birx is in a difficult situation generally, and also likely the recipient of sexism; this person noted that Birx - who sends around a morning email complete with slides outlining her latest models - provides much of the data upon which the rest of the largely male team relies.

Some experts also praised Birx's use of data to explain the state of the outbreak at various points and acknowledged that she has a difficult job balancing the demands of political leaders with public health considerations.

"It's not an easy job to be sharing a podium with political leaders who may say something you don't agree with," said Tom Inglesby, director of the Johns Hopkins Center for Health Security. "You have to make a choice - do you choose to correct what you just heard, choose a different moment to correct it in a different way? You can see the challenge that she and Dr. Fauci have with trying to clarify things that are said that they don't agree with."

Birx was at a vacation house in Delaware this weekend when White House officials specifically asked her to appear on the Sunday shows. She expected to face difficult questions but was stung by Trump's scathing tweet, in part because it could limit her ability to do her job, according to one person familiar with her reaction.

"If she doesn't have the president's support," said one ally, speaking on the condition of anonymity to share a candid assessment, "where does her power come from?"