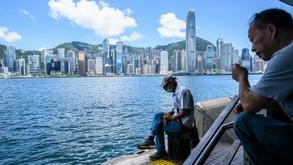 All of the 80 new infections were locally transmitted, and 24 of them were of unknown origin. The city's total number of infections stands at 3,589, with 37 related deaths.

Chuang Shuk-kwan from the city's Centre for Health Protection, however, said it is still too early to conclude that Hong Kong has passed the peak of the third-wave coronavirus outbreak from one day's numbers.

"A few more days of observations are still needed," she said during a daily news briefing, calling on residents not to let their guard down as 80 new infections in a day is still a high figure.

Anthony Wu Ting-yuk, chairman of BGI's genetic laboratory in Hong Kong, and several other laboratory technicians, are reported to have met with the mainland experts at Metropark Hotel Kowloon on Monday morning. BGI Group, Hybribio and KingMed Diagnostics are the three laboratories verified by the SAR government to conduct nucleic acid testing.

Yu Dewen, head of the group of mainland medical experts, said that it is tasked with assisting the Hong Kong SAR government in conducting large-scale nucleic acid tests.

With their professional assistance, Hong Kong's virus testing capacity could be massively scaled up in the month ahead, becoming able to conduct 100,000 to 200,000 tests a day or more, he said in an interview with Xinhua News Agency published on Monday.

Yu, who was also commander-in-chief of the Guangdong medical aid team that was sent to Wuhan in January, said the local testing capacity in Hong Kong cannot keep pace with the spread of the virus. Even with local private labs' assistance to beef up the testing capacity to 30,000 a day, this would be insufficient to meet the city's needs, Yu said.

"Hong Kong's battle with the coronavirus has reached a critical moment, given that large-scale community transmission is already taking place," Yu added. But he said he is confident that the mainland experts will be able to help the city combat the deadly disease. "Our team has gained valuable experience in Wuhan and Beijing," he added.