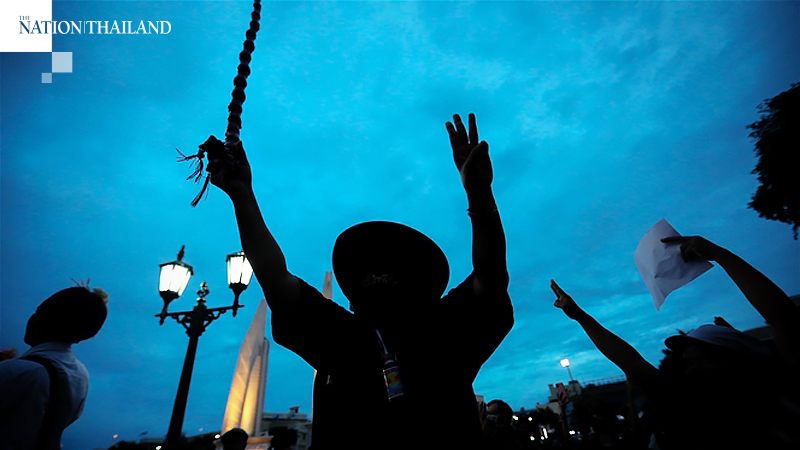 Pro-democracy protesters join a Harry Potter-themed gathering at Democracy Monument on Monday night. In what was viewed as a landmark gathering, protesters for the first time openly raised the issue of the monarchy's role.

In what was viewed as a landmark demonstration on Monday night, protesters for the first time raised the issue of the monarchy’s role – previously a taboo topic in Thailand.

Anti-government protesters gathered at Democracy Monument in Bangkok for a demonstration titled “Harry Potter versus You-Know-Who or He-Who-Must-Not-Be-Named”.

The rally held by students from Kasetsart University and Mahanakorn University of Technology kicked off at 5pm and ran into night.

Protesters warned that excessive royal power may undermine democracy in a constitutional monarchy, and called on the government to abandon or change relevant laws.

They also called for amendment of the lese-majeste law to bring it into line with democratic and human rights principles, including the right to free speech.

They urged the government listen to opposing views from students and other citizens, in order to solve the country’s problem via democratic means.

Dressed like characters from the JK Rowling-created series, the protesters said they chose the theme because Thailand’s political situation is similar to that of the Harry Potter tale in which the arch-villain, Lord Voldemort, and his followers silence those who oppose them.

Lawyer and political activist Anon Nampa, 34, delivered an almost unprecedented public speech on the role of the monarchy .

He called for an open debate about the monarchy’s role in order to avoid the risk of future violence between opposing political camps. “The issue has long been swept under the carpet, resulting in country problems being left unsolved,” he told hundreds of demonstrators.

He claimed the military-sponsored Constitution had offered His Majesty the King authority beyond that allowed by democratic principles. He said the 2014 military coup had led to law changes that were not consistent with the principle of constitutional monarchy. The post-coup military government led by Prime Minister Prayut Chan-o-cha issued new legislation allowing the King to manage the Crown’s property more freely, he added. Meanwhile the current Prayut government last year issued emergency decrees placing two military units under HM the King’s direct supervision, which risked returning the country to an absolute monarchy, he said. No other country under constitutional monarchy would allow the sovereign to supervise a large number of military personnel, he said.

He urged Parliament to debate the role of the monarchy and reports that the King spends much of his time in Germany.

Anon said critical debate on the monarchy’s role was not aimed at toppling the institution but at finding solutions for a legitimate constitutional monarchy.

Student-led protests emerged on July 18 as the Covid-19 outbreak subsided, and have now spread nationwide with almost daily flash mobs. Pro-democracy demonstrators are calling on the government to dissolve Parliament, stop intimidating activists and to rewrite the Constitution.

Prayut on Tuesday (August 4) pledged to listen to protester voices, but warned that police were investigating whether protesters had spoken about the monarchy out of context.