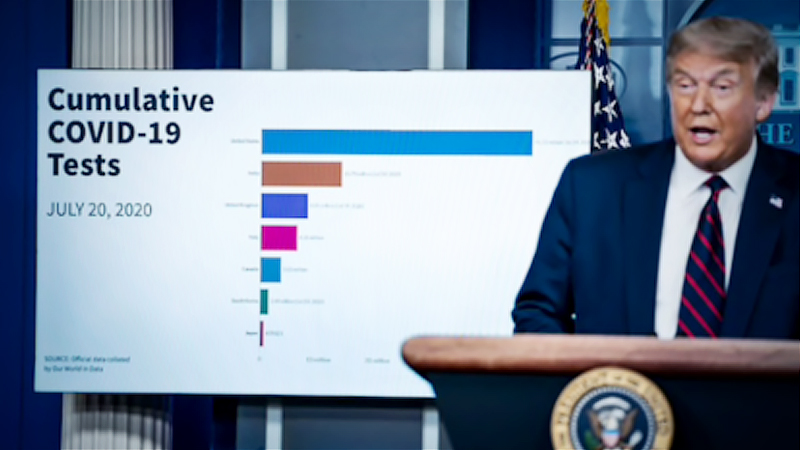 WASHINGTON - The Trump administration is sticking by its view that schools must reopen on time and in person as the United States approached 5 million confirmed coronavirus cases Tuesday and as Mississippi's conservative governor reversed course to delay school for many students and demand that all wear masks.

The U.N. chief warned that the world faces a "generational catastrophe" because of school closures, with more than a billion students at home. In a video message, he urged countries to suppress the virus sufficiently to allow schools to reopen, calling the coronavirus pandemic "the largest disruption of education ever."

A policy brief published alongside Guterres's message emphasized that suppressing transmission of the virus is "the single most significant step" leaders can take toward reopening schools.

White House press secretary Kayleigh McEnany was asked Tuesday about the experience of Israel, where some schools that opened have closed because of a virus surge. She replied by quoting Robert Redfield, director of the Centers for Disease Control and Prevention Director, who said last week that children need to return to school, but omitting his cautions about doing so safely.

Many large school districts have already announced a delay in on-campus learning, including those in New York, Los Angeles and in the District of Columbia area.

But schools are opening elsewhere, making the country a patchwork of open and closed as many students begin classes in one form or another this month. The United States leads the world in confirmed coronavirus cases, with more than 4.7 million, and has recorded more than 153,000 deaths. Tuesday marked the ninth consecutive day in which the country averaged more than 1,000 coronavirus-related fatalities following the recent peak in new cases.

Trump defended the U.S. death record, claiming it was among the world's lowest, and added that "relative to cases, also, we're at the bottom of the list."

Trump's demands that schools reopen while infection rates are increasing in most states have politicized reopening decisions being made at the local and state levels. Many district leaders, including in Republican-led states, have said they are starting the academic year virtually because it is too dangerous to reopen school buildings and risk the spread of the coronavirus.

Nearly a third of students in one suburban Atlanta school district were required to return to school for in-person learning over their families' objections because of a waiting list for the district's online learning alternative.

Classes resumed Monday for students in Paulding County, Ga., where masks and social distancing are encouraged but not required.

LaShanda Hambrick, a Paulding County parent who has children as well as nieces and nephews in the high school, called the waiting list "outrageous." Hambrick told WXIA Channel 11 that during an open house Friday, there were no social distancing or mask requirements at the school; when she and her sister tried to register their children for the online academy, no spots were left.

"They're telling me, as we're on the waiting list, we're highly encouraged to come to school," Hambrick said. "They told me that if my daughter wasn't there today, she would be withdrawn."

The school told the station that parents who were wait-listed missed the registration deadline.

Anger about the district's insufficient capacity for its online academy was compounded by recent news that football players at one of the district's high schools had tested positive for covid-19, the disease caused by the novel coronavirus. For now, there is no vaccine or fully proven, widely available treatment.

Families at North Paulding High School received a letter from the principal the night before school started informing them that an unspecified number of players had contracted the virus, WSB Channel 2 reported.

Mississippi Gov. Tate Reeves, a Republican, issued broad mask-wearing requirements and delayed the return to school for middle- and high-schoolers. In a reversal of Reeves's prior stance, all students and staff must wear masks.

Mississippi reported 572 new cases and 18 new deaths Monday, bringing the statewide total to more than 62,000 and 1,700, respectively, according to Washington Post data.

Corinth School District, the first to reopen in Mississippi, announced Monday that two additional positive cases have been recorded at Corinth High School since its doors opened last week. The school had reported a student with the virus in its first week of classes, the Mississippi Clarion-Ledger reported.

"The three individuals attended school early last week but have not been present at Corinth High School since Tuesday of last week," the district said in a statement, adding that the district has been communicating with the state's health department and the CDC to ensure a safe learning environment.

Medical experts in Mississippi, including LouAnn Heath Woodward, vice chancellor of the University of Mississippi Medical Center, had called for a statewide mask mandate and a delayed start to schools.

Maryland's governor and leaders of the state's largest jurisdiction have clashed this week over whether private schools should be able to bring students back on campus for in-person learning.

Three days after Montgomery County's top public health official said that private and parochial schools would have to stick to online teaching until at least Oct. 1, Gov. Larry Hogan sought to invalidate the county directive.

Hogan, a Republican, sharply rebuked Montgomery County for barring in-person instruction, saying local officials went too far in exercising the leeway he gave them to shut down businesses, schools and other activities amid the pandemic.

Meanwhile, Americans looking to purchase Clorox wipes may have to wait until next year until stores are fully restocked, according to the company's chief executive.

Demand for cleaning products and disinfectants has exploded since the pandemic began. And while Clorox officials had previously said consumers would find their cleaning supplies back on shelves this summer, the heightened demand continues to outpace the company's ability to produce more.

Many disinfectant wipes are made from a material called polyester spunlace, which is in short supply because it is used to make personal protective equipment, such as masks and medical gowns, Clorox chief executive Benno Dorer told Reuters. "We feel like it's probably going to take until 2021 before we're able to meet all the demand that we have," he said.

Americans eager to clean their homes and belongings to protect against infection have rushed to stock up on disinfecting wipes. The company this week reported a sales spike of 33 percent in its health and wellness business. When retailers do have the product to sell, they have limited the number of wipes containers customers can buy.

As of Tuesday, Walmart and Target's websites said Clorox wipes were sold out online, with limited selections for specific Zip codes.

Linda Rendle, who will take over as Clorox's chief executive in September, said the wipes won't be fully stocked until summer 2021, but that more wipes will become available each month, according to the Wall Street Journal.

"We must do better on supply to meet demand," she said. "We are not satisfied with our service levels."