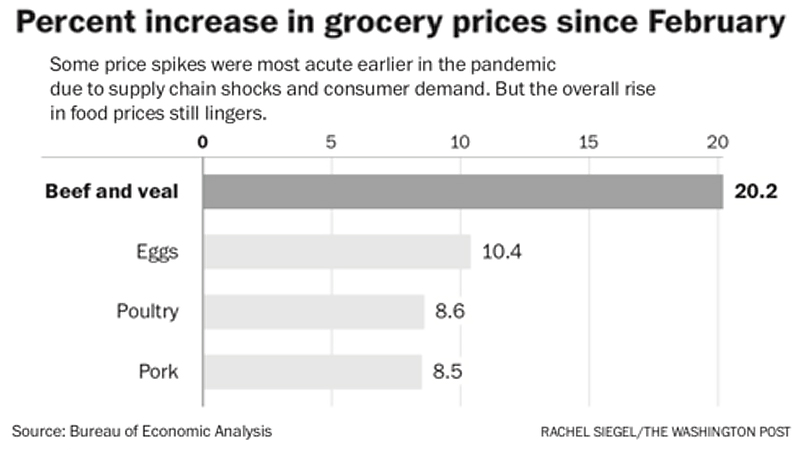 Some price spikes were most acute earlier in the pandemic due to supply chain shocks and consumer demand. But the overall rise in food prices still lingers.

The cost of groceries has been rising at the fastest pace in decades since the coronavirus pandemic seized the U.S. economy, leading to sticker shock for basic staples like beef and eggs and forcing struggling households to rethink how to put enough food on the table.

Long-standing supply chains for everyday grocery items have been upended as the pandemic sickened scores of workers, forced factory closures and punctured the carefully calibrated networks that brought food from farms to store shelves. Even while some of the sharpest price hikes have eased somewhat, the overall effects are being felt most acutely by the nearly 30 million Americans who saw their $600 enhanced unemployment benefit expire last Friday - exacerbating concerns that the recession's long tail could worsen food insecurity for years to come.

Earlier in the pandemic, the shock to the food system collided with staggering layoffs and an economy forced into lockdown. Cars filled parking lots to wait at drive-through pantries. From the beginning of March through the end of June, food banks across the country distributed more than 1.9 billion meals, according to Feeding America. In March alone, food banks gave out 20% more food than an average month.

Sean Valadez, 35, of the greater Los Angeles area, came home from Costco in mid-March with a $600 receipt, hoping his grocery haul would feed his family for up to 45 days after he lost work in the music and live entertainment industry. When he went back to the store 40 days later, Valadez was stunned by the rise in prices for ground beef, chicken, salmon and eggs. The grocery bill was an eye-popping $1,000, not including the alcohol he also purchased.

Valadez said he didn't remove anything from his cart "because it was shameful." He swiped his credit card, went home to his partner, and told her they would have to make a serious change. Their unemployment benefits just wouldn't cover such high grocery bills.

"I left the United States to be able to afford groceries," said Valadez, who brought his family to stay with his mother-in-law in Mexico, although he maintains his California home. "Food prices are what's keeping us here."

Overall inflation has not been a pressing concern since the recession touched down in February. Last week, Federal Reserve Chair Jerome Powell said consumer prices have been kept in check due to weak demand, especially in sectors like travel and hospitality that have been most affected by the pandemic. But food prices are the exception.

"For some goods, including food, supply constraints have led to notably higher prices, adding to the burden for those struggling with lost income," Powell noted.

Indeed, nearly every category of food become more expensive at some point since February, according to data released Friday by the Bureau of Economic Analysis. Beef and veal prices saw the steepest spike (20.2%), followed by eggs (10.4%), poultry (8.6%) and pork (8.5%).

Compared to this time last year, prices for beef and veal are up 25.1%. Eggs are up 12.1%, and pork is up 11.8% from a year earlier, according to seasonally adjusted BEA data.

For many staples, the price hikes were most severe earlier in the spring and summer when ruptured supply chains clashed with a surge in consumer demand. Some categories, like eggs, have seen prices fall back down as the supply strain wore off and shoppers stopped hoarding so much. Milk prices have actually dipped below pre-pandemic levels.

Regardless, the grocery system was strapped by a common theme: supply chains are hard-wired and can't quickly bend around a global pandemic. Plus, the labor, transportation and warehousing networks that keep restaurant or school kitchens stocked aren't the same networks that prop up supermarkets.

Take meat. In April and May, widespread covid outbreaks sickened thousands of workers at beef and pork processing plants. Factories were forced to scale back production or close altogether, straining the supply chain and triggering short-term shortages as shoppers rushed to stock up.

Stress-baking and hoarding caused a retail egg shortage early in the pandemic. But the egg supply chain was also thrown out of whack when there simply weren't enough cardboard or Styrofoam cartons to package eggs for retail sale, Lusk said. Eggs also tend to go to restaurants in powdered or liquid form, unlike the whole eggs sought out by grocery stores.

The milk supply chain was also pinched by basic packaging issues, Lusk said. Cafeterias and schools shut down, creating little need for small, paper milk cartons as hoards of consumers rushed to stock up by the gallon.

"The supply was not able to move to where the demand was, and that's a big part of why you saw prices getting pulled up," Lusk said.

While some of the supply chain shocks are getting better, overall food price increases still linger. For the nearly 30 million Americans who just lost $600 in enhanced weekly federal benefits, there can be less money than ever to cover the basics.

"Cutting back on food budgets is one of the first things people do," said Elaine Waxman, a senior fellow in the Income and Benefits Policy Center at the Urban Institute. "It's a strategy for trying to cope with an economic shock, or persistently limited resources."

More than one in six adults were food insecure in May, according to an analysis by the Urban Institute. That gap had moderated slightly since earlier in the pandemic, in part due to the $600 employment benefit, Waxman said.

One of the draft stimulus bills Congress is considering would not expand the Supplemental Nutrition Assistance Program (SNAP), also known as food stamps. It also would not extend the Pandemic EBT program, a debit-card benefit for households with children who have temporarily lost access to free or reduced-price school meals.

Food insecurity, Waxman said, casts a long shadow. After the Great Recession, rates of food insecurity remained at high levels for a decade. Estimates about when the economy might recover are hard to come by, since a turnaround depends largely on getting a public health crisis under control. But food insecurity will persistently drag behind, Waxman said.

"One of the things that's hard to explain to people is that poverty lags unemployment," Waxman said. "If we woke up tomorrow morning and things were dramatically better, I think we can expect food insecurity to be at elevated rates for a considerable period of time."

Over the past few weeks, as the $600 benefit was set to expire, the North Texas Food Bank saw an uptick in families served by its emergency pantry, said Valerie Hawthorne, director of government relations.

"We think those folks are preparing for what's coming," Hawthorne said.

Hawthorne said she was particularly concerned about the elderly, since many seniors are only eligible for the minimum amount in SNAP benefits - which can be as low as $16 a month. Looking ahead to the fall, Hawthorne said parents will have to weigh the cost of child care versus leaving their jobs to stay home and care for kids.

"It could potentially be a perfect storm," Hawthorne said. "You have to pay your rent or your mortgage. You have to make that car payment. But food can be negotiable."

In Orlando, Lindsay Reynolds, 27, was furloughed from her job with a major theme park company in mid-April. Relying on the $600 boost, Reynolds re-calibrated her budget to cover rent, utilities and a car payment, allotting no more than $75 a week for groceries. She sought out discounts at Publix, avoided more expensive organic products and tried to eat healthfully while living off chicken, pasta and rice. She'd sometimes treat herself to a cheap takeout meal once a week.

That was sustainable until her enhanced jobless benefits vanished, slicing her weekly payment to just $247 from the state of Florida after taxes.

Reynolds is eager to go back to work, but her company relies on tourism. Over the weekend, she moved back in with her parents - a privilege she knows isn't available to everyone trying to make ends meet.

"As I was crunching the numbers, everything started to implode, and I called my parents sobbing," Reynolds said. "They said, 'why don't you consider driving home for a little bit ... Come home so we can cover your food so you can use all of your employment money for all of your other bills.'"

As she was packing up to leave, Reynolds darted into a Publix to snag some Lysol wipes for her parents. The $6.50 price tag was hard to swallow. Reynolds figured it was the least she could do.