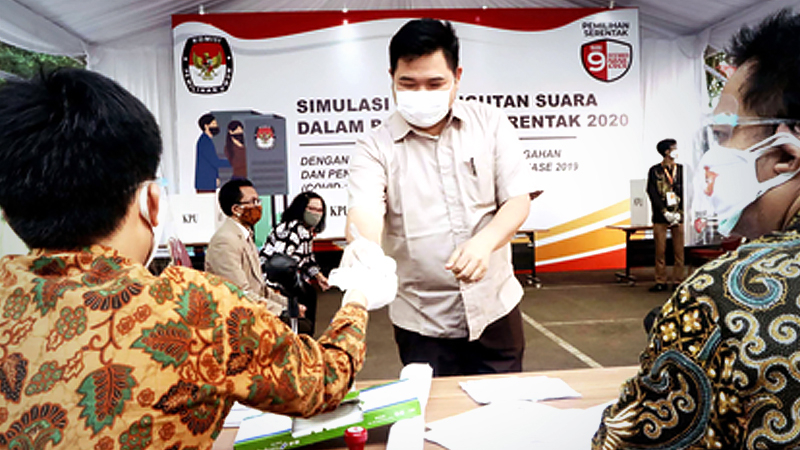 A member of a polling station working committee (KPPS) hands over plastic gloves to a voter during a simulation for the 2020 simultaneous regional elections in the grounds of the General Elections Commission (KPU) in Jakarta on July 22. (JP/Dhoni Setiawan)

Indonesia scored 74.92 points out of 100 in the 2019 democracy index, up by 2.53 points from the previous year, Statistics Indonesia (BPS) reported on Tuesday.

The latest Indonesian Democracy Index (IDI) score is the highest the country has ever recorded since BPS launched the evaluation program in 2009.

Despite the setbacks, Indonesia recorded better scores in freedom of religion at 83.03 points, freedom from discrimination at 92.35 points, and the role of regional Legislative Councils (DPRD) at 61.74 points.

"[The country] needs to improve on these six indicators since it scored lower than 60 points," Kecuk said in a press conference on Monday as reported by tempo.co.

He went on to say that Indonesia recorded a poor score in the threat of violence hampering freedom of expression at 57.35 points, the percentage of women councilors at 58.63 points, and violent demonstrations at 30.37 points.

The remaining three indicators with poor scores are regional bylaws (Perda) initiated by the DPRD at 46.16 points, DPRD recommendations to executive bodies at 16.70 points and information on regional budgets (APBD) at 53.43 points.