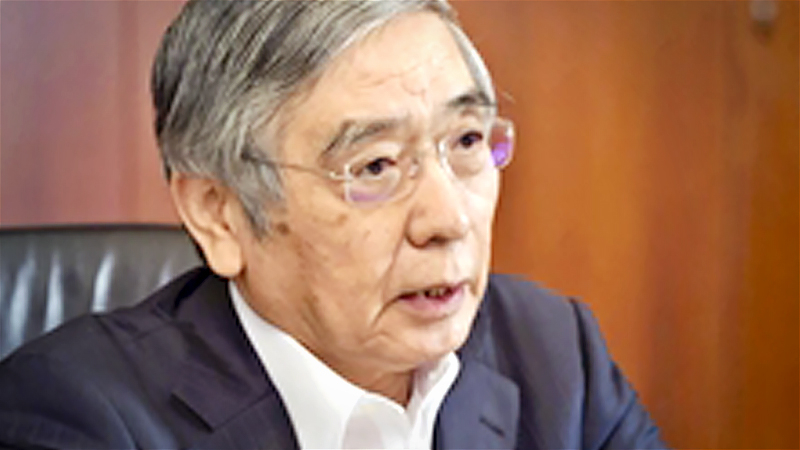 Bank of Japan Gov. Haruhiko Kuroda speaks to The Yomiuri Shimbun on Monday.

Bank of Japan Gov. Haruhiko Kuroda said the central bank could extend its support for companies’ cash flow management “if deemed necessary,” hinting that the BOJ may extend the original deadline of March 2021 for this aid, launched in response to the surge in infections of the novel coronavirus.

The Japanese economy is feared to face downward risks, Kuroda said in an exclusive interview with The Yomiuri Shimbun on Monday. He stressed that the bank would continue to respond flexibly.

The BOJ has devised a series of countermeasures since March, when infections began to spread. To support corporate financing, the bank expanded its target buying of corporate bonds and commercial paper issued mainly by large companies to about ¥20 trillion. It provides interest-free loans to financial institutions that extend loans to companies under an interest-free, collateral-free system.

Kuroda stressed that these measures “have had a certain effect.”

Regarding the country’s economy, Kuroda said, “Despite being still a low level, it is certainly moving gradually toward recovery.”

He also said: “The number of people infected with the virus has been increasing outside Tokyo, too. There is a deep sense of uncertainty, and it’s true that downside risks are greater [than upside factors].”

If the economy deteriorates further, the BOJ will take additional monetary easing steps.

Kuroda said this could involve the BOJ expanding its financial support measures, lowering long-term and short-term interest rates, and increasing purchases of ETFs.

“It’s highly likely that new measures will be needed,” he said, adding that the bank will be flexible in coming up with steps.

Thanks to support from the government and the BOJ, companies’ funding conditions have not deteriorated to the extent they did after the collapse of U.S. investment bank Lehman Brothers in 2008. But if the impact of the virus is prolonged, Kuroda banks’ loan-loss provision would increase, having an adverse effect on financial conditions.