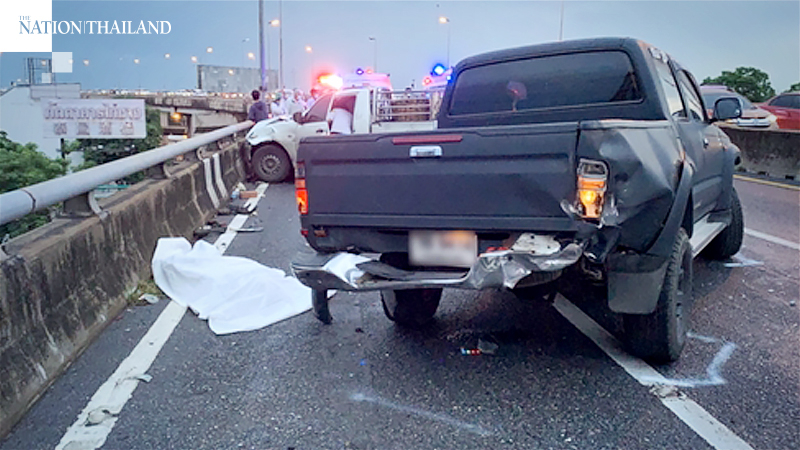 A policeman and Thai musical folk drama actor Sarawut Phongsawat, 34, were killed in an accident before dawn today (August 5) – just as they tied to help a man whose car broke down on the road.

The incident took place on the parallel elevated highway in Bangkok Noi district.

The girlfriend of Sarawut, a popular musical folk drama actor who starred as a villain in a play, said Sarawut stopped his car on the elevated highway and went over to help the driver of a black Toyota that had broken down and was parked on the side.

While waiting in the car as Sarawut and a police officer examined the Toyota, she suddenly saw a white car plough into the broken down car. She immediately tried to call her boyfriend.

When he did not respond, she got out of the car to see what happened and to her horror noticed the unmoving form of Sarawut on the ground below the elevated highway.

The police officer, identified as Narong Ninsuwan, was also killed in the crash.

The driver of the white car claimed he could not see the road ahead clearly in the dark because of “low light”, leading to the accident.

However, he was taken for an alcohol test and sent to Khukhanan Loy Fa Police Station for further interrogation.