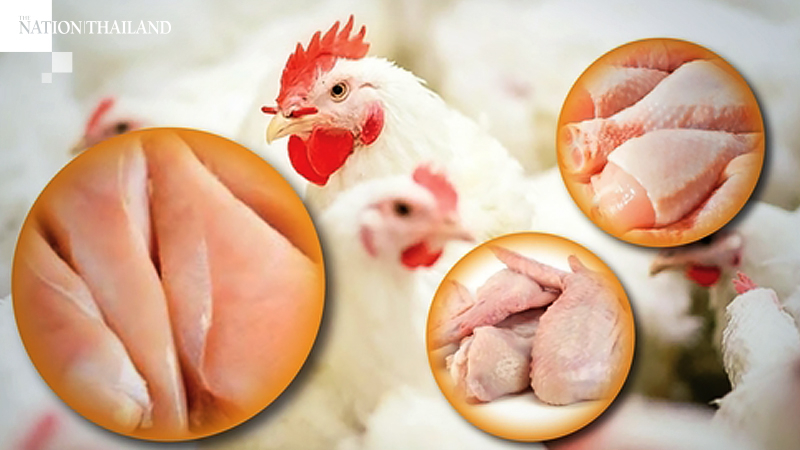 Thai chicken exports rose less than expected in the first half of this year, due to the Covid-19 fallout, the Thai Broiler Processing Exporters Association said.

Thailand exported 470,000 tonnes of chicken in the first six months, up 2 per cent year on year, with export value of Bt54 billion, up Bt1 billion.

"Chicken exports to the EU dropped by 10 per cent as the Covid-19 situation there is not yet resolved. We expect Thailand to export 280,000 tonnes of chicken to the EU this year, down from 330,000 tonnes last year," he said.

Meanwhile, chicken exports to Japan only rose by 2 per cent because the virus outbreak had hit tourism and forced the country to postpone the Tokyo Olympic Games, reducing demand.

However, he said exports to China and Singapore had increased by 100,000 tonnes and 20,000 tonnes respectively in the first six months.

"Although demand for chicken in China increased, Thailand cannot increase production because China is ordering only chicken wings and feet," he said. "Currently, chicken breast cannot be exported to the EU, causing a decline in price."

"If the EU contains the spread of Covid-19 and a vaccine is becomes available, the chicken export situation will get brighter," he said. "Currently, we are trying to find markets in neighbouring countries who may be seeking more chicken as the pork price is high."

He added that most Thai chicken businesses have cut production in line with falling demand.

However, "production costs have not increased much as the price of corn and soybean remain stable", he added.