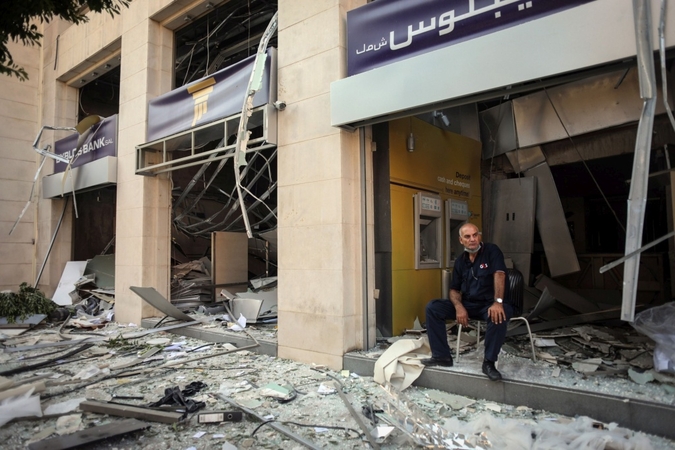 A private security guard sits at the entrance of a destroyed bank branch in Beirut, Lebanon, on Aug. 5. MUST CREDIT: Bloomberg photo by Hasan Shaaban. Location: BeirutLebanon

Even before the explosion ripped through his butcher's shop on one of Beirut's most fashionable streets, Tony Iyami was just about staying afloat.

A lockdown to control the coronavirus pandemic had hit business, compounding a banking crisis that's left most Lebanese unable to access their savings or borrow. The government is bankrupt, in talks with the International Monetary Fund for a bailout and barely functioning. Then came Tuesday's cataclysmic blast that erupted out of the capital's port area shattering all before it, killing at least 100 people and wounding thousands.

"We were already hobbling along, surviving step by step, but now we've been struck down," Iyami said in between securing his property and sweeping up debris. "If our officials don't wake up, we're already being destroyed, but if they don't wake up to what's happening now, this nation is finished."

The explosion, fueled by a vast consignment of ammonium nitrate stored at the port despite repeated safety warnings, couldn't have come at a worse time for Lebanon, which is enduring its deepest political and financial crisis since the 15-year civil war ended in 1990. As fighting ebbed, former warlords became the nation's rulers, borrowed up to the hilt and then pillaged state coffers for three decades until there was virtually nothing left. The result is often a state in name only.

Daily blackouts last hours, while garbage is left uncollected on the streets. A collapse in the currency has pushed inflation above 50%, erasing life savings. The blast has put the country's leading port out of action and destroyed the main grain silos, ensuring prices will soar higher as supply chains are disrupted. Weeks of protest that began in October against cronyism and corruption, have fizzled into hopelessness as more Lebanese look to follow previous generations and emigrate.

Lebanon has appealed for international help as concerns mount over shortages in a nation that depends heavily on imports. France, Germany and others have offered medical aid and assistance with rescue operations. But decades of corruption and failure to prove that Lebanon's political class is serious about reform means donors remain reluctant to provide the government with budget support. Any aid is likely to be humanitarian or targeted at specific sectors like health.

Unable to generate foreign significant support, oversee an economic recovery or guarantee public safety, Prime Minister Hassan Diab's administration, cobbled together in January after mass protests brought down the previous government, may not last. Though Lebanon's problems are an accumulation of nepotistic policies and public mismanagement over the decades, he's facing criticism for doing too little to manage the country's multiple crises.

"Large elements of the public no longer believes the government is able to manage," Ayham Kamel, head of Middle East and North Africa research at Eurasia Group, said in a note. "The economic crisis will also deepen as the port is the main trade valve and base for many stored goods awaiting clearance."

Talks with the IMF had stalled as it became clear that politicians and bankers could not agree even on the magnitude of financial losses let alone who should pay for them. The government has lost key advisers and officials and the foreign minister resigned this week, frustrated that political elites were too busy protecting their own interests to take the steps demanded by potential lenders to save the economy from ruin.

The areas behind the Port of Beirut were some of the trendiest in a politically turbulent city infamous for its nightlife. Packed with bars, restaurants and boutiques as well as residential apartment buildings, Gemmayze, Mar Mikhail and Saifi once throbbed with a mix of fashionable revelers and longtime residents. Beyond the port itself, where the 2,750 tons of hazardous ammonium nitrate stored in a warehouse exploded on Tuesday, these old quarters were among the worst hit.

Dazed employees picked up broken sheets of metal and glass on Wednesday as volunteers armed with brooms descended on the neighborhood to help with the cleanup. Lebanese Food Bank volunteers handed out water and sandwiches while ambulances sped along streets to pick up wounded people still trapped.

"We've already been closed for four months by the government because of coronavirus. All they do is fine us. The state doesn't care. I don't think they can help us. I don't think anyone will help," said Saeed, who owns a bar in Gemmayze that had its windows and doors blown in and kitchen and bar equipment damaged.

The blame game has begun. Diab, whose government was appointed in the aftermath of protests demanding the removal of a political elite that had taken Lebanon to the brink, has promised to investigate who was responsible for leaving the deadly chemical pile in storage for six years despite the danger. Critics have demanded an international inquiry into a tragedy they say will otherwise be hushed up.

Some port officials have been placed under house arrest pending investigations but the government has yet to say what, if anything, it will do to compensate home and businessowners. That's left some some facing ruin.

Abbas Mattar works in a luxury kitchen showroom near the port that once kitted out high-end homes across Lebanon. Already laid low by the financial crisis, it faces a repair bill running into millions of dollars that may not be fully covered by insurance.

"You despair in the end," he said. "From 1990 to today, all the ministers and MPs need to be killed because you can't get any dirtier than this. There are people who steal and leave but not to this extent. People are dead and you're continuing? Still clinging to your chair, to power?"