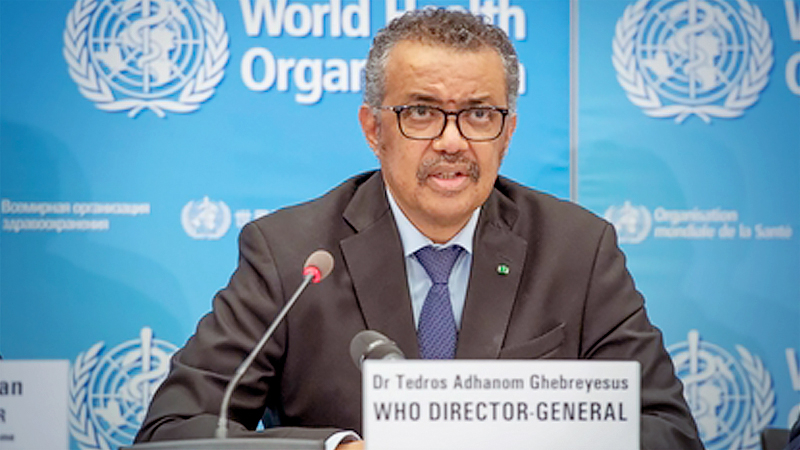 Making a novel coronavirus vaccine a global public product will help the world recover faster and suffer less, the head of the World Health Organization (WHO) said Thursday.

"There should be a global consensus to make a vaccine, any product, a global public product. And this is a political choice, a political commitment," WHO Director General Tedros Adhanom Ghebreyesus said at a virtual Aspen Security Forum via teleconference from the organization's headquarters in Geneva.

Tedros said the invisible virus has taken the world hostage. When the organization declared COVID-19 a public health emergency of international concern on Jan 30, "there were fewer than 100 cases and no deaths outside of China", but now the world has 18.5 million confirmed cases and more than 700,000 deaths.

WHO launched its Access to COVID-19 Tools Accelerator initiative at the end of April to speed up development of vaccines and therapeutics and to ensure fair distribution so that people with financial problems get access to the doses, according to Tedros.

Six vaccine candidates, including three from China, are in the third phase of clinical trials, meaning they are vaccines being put into the general population into otherwise healthy individuals to see if the vaccines will protect them against natural infection, according to Mike Ryan, executive director of WHO's Health Emergencies Programme.

"We want political leaders to decide on this: vaccine nationalism is not good. It will not help us," Tedros said in an online panel discussion with members of the Aspen Security Forum, normally held in Colorado, moderated by the NBC network.

Chinese Ambassador to the US Cui Tiankai, speaking at the same virtual forum two days before, also called for the international community to cooperate and develop as soon as possible effective vaccines, which should be shared by the entire world.

"That's why President Xi Jinping declared at a special conference of the WHO that if China could develop this vaccine first, we'll make it a global public good," Cui said.

Tedros noted that because it's a globalized world with economies intertwined, part of the world or a few countries can't be a safe haven and recover. They should recover together with the rest of the world, he added.

"So what we are saying is, sharing vaccines or sharing other tools actually helps the global world to recover together, and the economic recovery can be faster, and the damage from COVID-19 could be less," he said.

Despite the progress in vaccines and the hope being pinned on them, governments, communities and all citizens should still do what is expected of them, which includes physical distancing, hand hygiene and wearing a mask, Tedros said.

Asked to elaborate on his Monday warning that there might never be a "silver bullet" for the coronavirus, Tedros said his message was to keep the balance by using the tools available to the maximum to save lives, while investing in vaccines.

Tedros also said he hoped the US would reconsider its position of retreating from the WHO. One month ago, the Trump administration sent formal notification of US withdrawal from the organization, effective next year.

The WHO chief said the US leadership and supporting global health has saved many lives, and when the US decided to withdraw, the problem is not about the money but rather the relationship with the US, which is more important, and its leadership role.

"We hope the US will reconsider its position. If there are issues about WHO, the UN system at large, we're very open for any evaluation or assessment," Tedros said.

Speaking before the panel discussion, Nicholas Burns, a Harvard professor and executive director of the Aspen Strategy Group, said it was a "great mistake" for the US to announce its departure from the WHO and then to withdraw its funding.

"A lot of Americans agree with me that during a great global pandemic, we should be pitching in and helping the rest of the world, not taking our funds and leaving," Burns said.

"I also hope, and I think a lot of people hope that the World Health Organization can reform itself, can account for its deficiencies, but most of all I wanted to say because we are all in the middle of a global pandemic … we thank you for what you're doing," he said.

"The big thing is that if the virus is circulating in the communities, those schools are part of that community and that means that the virus can enter the school as well," she said.