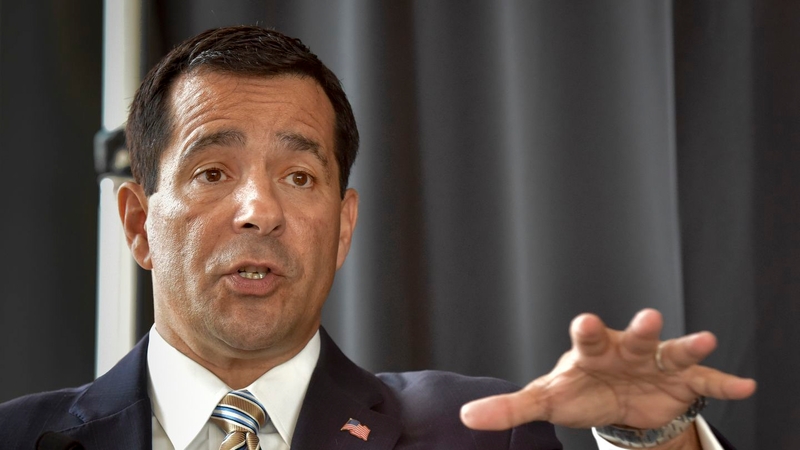 William Evanina, Director of the National Counterintelligence and Security Center, says that China wants President Donald Trump to lose in November and that Russia is denigrating Joe Biden. MUST CREDIT: Washington Post photo by Bill O'Leary

WASHINGTON - Russia is "using a range of measures" to interfere in the 2020 election and has enlisted a pro-Russian lawmaker from Ukraine - who has met with President Donald Trump's personal lawyer - "to undermine former vice president [Joe] Biden's candidacy and the Democratic Party," a top U.S. intelligence official said in a statement Friday.

The remarks by William Evanina, director of the National Counterintelligence and Security Center, were some of the most detailed to date about foreign interference in the presidential race and come after earlier criticism from Democratic lawmakers that he had not shared with the public some of the alarming intelligence he gave them in classified briefings.

Evanina also said that the government of China does not want Trump to win reelection in November, seeing the incumbent as "unpredictable." Evanina described China's efforts to date as largely rhetorical and aimed at shaping policy and criticizing the Trump administration for actions Beijing sees as harmful to its long-term strategic interests.

By contrast, Evanina described Russia as actively engaged in efforts that are reminiscent of the Kremlin's attempts to influence the outcome of the 2016 election.

"We assess that Russia is using a range of measures to primarily denigrate former vice president Biden and what it sees as an anti-Russia 'establishment,' " Evanina said.

He noted that a Ukrainian lawmaker who has been in contact with Rudy Giuliani, Trump's personal lawyer, is part of a Russian disinformation effort.

Derkach met in December with Giuliani as part of an effort by Trump's allies to obtain damaging information about Biden in Ukraine, The Washington Post has reported. Giuliani also hosted Derkach on his podcast in February and has said the two have spoken repeatedly about Ukraine and Biden, terming the Ukrainian lawmaker "very helpful."

Giuliani has said that he was aware there were recordings of Biden speaking to Ukrainians and that he sought to obtain them in 2019, while he was working to locate information helpful to Trump. "We would have loved to get the recordings, but we never did," Giuliani previously told The Post.

Giuliani has noted that Derkach gave him other information that Giuliani thought could connect Biden to "corruption in Ukraine." Giuliani did not respond to a request for comment Friday.

Russia's current efforts against Biden can be traced back to his time in the White House, Evanina said, noting that the desire to wound his candidacy was "consistent with Moscow's public criticism of him when he was Vice President for his role in the Obama administration's policies on Ukraine and its support for the anti-Putin opposition inside Russia."

In addition to the disinformation campaign by Derkach, Evanina said, "Some Kremlin-linked actors are also seeking to boost President Trump's candidacy on social media and Russian television."

Some U.S. officials criticized Evanina for appearing to equate the efforts of China and Russia when the Kremlin was interfering much more directly. In his statement, China is listed first, followed by Russia and then Iran, which he described as motivated to interfere in the election but not yet taking any actions.

"Between China and Russia, only one of those two is trying to actively influence the outcome of the 2020 election, full stop," said a senior U.S. official, who, like others, spoke on the condition of anonymity to discuss sensitive information.

Another U.S. official said China sees the United States as an adversary but takes a longer-term approach that, so far, doesn't include the kinds of short-term efforts Russia is using to damage Biden.

Evanina also portrayed China as taking a longer view of its relationship with the United States but angered by recent Trump administration actions that have elevated tensions to historic levels, including the president's decision to ban the popular social media app TikTok and efforts to counter China's presence in the global market for 5G data networks.

"Although China will continue to weigh the risks and benefits of aggressive action, its public rhetoric over the past few months has grown increasingly critical of the current Administration's covid-19 response, closure of China's Houston Consulate, and actions on other issues," Evanina said.

The Trump and Biden campaigns embraced Evanina's statement as a vindication of their own positions and an indictment of the other's misdeeds.

"Donald Trump has publicly and repeatedly invited, emboldened, and even tried to coerce foreign interference in American elections," Tony Blinken, a senior Biden campaign adviser, said in a statement. "Joe Biden, on the other hand, has led the fight against foreign interference for years, and has refused to accept any foreign materials intended to help him in this election - something that Donald Trump and his campaign have repeatedly failed to do."

The top Republican and Democratic members of the Senate Intelligence Committee refrained from criticizing Evanina on that score. In a generally complimentary statement, Sens. Marco Rubio, R-Fla., and MarkWarner, D-Va., said Evanina had highlighted "some of the serious and ongoing threats to our election from China, Russia, and Iran. Everyone - from the voting public, local officials, and members of Congress - needs to be aware of these threats."

An official with the Office of the Director of National Intelligence said that the public should read Evanina's statement as "the most current, accurate and objective election threat information the intelligence community has to offer the public at this time."

"There is no particular rank or order by which the threat actors are listed in the statement. Each of these adversaries poses a threat to our election and it's imperative that we all work together as a nation to combat them," the official said.

Evanina privately gave Republican Party officials a briefing earlier this summer in which he also said that China did not want Trump to be reelected, that Russia preferred Trump, and that Iran wanted to interfere in the election, according to a person with knowledge of the briefing.

The statement also indicated there may be other countries besides the three named that are seeking to influence the election.

"Interference is illegal, influence is not," said one former senior official. "Basically it's lobbying."

Some intelligence veterans said the statement appeared designed, in part, to satisfy both campaigns.

"At the CIA, we called this 'dancing through the raindrops,' " said Marc Polymeropoulos, a former agency officer who oversaw operations in Europe and Russia.

The former senior official suggested Evanina worded the statement so as to not incur the wrath of the White House while "sticking to analytical language."

Evanina's quandary, the official said, is "how do you get the truth out there in a way that doesn't get you fired."