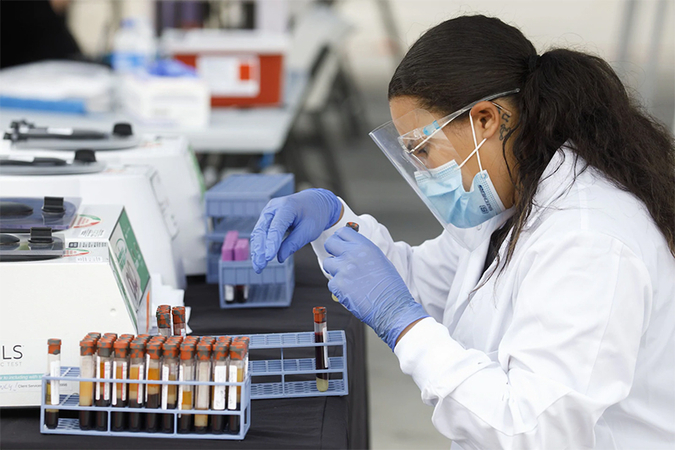 Hispanic children are approximately eight times more likely and Black children five times more likely to be hospitalized with covid-19 than their White peers, according to a study released Friday by the Centers for Disease Control and Prevention.

The report - which used hospitalization data collected in 14 states including California, Georgia, New York and Ohio from March 1 through July 25 - acknowledged that most pediatric cases of covid-19, the disease caused by the novel coronavirus, are asymptomatic or mild and that hospitalization rates among children remain relatively low. But like covid-19 in adults, Black and Hispanic children are far more likely to experience symptoms warranting hospitalization.

The report calls for improved understanding of the broader social forces that affect health so that racial and ethnic disparities in pediatric hospitalization rates can be mitigated.

It arrives as schools are beginning to reopen amid fraught political and scientific debates about the wisdom of doing so. President Donald Trump has pushed for fully reopening classrooms, arguing that children's immune systems are strong and that they will recover quickly from the virus if infected. Some epidemiologists urge caution, warning that not enough is known about how children transmit the virus to understand the risk in-person learning might pose to children, staff and families.

Children should wash their hands often and engage in social distancing, and those age 2 and older should wear a mask when with people outside of their families, the CDC report said.

About 1 in 3 hospitalized children wound up in intensive care units - roughly the same rate as hospitalized adults. But only 5.8 percent of 526 children studied required a ventilator. One patient in the study died while hospitalized.

Of 526 children for whom race information was reported, 46 percent were Hispanic and nearly 30 percent were Black. The census reports that 18 percent of people in the United States identify as Hispanic and about 13 percent as Black.

The CDC report said it is crucial to continue monitoring covid-19 hospitalizations among children.

Similar disparities were identified in a second CDC report Friday that examined a rare multi-system inflammatory syndrome in children - known as MIS-C - that affected 570 American children from April to late July.

In April, the United Kingdom issued an alert that children were arriving at hospitals there with symptoms that mirrored those of Kawasaki disease, a treatable condition that causes fever, rashes and vascular inflammation and normally affects children under age 5. By mid-May, with cases emerging in New York City and elsewhere on the East Coast, the CDC issued a warning about the syndrome and asked doctors to report cases meeting the definition of the condition in patients under 18.

The most common symptoms were abdominal pain, vomiting, rash and diarrhea. Many of those diagnosed with the syndrome experienced severe complications including cardiac dysfunction (40.6 percent), shock (35.4 percent), coronary artery dilatation or aneurysm (18.6 percent) and acute kidney injury (18.4 percent). Most patients diagnosed with the condition were admitted to intensive care units with a median stay of five days. Ten patients died.

Data about MIS-C cases were previously available only on a hospital-by-hospital or region-by-region basis. The CDC's report revealed that MIS-C occurred in a disproportionate number of Hispanic children. About 40 percent of the 570 cases occurred in children identified as Hispanic, while 33 percent of the children affected were Black.

"Long-standing inequities in the social determinants of health, such as housing, economic instability, insurance status, and work circumstances of patients and their family members have systematically placed social, racial, and ethnic minority populations at higher risk for COVID-19 and more severe illness, possibly including MIS-C," the study concluded.

The study showed that while MIS-C can result in dire outcomes, it remains rare: Among pediatric covid-19 patients, MISC-C was found in roughly 0.2 percent of cases.

According to the study, all 570 children in the report tested positive for acute covid-19 or for its antibodies, or had an epidemiological reason to believe they were exposed to the virus before symptoms appeared. They were all presumed to have been exposed two to four weeks before experiencing MIS-C, a pattern epidemiologists, pediatricians and virologists say may suggest MIS-C is triggered by a child's immune response to the virus.