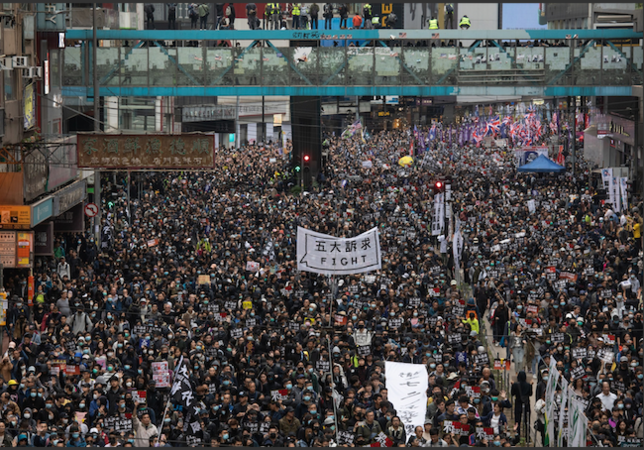 Relations between Washington and Beijing are rapidly deteriorating, and Hong Kong has found itself at the center of the fight.

In the latest development, the Treasury Department on Friday imposed sanctions on 11 Hong Kong officials, including Chief Executive Carrie Lam, for restricting freedoms and undermining the territory's autonomy as part of Beijing's ongoing crackdowns against pro-democracy protests and other dissent.

The U.S. sanctions highlighted Lam's support for Beijing's new national security legislation that makes easier for China to jail and censor its critics in Hong Kong. Lam is "directly responsible for implementing Beijing's policies of suppression of freedom and Democratic processes," the department said.

Why did the U.S. impose new sanctions?

Since Hong Kong's transfer from British control in 1997, Hong Kong has maintained semiautonomous rule from China in a model known as "one country, two systems." That has in part enabled Hong Kong to flourish as a global financial hub. In recent years, however, pro-democracy activists have accused China of encroaching on their freedoms and undermining the city's autonomy. Lam's government, which is backed by Beijing, has waged violent crackdowns in response to waves of pro-democracy protests.

Tensions further escalated in late June, when China imposed a restrictive new national security law. That prompted the Trump administration to end Hong Kong's "preferential treatment" - a special status that had allowed the city economic benefits, such as exemptions from U.S. tariffs on China. Washington also responded with measures sucha as visa bans on Chinese officials tied to the crackdown in Hong Kong.

The sanctions announced Friday allow U.S. officials to seize any property the designated officials may have in the United States and prohibits them from doing business in the country. The Washington Post's Shibani Mahtani wrote: The sanctions "also mark a clear shift in the way the semiautonomous territory's leadership is viewed by Washington - as entirely subservient to Beijing and its intentions for the city." Among the other officials sanctioned are Hong Kong's current and former police commissioners.

What has been the reaction so far?

Chinese and Hong Kong officials immediately condemned and sought to minimize the sanctions. Hong Kong's government on Saturday called it "blatant and barbaric interference in the internal affairs of the People's Republic of China, using Hong Kong as a pawn," the BBC reported. It also said the sanctions had no legal standing in Hong Kong.

Beijing's top representative office in Hong Kong called the sanctions "clowning actions" and warned that China would not be intimidated, Reuters reported. Lam posted sarcastically on Facebook on Saturday, mocking the U.S. action and writing that she did not want to visit the United States anyway. (Lam has previously said that she does not have assets in the United States.)

Hong Kong's pro-democracy activists praised the move. They had previously called for U.S. sanctions against the city's leadership.

On Thursday, President Donald Trump issued two executive orders against China-based TikTok and messaging app WeChat on what he said were national security grounds. That same day, he echoed previous criticisms of China' handling of the novel coronavirus as Secretary of Health Alex Azar prepared to visit Taiwan, another territory China disputes control over.

How could this affect international business?

On Saturday, financial regulators in Hong Kong sought to dispel market fears and worries that the sanctions would affect the daily operations of financial firms in the city, Reuters reported.

A spokesperson for Hong Kong's Securities and Futures Commission told Reuters that it "is not aware of any aspect of the (law) or the U.S. sanctions . . . that would affect the way in which firms carry on their normal operations in Hong Kong."

Facebook told The New York Times on Saturday that it had "taken steps to prevent the use of payments services" for the 11 sanctioned officials, which would mean they would not be able to buy advertising on the social media platform or related apps.

Credit card companies based in the United States could also be affected. A spokesperson for Mastercard told The Post that the company will "continue to review" the United States' latest action "to understand the impact it may have on any financial institution licensed to access our network." (Visa did not immediately reply to a request whether it is obliged to comply and prevent the newly designated officials from using its payment services.)

How have other countries responded?

The United States is not alone in clashing with China over its handling of Hong Kong. In response to the new national security law, Canada, Britain, New Zealand, Germany and Australia have suspended their extradition treaties with Hong Kong. (France halted ratifying its treaty.) China has responded in kind.