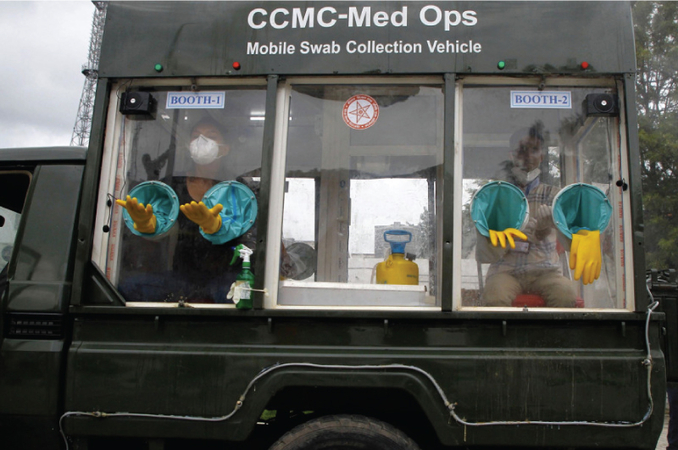 On Friday morning, a man reached Sukraraj Tropical and Infectious Disease Hospital. He wanted to inquire about the ambulance service. Not aware of who actually he was supposed to talk to, he had an altercation with the security guards. His gripe was that no one had sent an ambulance to pick him up.

Health workers at the hospital had taken his swab sample on Wednesday for a polymerase chain reaction test. The same evening officials at the Epidemiology and Disease Control Division called him to inform him that he had tested positive for the coronavirus and that an ambulance would be sent to pick him up to take him to hospital.

“After waiting for two days at home for an ambulance, the man came to hospital on Friday,” a paramedic serving at the hospital emergency told the Post. “What is worrying is he used two public buses to reach the hospital.”

The man, in his early 30s, was finally admitted to the hospital.

“But we don’t know how many people he met on his way home on Wednesday and while coming to the hospital on Friday,” said the paramedic who spoke only on condition of anonymity.

With Valley hospitals already filled with infected people, authorities are asking people testing positive to stay home. But not everyone does, according to the paramedic.

An official at the Epidemiology and Disease Control Division said that some officials, unaware of the fact that hospitals have been overwhelmed with a lack of beds and isolation facilities, could have told the person that he would be picked up by an ambulance.

The way the situation has been unfolding, soon the authorities will be unable to control the virus spread, public health experts say.

“Worst is yet to be seen, as the infection has spread rapidly,” said Dr GD Thakur, former director of the Epidemiology and Disease Control Division. “Number of cases will go up alarmingly in the coming days.”

Officials at the Health Ministry say that coronavirus cases have been reported from most of the places in Kathmandu Valley, buttressing public health experts' argument that sealing of certain areas will hardly mean anything when it comes to containing the virus.

The situation has changed alarmingly since Minister for Health and Population Bhanubhakta Dhakal on July 27 said that the government was looking for Covid-19 patients with a torch light to bring them to hospital.

Public health experts say the situation, however, is contrary to what the health minister is saying.

“The reality is people infected with the coronavirus are now looking for the government with a torch light,” Thakur told the Post.

In Kathmandu Valley alone, the number of cases has risen to 1,042, with more than 62 infections reported on Saturday, according to the Health Ministry. The total number of positive cases detected across the country on Saturday was 378. Seventy-three people, six in Kathmandu Valley, have died of Covid-related conditions so far.

Since the lockdown was lifted on July 21, 660 persons have tested positive for the coronavirus in Kathmandu Valley. The figure across the country is 4,598, as the nationwide Covid-19 tally reaches 22,592.

The government is trying to increase the number of isolation beds in the Valley and it is also planning to convert quarantine centres at Kirtipur and Bhaktapur into isolation facilities, according to Dr Sameer Kumar Adhikari, joint spokesperson for the Health Ministry.

According to Adhikari, only 15 to 20 percent Covid-19 patients, who will be seriously ill, need to be taken to hospital for treatment.

Public health experts blame the high public mobility for the rampant spread of the infection in Kathmandu Valley, especially after the lockdown was lifted.

“People are not following safety rules in the Valley despite the fact that the infection rate is increasing,” said Dr Sher Bahadur Pun, chief of the Clinical Research Unit at the Sukraraj Tropical and Infectious Disease Hospital. “People are coming out without wearing face masks, meeting people without maintaining social distance, sharing cigarettes and even having panipuri and chatpate on the roadside.”

Already on the backfoot, the authorities have introduced new measures to contain the spread of the coronavirus. Starting Thursday, odd-even vehicle rule has been enforced in Kathmandu Valley and other districts that have reported more than 200 active cases.

The government has also banned public and vehicular movements from 9pm to 5am and barred social gatherings–parties, seminars, feasts and public programmes–at hotels and restaurants.

On Friday, the Kathmandu District Administration Office decided to seal some commercial hubs of the Capital, citing high numbers of infections in those areas. The district administration offices of Kathmandu, Lalitpur and Bhaktapur also said that they will be providing only essential services for 15 days starting Sunday to reduce crowds.

Multiple officials at the Health Ministry the Post spoke with said that the Capital is on the verge of a massive outbreak, as the spread of the infection is so high that it is becoming uncontrollable.

“It has been taken as a pandemic of the government,” said Adhikari of the Health Ministry. “People should also be responsible and take precautionary measures.”