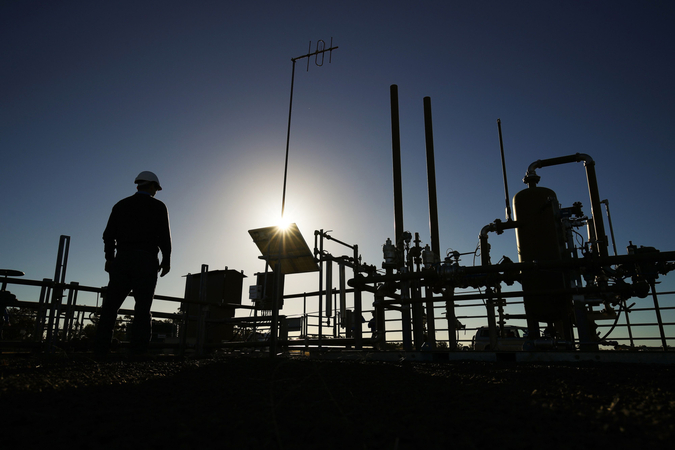 A Santos pilot well operates on a farm property in Narrabri., Australia, on May 25, 2017. MUST CREDIT: Bloomberg photo by Brendon Thorne.

A key battle over the future of fossil fuels and climate change will soon be decided in a sleepy corner of Australia.

After a decade-long struggle pitting a mix of farmers, grandmothers and activists against oil producers and local and federal governments, a panel will decide by early next month whether to greenlight a A$3.6 billion ($2.6 billion) natural gas project.

The resolution will arrive amid growing global opposition to all fossil fuels over their contribution to climate change, and as traditional producers such as BP pivot toward green power. As both a major exporter of energy and a victim of the devastation of a warming planet, Australia's path forward may illustrate how communities weigh the economic benefits of gas against environmental damage.

Santos Ltd. says its Narrabri project, about 500 kilometers (311 miles) northwest of Sydney, is essential for the country to move from coal-fired power toward a cleaner network based on wind and solar. Opponents say the transition should happen without major new gas projects.

"It's wrong to suggest that projects such as Narrabri are some sort of short-term bridge," said Simon Corbell, chief executive officer at renewables-focused consulting firm Energy Estate. "It's not a short-term bridge, it's a long-lived investment that exposes us to significant environment and climate risk."

Narrabri has the potential to supply enough gas to meet half of demand in New South Wales, Australia's most populous state, and will help kickstart the nation's economic recovery from Covid-19, according to Adelaide-based Santos. Gas is the "perfect partner" for renewables, providing the reliability needed to back up the variable nature of solar and wind power, it says.

Santos Chief Executive Officer Kevin Gallagher argued at a community hearing on the project last month that a number of proposed liquefied natural gas import terminals could not compete on price with locally sourced gas. Businesses in New South Wales also pay as much as A$4 per gigajoule ($2.70 per million British thermal unit) more for their gas than counterparts in Queensland due to transportation costs and pipeline tariffs, he said.

Perdaman Group has signed a preliminary agreement to take gas from Narrabri for a proposed ammonium nitrate plant nearby. Santos expects more industrial customers to follow, attracted by the prospect of a new inland rail link to east coast ports and urban centers.

Energy Estate's Corbell said that the history of Australia's gas market demonstrated that low prices could not be guaranteed over the long term. An overbuild of LNG export capacity in Queensland in the past decade is widely blamed for lifting domestic prices, as traditional supply from the Bass Strait fields off the south coast taper off.

"Price volatility will continue at a time when there are more stable clean, zero-emissions alternatives. We need to be focused on those alternatives," Corbell said.

Fuel-intensive industries such as aluminum and chemicals have long complained that high gas prices make them uncompetitive globally. They are broadly supportive of moves to bring on new domestic supply, while a switch to powering their operations solely with renewables is still seen several years away.

Santos has pledged to reserve all the gas from Narrabri for the domestic market. It's also drilling in the highly prospective McArthur Basin in the Northern Territory. McArthur, and the adjacent Beetaloo Basin, could offer a long-term solution to Australia's east coast gas needs, but are equally contentious for their potential environmental and climate impact.

A clean-energy lobby group is promoting an alternative vision, one in which an abundant supply of cheap renewables, backed by technology such as battery storage and pumped hydro, is used to power a renaissance in manufacturing. In a zero-emissions world, Australia's natural advantages in solar and wind mean it would be "the natural low cost place" to manufacture aluminum, according to economist Ross Garnaut.

Santos shares rose 3.8% on Thursday but are down 30% since the start of the year after Covid economic lockdowns led to a rout in oil prices.

At a local level, the debate over Narrabri has focused on the risks to the ecosystem. Santos's environmental impact statement in 2017 received more than 23,000 submissions, a sign of the depth of community feeling about the project.

Farmers worry that drilling through layers of rock and sandstone could compromise the hydrogeological structures that maintain vast aquifers used to supply water for livestock and crop irrigation, leading to water loss or contamination for farms sharing the resource. There are also questions over the disposal of hundreds of thousands of tons of salt the project will produce.

Santos's Gallagher, writing in the Australian Financial Review last month, said extracting gas from coal seams was "a clever, low-impact way of producing clean energy from coal with a very small environmental footprint on the land." His view that the risks are manageable is backed by the New South Wales state government, which recommended in June that the Independent Planning Commission approve the project, a decision that's expected by Sept. 4.

Lined up against Santos is a range of climate activists, including the Knitting Nannas, a group of crusading grannies who express their anti-gas message via needlework. The Lock the Gate Alliance says the project will destroy 1,000 hectares of biodiverse woodland and add as much as 5 million tons a year of carbon dioxide emissions when Australia is already in danger of missing its 2030 Paris Agreement climate target.

Narrabri Shire Council, the local government, is backing Santos, and says the majority of residents are supportive of the development.

"My community is sick of being told how we feel about things and lobby groups trying to stir up trouble," said Mayor Cathy Redding. "The gas project will be a major benefit to our community."