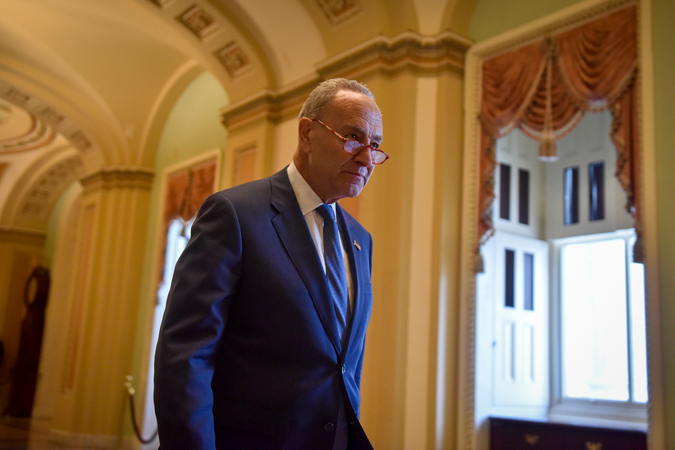 Trump signed four documents on Saturday that he said would provide economic assistance to millions of Americans. But White House officials on Sunday were hard-pressed to describe precisely how the measures would work. One of the measures aims to provide $300 in new unemployment aid, but it's unclear when these benefits might start or if states would be able to implement a new system.

Another measure, which aims to defer payroll taxes from September through December, would require participation from millions of employers, something Democrats said probably wouldn't happen.

Democrats pounced on the confusion and said it showed why the White House should resume negotiations on a broader relief package. Talks had collapsed last week after both sides dug in on what they believed the size of the package should be.

"Unfortunately, the president's executive orders, described in one word, could be paltry, in three words, unworkable, weak, and far too narrow," Senate Minority Leader Charles Schumer, D-N.Y., said on ABC.

The coronavirus pandemic has had a devastating impact on the U.S. economy, leading many businesses to close and lay off workers. Certain sectors, particularly travel, hospitality and retail, have been hit particularly hard. The economy lost more than 20 million jobs in April and has not even regained half of those workers in the three months since.

"There's a lot of hardship out there, a lot of heartbreak out there," White House National Economic Council Director Larry Kudlow said on ABC.

House Democrats in May passed a $3.4 trillion bill that would have continued the $600 payments through January as part of a broader package, but the White House and Senate Republicans sought a smaller, $1 trillion deal. Talks broke down on Friday with both sides alleging the other side was being unreasonable.

House Speaker Nancy Pelosi, D-Calif., on Sunday insisted that over the course of two weeks of lengthy meetings with Treasury Secretary Steven Mnuchin and White House Chief of Staff Mark Meadows, she and Schumer had made significant concessions to get a deal.

"We have to reach an agreement," Pelosi said on "Fox News Sunday. "Children are food-insecure, families are at risk of being evicted, the virus is moving like a freight train."

Pelosi repeated that Democrats had offered to reduce the price tag of their $3.4 trillion bill by $1 trillion, largely by delaying the length of proposed programs.

But Mnuchin said Democrats had refused to come off their $915 billion ask for money for cities and states, a figure he termed "ridiculous." He claimed that apart from that issue and a dispute over the appropriate level of unemployment insurance, all other major matters had been resolved. On Sunday, he called for passing legislation on the 70 to 80 percent of issues where there was agreement, while pursuing the other issues at a later date.

"We don't have to get everything done at once, what we should do is get things done for the American public now, come back for another bill afterwards," Mnuchin said on "Fox News Sunday."

Pelosi spokesman Drew Hammill denied that there had been agreement reached on most major issues as Mnuchin had claimed.

Mnuchin was asked about Trump's plan to defer payroll taxes and ultimately try to cut them altogether if he is elected to a second term. Payroll taxes go to pay for the Social Security and Medicare programs, but Mnuchin denied that cutting them would jeopardize those programs. He contended that the lost revenue would be made up from the general Treasury. That would mean, essentially, the money would be replaced by having the government issue more debt.

"The president in no way wants to harm those trust funds," Mnuchin said.

Major tax and spending changes are typically run through Congress, not changed unilaterally by the White House, which is one reason Trump's new measures led to confusion on Sunday.

Some 30 million unemployed Americans are going without $600 weekly enhanced federal unemployment benefits that were approved by Congress in March, but expired July 31.

One of Trump's new actions would seek to restore $400 a week in jobless benefits by drawing on money in a federal disaster relief fund for $300 a week while asking states to chip in an additional $100. White House officials believe this would provide payments into December, but several budget experts said the money likely would only last five weeks or so. And it's unclear when the payments might begin.

Mnuchin said the money could be paid "immediately," but White House National Economic Council Director Larry Kudlow said on CNN that the payments could take a couple of weeks.

Pelosi said states couldn't afford to participate in this new program because many of them are already extremely cash-strapped, and she said the approach was so complicated it might never work. In a sign of how fluid the programs appeared to be, Mnuchin said states could ask Trump to waive their weekly payment requirement and that the program could be implemented.

Fox News interviewer Chris Wallace pressed Pelosi on her strategy in negotiations, where she held out for many of the Democrats' demands in hopes the administration would agree, but ultimately they walked away instead and the president acted on his own.

"You're known as a master negotiator but didn't you mess this one up?" Wallace asked.

"Well, clearly you don't have an understanding of what is happening here," Pelosi replied, criticizing the "weakness of the president's executive orders, which don't give the money to an enhanced benefit but put a complicated formula there which will take awhile if at all to accomplish to put money in the pockets of the American people."