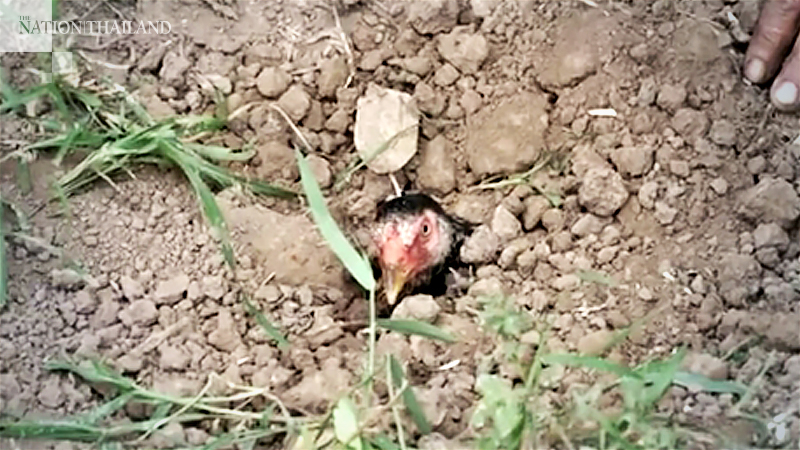 Animal rights group Watchdog Thailand (WDT) warned on Monday it will prosecute anyone caught preparing “kai loom” or chicken in a pit, after the dish went viral online.

The episode shows a chicken buried alive, leaving only its head above ground. The chicken is then fed only coconut milk for two weeks before it is dug out to reveal an animal left featherless by the ordeal. The bird is then killed and grilled for what the show’s presenter says is its delicious featherless, coconut milk-fed flesh.

Netizens responded to the video with disgust, attacking both the channel and the cook in comments below the video and elsewhere on social media. The channel’s owner eventually decided to delete the kai loom clip and offered an apology for introducing his audience to the cruel method of preparation.

However, the WDT said it had already asked Ladprao police station to prosecute those involved in the video.

The watchdog said it had previously brought people to justice in a similar case of animal cruelty involving the dish kai kati (chicken and coconut milk).

WDT said this latest clip post was an obvious case of animal abuse, and torturing animals in this way before eating them was illegal under Department of Livestock Development laws for slaughterhouses.

Under the Cruelty Prevention and Welfare of Animal Act, BE 2557 (2014), torturing animals is punishable by up to two years in prison and/or a Bt40,000 fine.