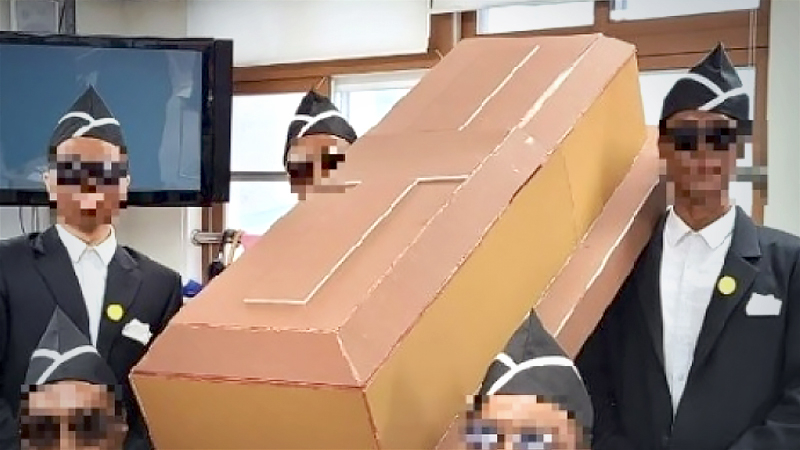 By Lim Jang-won
The Korea Herald/ANN

A few days later, Okyere apologized after people said it was inappropriate to post a photo of the students without permission. They also took exception to his use of the hashtag “#teakpop,” which is typically used in a derogatory way about K-pop.

Many Koreans criticized Okyere online, calling him overly sensitive and inconsiderate. However, Korean songs, dramas and TV programs have also faced allegations of racism this summer.

When K-pop group Mamamoo member Hwasa appeared in an online livestream of a spinoff of MBC’s “I Live Alone” on July 15, some global fans said the clothes the singer wore were racially offensive and that she was making fun of traditional Nigerian clothing.

“We received unfriendly messages concerning Hwasa’s clothes,” posted “I Live Alone” on its YouTube page July 25 after the controversy raged on the internet. “We want to clarify that the clothes, which Hwasa often wears, were inspired by (what is worn in a) Korean sauna.’ We had no intention of comically showing traditional clothing of certain countries.”

Last month, singer Zo Bin of Norazo apologized for his 2011 song “Curry” after K-pop group Seventeen sang the song on V Live on July 13. Seventeen fans, mostly from abroad, criticized the song for its lyrics associating love of curry with yoga, the Taj Mahal and not eating beef. They accused the band of stereotyping Indians and Indian culture.

“I just wanted to sing in a joyful way that curry is tasty in any way to everyone. I did not make the song with the intention to offend someone or diminish the culture and tradition of a country,” said Zo Bin on Instagram. “I apologize to all South Asians and people in India hurt by this.”

Actor Ji Chang-wook of SBS’ “Backstreet Rookie” became mired in controversy when he uploaded a video on social media with another actor, SIC, wearing dreadlocks and performing a comical dance. Some international viewers accused the two actors of appropriating black culture and said their movements were racially offensive.

“Acceptance of multiculturalism and cultural sensitivity levels of many Koreans are very low,” said Yoon In-jin, a sociology professor at Korea University.

“We have lived as monoethnic people and in monoethnic culture for a long time, so we lack in understanding and respecting other cultures,” Yoon said. “We are insensitive as to how our actions can be seen by others. On the other hand, we react angrily if foreigners belittle Korean culture or people.”

In order to prevent racial discrimination controversies, many entertainment agencies educate their artists on racial and gender discrimination, and artists are banned from giving personal opinions on political, social and historical matters.

Some people defended Okyere, saying the criticism against him was two-faced. The hashtag “#I_Stand_with_Sam_Okyere” started trending Friday after Okyere apologized, and many international viewers expressed their disappointment with the attacks against him.

“Hallyu will eventually fall off if Koreans do not educate themselves on other cultures,” said one tweet.

“Through education and trial and error, we need to learn from these controversies and learn to think from the other person’s shoes,” said Yoon.