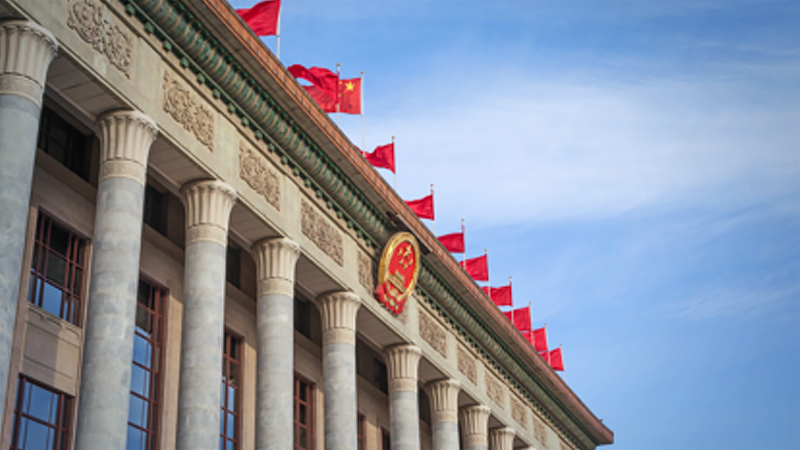 The Great Hall of the People in Beijing. [Photo/VCG]

US officials' attempt to drive a wedge between Party, Chinese people set to fail

Some officials in the United States have been ganging up on the Communist Party of China, but they are turning a blind eye to the fact that the CPC leadership has enabled China to grow into the world's second-largest economy without resorting to warfare, colonialism or slavery.

They also ignore the broad support that the CPC has earned from the Chinese people due to its people-centered governance philosophy, which is in stark contrast with that of political parties of the US putting selfish political gain and capital first, analysts said.

Wu Bo, a researcher of socialism with Chinese characteristics at the Chinese Academy of Social Sciences, said that the CPC considers people's interests all it works for, and the CPC's all-out efforts to protect people's lives and health in fighting COVID-19 have been one of the testimonies of this.

Intensive slandering of the CPC by some US officials is based on an outdated Cold War mentality and deep-seated ideological bias, Wu said, and they have prejudices against the path of socialism with Chinese characteristics and turn a blind eye to the broad support of the Chinese people for the CPC while ignoring their severe problems at home.

Over recent decades, the CPC has led the nation to create economic miracles and long-term social stability. By upholding the vision of a community with a shared future for mankind, it shows it wants to work with the international community, including the US, to build an open, inclusive, clean and beautiful world with lasting peace, universal security and common prosperity.

Raed Fahmi, secretary of the Central Committee of the Iraqi Communist Party, said that the CPC and the Chinese people have every right to be proud of their great achievements in all aspects during the country's development.

"The pillars of China's foreign policy are consistent with the Charter of the United Nations, and provide a sound, solid and stable basis for building a new type of relations between countries that guarantees international peace and security," Fahmi told Xinhua News Agency.

These pillars have been clearly demonstrated "in initiatives and calls for international cooperation and peaceful coexistence between countries with different political, economic and social systems", Fahmi added.

Since May, the US administration has set forth a systematic set of speeches and documents to attack China, specifically aiming at the CPC.

They started with a policy document, "United States' Strategic Approach to the People's Republic of China", released by the White House on May 26. The document is extraordinary as few previous administrations actually put in print similar comprehensive statements of policy that view the CPC as subversive of US values, laws and institutions, as well as the international system.

The document was followed by speeches made by influential US officials, including National Security Adviser Robert O'Brien on June 24, FBI Director Christopher Wray on July 7, Attorney General William Barr on July 16 and Secretary of State Mike Pompeo on July 23.

A number of the officials' accusations have been contradicted, however, by a survey by the Ash Center for Democratic Governance and Innovation of Harvard University's John F. Kennedy School of Government. The center recently said that the Chinese people's overall support for and satisfaction with the central government exceeded 93 percent.

As China deployed effective measures against the coronavirus, public trust in the government rose to 95 percent, with citizens' responses to a survey putting the country at the top of the 11 countries covered. The survey was conducted by US-based Edelman Intelligence in April.

The results moved China up 5 points from Edelman's annual Trust Barometer survey in January, which also ranked the country at the top. The US finished next to last with 48 percent.

China's Foreign Ministry has said that US officials' attempt to drive a wedge between the Chinese people and to create a united front to curb China will not succeed.

State Councilor and Foreign Minister Wang Yi recently told Xinhua that the relationship between the CPC and the Chinese people is as close as between "fish and water "and between "soil and seed".

"Those who attempt to break this strong bond are making themselves enemies of the 1.4 billion Chinese people," he said. "We hope that the US will respect China's social system and the Chinese people's choice and give up its failed interventionism."

China has made it clear that it does not replicate any model from other countries, nor does it export its own to others. It insists that success of its development path is not a blow and a threat to the Western system and path as differences in systems should not lead to a zero-sum game, but should coexist peacefully.

President Xi Jinping, who is also general secretary of the CPC Central Committee, has said on various occasions that the Party's fundamental missions are to seek well-being for the people and realize the great rejuvenation of the Chinese nation.

China unswervingly sticks to the path of peaceful development, Xi said, and it has been and will be a champion of world peace, contributor of global development and supporter of international order.

The CPC has not only sought to serve the Chinese people, but also has made contributions to the development of the world through the Belt and Road Initiative, said Salah Adly, general secretary of the Egyptian Communist Party.

Way out of poverty

Under the leadership of the CPC, China's path of socialism with Chinese characteristics has been the way out of poverty and backwardness for the 1.4 billion Chinese people, and it has enabled the Chinese nation to make important contributions to the progress of mankind.

China is the largest contributor of peacekeepers among the five permanent members of the United Nations Security Council and has been contributing to the peaceful settlement of the Korean Peninsula nuclear issue, the Iranian nuclear issue and other regional and international hot spots, as well as the response to climate change and other global challenges.

In recent years, it has contributed over 30 percent of the world's economic growth, and was an important player in the international response to the financial crisis in Asia and the global financial crisis.

All these facts have been witnessed by the world. Before the 99th anniversary of the founding of the CPC on July 1, more than 100 foreign political parties sent their congratulations to Xi and the CPC Central Committee, lauding its glorious history and China's great achievements.

The European Left party said in its congratulatory message that the CPC has long secured peace and development and upheld people-centered principles.

The Communist Party of France said that China is now, under the leadership of the CPC, striving to achieve high-quality growth, build a moderately prosperous society in all respects and realize the aspiration of the people to live a better life.