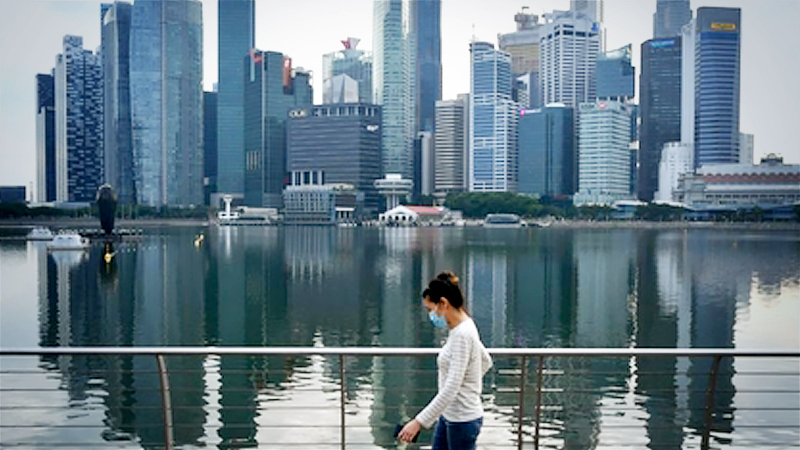 The GDP decline was due to the circuit breaker measures as well as weak external demand amid a global economic downturn caused by the pandemic. PHOTO: ST FILE

By Ovais Subhani
The Straits Times/ANN

SINGAPORE - Singapore suffered a deeper recession in the second quarter than earlier estimated, prompting the Ministry of Trade and Industry (MTI) to trim its growth outlook for the year.

The full-year economic outlook was slightly lowered with MTI now predicting gross domestic product (GDP) will shrink between 5 per cent to 7 per cent in 2020, compared to the previous forecast range of -4 to -7 per cent.

In the second quarter, the economy contracted by 13.2 per cent year-on-year, sharper than the 12.6 per cent plunge earlier estimated and the worst on record, MTI said on Tuesday (Aug 11).

The updated second quarter decline will bring GDP contraction in the first half of 2020 to 6.75 per cent year-on-year, worse than the earlier estimate of a 6.45 per cent drop.

The second-quarter GDP plunge was due to the circuit breaker (CB) measures implemented from April 7 to June 1, 2020 to slow the spread of Covid-19 in Singapore, as well as weak external demand amid a global economic downturn caused by the pandemic, said MTI in a statement.

Quarter-on-quarter and seasonally-adjusted, the economy shrank by 42.9 per cent in April to June, sharper than the 41.2 per cent fall in the first quarter.

"Notwithstanding the narrowing of the forecast range, there continues to be significant uncertainty over how the Covid-19 situation will evolve in the coming quarters, and correspondingly, the trajectory of the economic recovery in both the global and domestic economies," MTI said.

Since the last GDP forecast update in May, Singapore's external demand outlook has weakened slightly, it noted.

Many of Singapore's key final demand markets saw worse than projected economic disruptions in the second quarter, and are also expected to experience a more gradual pace of recovery in the second half of 2020 due to the threat of localised outbreaks and the continued need for restriction measures to contain such outbreaks as they occur, the MTI said.

Throwing light on the expected recovery, the MTI said that the subdued external economic environment will continue to pose a drag on several of Singapore's outward-oriented sectors such as transportation & storage and wholesale trade.

Due to the protracted Covid-19 situation worldwide, the reopening of international borders is expected to take place more gradually than earlier anticipated.

This is likely to weigh on the outlook of sectors that are reliant on tourism - such as accommodation, tour operators and meetings and events (MICE) organisers and air travel.

The downturn in the construction and marine & offshore engineering sectors is projected to be deeper and more protracted than previously anticipated due to the longer time taken to clear foreign workers who reside in dormitories.

However, MTI also highlighted the areas of strength in the Singapore economy including electronics and precision engineering clusters where the stronger-than-expected demand for semiconductors and semiconductor equipment seen in the second quarter is expected to be sustained in the second half of 2020.

The biomedical manufacturing cluster may also continue to grow, aided by the higher output of pharmaceutical and biological products.

Likewise, the finance & insurance and information & communications sectors are projected to expand this year, supported in part by

the strong demand for digital payment processing services, and continued demand for IT and digital solutions.

On the outlook for Singapore’s exports, MTI noted that many of the key final demand markets saw worse-than-projected economic disruptions in the second quarter. Those markets are also expected to experience a more gradual pace of recovery in the second half of 2020 due to the threat of localised outbreaks and the continued need for restriction measures to contain such outbreaks as they occur.

In the US, GDP contracted sharply in the second quarter and the pace of recovery in the second half of 2020 is expected to be slower than previously forecast due to a resurgence of infections in some states that prompted a pause or rollback of reopening plans.

Similarly, domestic demand in the Eurozone will likely remain subdued as elevated uncertainty surrounding the Covid-19 situation and the continued need for safe distancing measures are expected to pose a drag on consumer and business sentiments, and also weigh on the labour market.

In Asia, China’s economy rebounded in the second quarter, following a decline in the first quarter, primarily supported by fixed asset investments. Investment growth is expected to continue to drive China’s economic recovery in the second half of 2020, even though private consumption growth is likely to stay subdued. China’s exports growth is expected to remain sluggish for the rest of the year due to weak global demand.

Growth in the key Asean economies of Malaysia, Thailand and Indonesia in the second half of 2020 is likely to be slower than earlier anticipated, mainly due to the weaker-than-expected recovery of external demand.

In the second quarter, the manufacturing sector shrank by 0.7 per cent year-on-year - a reversal from the 7.9 per cent growth in the previous quarter - weighed down by output drops in the transport engineering, general manufacturing and chemicals clusters.

By contrast, output in the biomedical manufacturing, electronics and precision engineering clusters rose.

The construction sector contracted by 59.3 per cent year on year, deteriorating from the 1.2 per cent contraction in the previous quarter. This was because almost all construction activities stopped during the CB period.

Transportation and storage shrank by 39.2 per cent year-on-year, worse than the 7.7 per cent decline in the previous quarter.

The accommodation and food services sector contracted by 41.4 per cent, sharper than the 23.8 per cent slump in the earlier quarter.

Information & communications posted a mild contraction of 0.5 per cent year on year, a reversal from the 2.6 per cent growth in the first quarter.