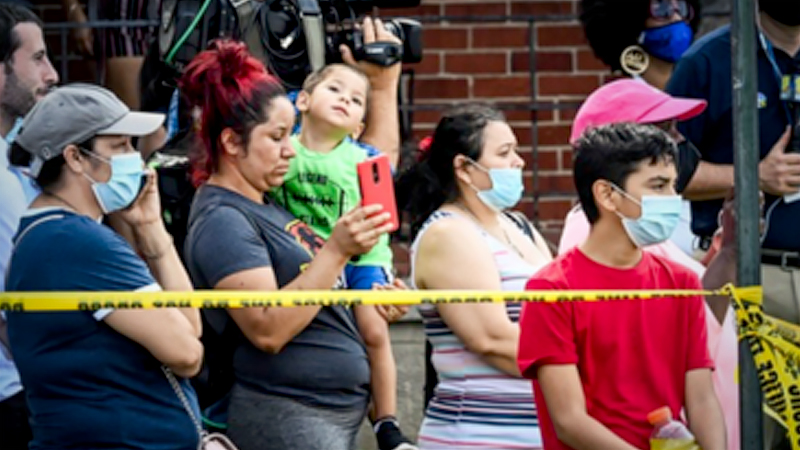 BALTIMORE - A huge explosion rocked a Baltimore neighborhood like an earthquake Monday, killing one person, sending seven others to the hospital and making a rubble pile of three rowhouses, with rescue workers searching the ruins in smothering heat throughout the day for any additional victims.

Authorities said they were investigating whether a natural gas problem led to the disaster.

"I thought we were under attack or in a war," William Ewell, 32, said after the explosion leveled part of his Northwest Baltimore residential block and caused other damage, including shattered windows and bent utility poles, in a radius around the blast site.

Leon Phillips, 64, said he thought he smelled natural gas coming from air vents Monday as he was leaving his home about 6 a.m., headed to work as a delivery driver. His best friend was still asleep in the house.

Several hours later, Phillips said, he started getting calls from neighbors who feared he had been hurt or killed in the blast. "Leon, you better get down here," he recalled one acquaintance telling him. "Your house got blown up."

He said he thinks his friend was hospitalized.

The identity of the dead person, a woman, was not immediately made public. Officials said that seven other people, also unidentified, were hospitalized with serious injuries, and that numerous residents were left homeless in the blast.

Earlier in the morning, the Baltimore City Fire Department said it was searching for at least one person under the sprawling mound of rubble. But later in the afternoon, fire officials did not detail how many others they might be searching for or the ages of those targeted in the "rescue mission."

"We don't know if we have other victims under the rubble at this point," said Fire Commander Roman Clark as the search continued, in temperatures exceeding 90 degrees, with high humidity. "Our fire and rescuers are doing everything by hand."

Crews picked through thickets of splintered wood and piles of jumbled bricks and cinder blocks, with shards of glass and additional hazards all around.

At one location, a dozen firefighters continued to dig through a towering mound of broken bricks and wood. One hung his heavy jacket on the splintered edge of a house and went back to laboring in the heat.

Linda Foy, a spokeswoman for Baltimore Gas and Electric, said the cause of the explosion had not been determined. She said late in the afternoon that workers were shutting down gas service on surrounding streets before they begin trying to determine whether a gas problem caused the explosion.

After hearing from his neighbors, Phillips rushed back to see that his home had been reduced to debris. Standing behind yellow caution tape, cellphone in hand, he was trying to reach his best friend. He said he could not reach his friend or a pregnant woman who lived in the basement with her daughter and a man.

Moments after the explosion, which was reported before 10 a.m., neighbors poured from their homes and climbed the rubble pile, digging frantically for survivors in the wreckage.

Albert Senwah, 21, ran in sweatpants and sandals toward the smell of gas and the sound of people yelling. Stunned by destruction, he started throwing aside chunks of debris, digging toward the sound of a woman's voice. After running home to put on boots, Senwah said, he spent 45 minutes working alongside first responders.

He said the first two people he saw pulled from the rubble were middle-age or older men. One was bleeding from his head, and the other appeared to have severe burns on his body and a broken ankle. Senwah said he also saw rescuers pull out a woman whose clothes were tattered. She was covered in dust and had cuts on her legs.

He said he also heard at least one child crying.

"This definitely won't be forgotten," he said.

Maryland Gov. Larry Hogan, a Republican, said in a tweet that his office is "closely monitoring the situation" after the "horrific explosion."

"We have reached out to offer our full support to the ongoing response and recovery efforts, and are deeply grateful to the first responders on the scene," Hogan said.

"All I want to do is offer my prayers," he said.

As rescue operations stretched into Monday afternoon, neighbors sat in their front yards as people walking past offered to help them board up broken windows. Caution tape was pulled across the entrances to the backyards directly behind the blast site. Pieces of clothing hung from tree limbs, and the smell of natural gas was in the air.

Phillips's grandchildren, who had come to visit him Sunday night, sat on porch steps nearby, frightened and confused.

"Everybody was calling me trying to make sure I'm all right since my kids were there last night," said Auriell McFadden, Phillips's daughter-in-law. She said she thought her father-in-law was dead. "He didn't answer the phone," she said. "He scared me."

"I scared you?" Phillips responded.

His missing housemate was McFadden's uncle. She was desperately trying to find out what happened to him. They later learned that he was in intensive care at a hospital. Meanwhile, Phillips was grappling with what he had lost inside his home: a month's worth of rent money that he had stashed beneath his mattress and, more important, photos of his grandsons.

City Council member Isaac Schleifer was at the scene within moments of the explosion. He ran from his house nearby, where he was eating cereal with his daughters. He arrived to find people covered in blood, with neighbors trying to apply bandages amid the ruin.

"It is a horrific tragedy," Schleifer said. "Horrific."

Schleifer spent hours knocking on doors near the explosion, telling occupants through shattered windows that the city would make sure they had a place to sleep Monday night.

"The pandemic adds another layer of challenges, but we will make sure it happens," he said, adding the city is working with the Red Cross.

The windows blew out of houses as far as two blocks from the blast site. Ambulances and firetrucks jammed the street. Utility workers checked gas lines. Rivulets of water from fire hoses flowed to the gutters, over the cables laid by a dozen new crews.

Up and down Labyrinth, neighbors stood on their porches in the sweltering heat. Others sat on plastic chairs on their lawns.

Michelle Melendez, 28, was asleep after working the night shift when the explosion just behind her house showered her with glass.

She opened her eyes to see the frames of the double window at the foot of her bed had been blown in. One frame was lying precariously atop her air conditioner. Her teal curtains were on the floor. Shards of glass were on her sheets, on her dresser among bottles of perfume and in a laundry basket.

She screamed for her 9-year-old daughter and 6-year-old son, whose rooms were on the other side of the house, away from the blast. Her husband, who had just arrived home, rushed to their rooms to find them shaken but OK.

"I didn't know what to think," she recalled. "I thought it was the end of the world."