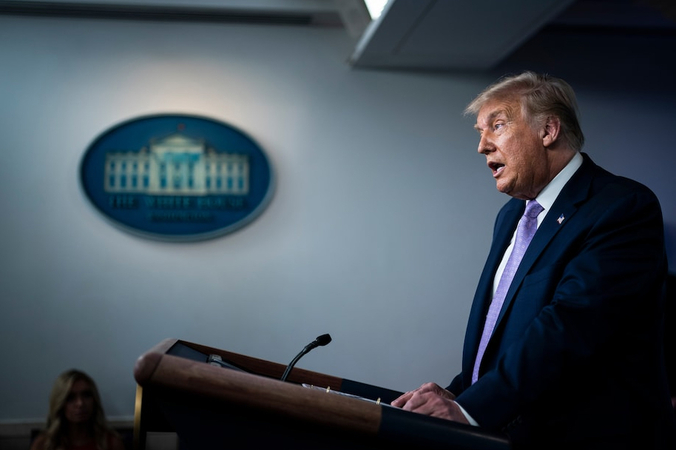 Coronavirus-related deaths in the United States topped 1,000 again Tuesday after a weekend lag, suggesting that the trend of four-digit single-day death tolls will continue for a fourth week.

Tuesday also saw multiple states set new highs for fatalities linked to the virus. Major football conferences canceled their fall seasons. School districts around the country continued to grapple with how - and whether - to allow students back into classrooms.

The day unfolded like so many others in this pandemic summer - with glimpses of a country trying to inch back toward normalcy, alongside reminders of how far that goal remains. Stocks rose, then fell.

As the worldwide total of coronavirus cases surpassed 20 million, the United States remained the epicenter of infections and death.

The global total represented double the infections that had been reported as recently as late June. After the first coronavirus cases surfaced in China in December, it took about six months for the worldwide count to reach 10 million. Another 10 million cases have been detected in the past six weeks alone.

The United States continues to outstrip all other nations with a total count of more than 5 million cases, though infections are climbing in a number of nations that were largely unscathed earlier in the pandemic, including Colombia, Peru, Argentina and South Africa.

The global death toll now stands at more than 732,000 - a number that is almost certainly an undercount - and the head of the World Health Organization said the tally is expected to surpass 750,000 this week.

At least 160,000 Americans have died of covid-19, the disease caused by the virus, a number that continues to grow by the hour.

Of the 1,282 U.S. deaths reported Tuesday, Florida and Georgia recorded their highest single-day death tolls since the start of the pandemic, with 277 and 122, respectively, according to a data analysis by The Washington Post. Tuesday marked the first time Georgia has exceeded 100 deaths in a day and its highest reported seven-day average.

Texas and California also ranked among the deadliest counts with 220 and 109 dead, respectively. Wisconsin surpassed 1,000 coronavirus-related deaths since the state's first reported death in mid-March.

Aside from Georgia exceeding its average death count, Puerto Rico, Tennessee, North Dakota, Montana and West Virginia tied for their highest seven-day death averages, a metric that is considered more accurate than daily figures. The United States' seven-day average for deaths was 1,052.

In 16 states and Puerto Rico, the seven-day death average as of Tuesday rose from the previous week, indicating a growing trend in more than a quarter of the country. Washington and North Dakota tied for the biggest increase in average deaths.

At the same time, the virus continued to upend the rhythms and traditions of daily life throughout the United States.

The Big Ten on Tuesday became the first major college football conference to call off its fall season because of the coronavirus pandemic, and the Pacific-12 followed shortly after. The conferences, whose moves affect all of the fall sports they sponsor, said they would evaluate the possibility of playing in the spring.

President Donald Trump continued to push for college football to go on, saying that canceling the season would be a "tragic mistake."

"Get out there and play football. People want to see it," Trump said at a White House news conference late Tuesday. "These are young, strong people," he added of the players, insisting most would encounter few problems with the virus.

Meanwhile, hundreds of students and dozens of teachers in a recently reopened north Georgia school district have been told to quarantine due to possible exposure to the coronavirus.

In the six days the Cherokee County School District has been in session, administrators have directed at least 826 students and 42 teachers to quarantine, according to an online tally. The district requires face coverings for teachers when social distancing is not possible. It does not mandate masks for students, though they are "encouraged."

"As made clear in our reopening of school plan, we anticipated positive tests among students and staff could occur, which is why we put a system into place to quickly contact trace, mandate quarantines, notify parents and report cases and quarantines to the entire community," Cherokee spokeswoman Barbara Jacoby told the Atlanta Journal-Constitution. "We are not hesitating to quarantine students and staff who have had possible exposure - even if the positive test was prompted by possible exposure rather than symptoms."

The news comes as schools nationwide grapple with how to safely start the school year amid the pandemic. Some have announced in-person classes only to reverse course, while others say their plans remain in flux.

When public schools start back up in Ohio, more than one-third of students will be in classrooms five days a week, Gov. Mike DeWine, a Republican, said as he announced the state's current reopening model during a news conference Tuesday.

DeWine said 325 school districts, or about 38 percent of the state's public school student population, will reopen to full-time, in-person learning. One quarter of the state's public schools will start the year with full-time remote learning, while another quarter will pursue a hybrid approach mixing some days of in-person learning with virtual coursework. A handful of districts are still deciding which approach to take.

"I think our schools are doing a very good job getting ready for in-person or virtual schooling or both," DeWine said. The governor encouraged people to continue wearing masks and being vigilant about health protocols such as social distancing, cautioning that "whatever is going on in their communities will be reflected in the schools."

Although DeWine signaled his confidence in local officials to determine the best school reopening model for their communities, he noted that the percentage of the state's new coronavirus cases from school-age children has grown steadily since the start of the pandemic. Ohioans 19 and younger now account for nearly 13 percent of the state's new cases, compared with less than 2.5 percent in March.

At his news conference Tuesday evening, Trump once again touted his administration's response to the coronavirus pandemic, saying he was confident that cases would decline and that the nation's battered economy would soon come roaring back to life, even as millions of Americans remain unemployed.

Trump also said that "tremendous things are happening on the vaccine front," pledging that "we're going to get it delivered very rapidly."

But it was another country's pursuit of a coronavirus vaccine that generated headlines Tuesday. The Russian government's recent claims of a medical breakthrough with the "Sputnik V" coronavirus vaccine have spurred intrigue around the world - and prompted skepticism from several U.S. health experts.

"I wouldn't take it, certainly not outside a clinical trial right now," former Food and Drug Administration commissioner Scott Gottlieb said Tuesday during an appearance on CNBC's "Squawk Box." Gottlieb noted that the Russian vaccine appears to have "only been tested in several hundred patients at most."

U.S. Health and Human Services Secretary Alex Azar echoed Gottlieb's sentiments and said safety should trump speed when it comes to vaccine development. "The point is not to be first with the vaccine," Azar said on ABC's "Good Morning America." "The point is to have a vaccine that is safe and effective for the American people and the people of the world."

Tuesday also brought reminders that the pandemic and its impacts are far from over, even in places where it has seemed under control.

Auckland will move to impose new restrictions as officials assess the threat, Ardern said, and asked residents to stay home and take precautions. Aucklanders have been asked to wear masks when accessing essential services, while the rest of the country is asked to wear a face covering in places where social distancing is hard to practice.

The first new confirmed case is a person in their 50s who has no history of international travel. All members of the family household were tested, and three more out of six tested positive.

Britain, like the United States, has continued to face crippling joblessness as the pandemic drags on. The employment level has fallen by 730,000 people since the pandemic began, according to data released Tuesday by its Office for National Statistics.

From April to June, employment decreased by 220,000, its steepest drop in over a decade, with younger people and older workers age 65 and above among the hardest hit, along with manual laborers.

The most recent statistics show the total number of employed workers fell by another 114,000 people in July - even though lockdown restrictions are being lifted and the country is attempting to return to normal by reopening shops and restaurants.