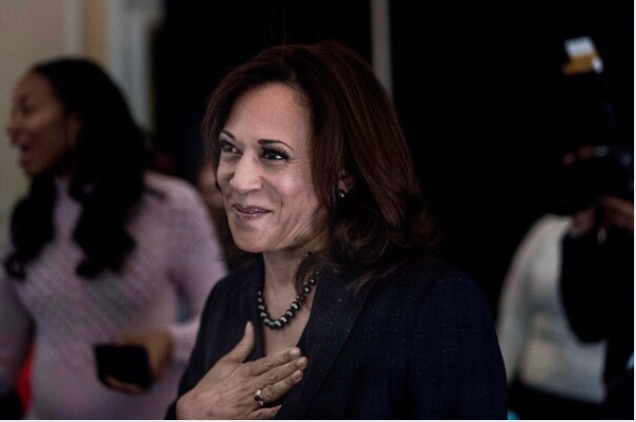 WASHINGTON - Presumptive Democratic presidential nominee Joe Biden on Tuesday picked Sen. Kamala Harris, D-Calif., as his running mate, a historic decision that elevates the first Black woman and first Asian American woman to run for vice president on a major-party ticket at a moment when the country is grappling with its racial past and future.

Biden's announcementt, made in a text and tweet, aligns him with a former presidential rival whose most electric campaign performance came when she criticized his record on school integration during a debate.

The decision is the most consequential of Biden's presidential campaign and has major implications not only for the November election but for the future of the Democratic Party. Biden, 78 years old by Inauguration Day, would be the oldest president ever and has said he considers himself "a transition candidate." The choice places Harris, who was a more vibrant and energetic presence on the campaign trail but was also at times unsteady,at the forefront of the party's future as, potentially, the first woman vice president.

Harris will now become a vessel for Democratic hopes for a diverse party empowered by women, as well as for Republican attempts to funnel a barrage of attacks that have so far been largely unsuccessful when waged against Biden alone.

Harris, 55, is the daughter of Indian and Jamaican immigrants. The first-term senator previously served as San Francisco district attorney and California attorney general. She developed a close friendship with Biden's late son Beau, a relationship that Biden said he reflected upon in making his decision.

The move puts Biden, who served as vice president to the nation's first Black president, in a history-making role in naming Harris as the first woman of color nominated for the position. He also has pledged, if elected, to name a Black woman to the Supreme Court.

While Harris, who dropped out of the Democratic presidential primary in December, was an early front-runner in the vice-presidential sweepstakes, there were still lingering concerns about the sting of the debate moment on her chances - until Tuesday afternoon.

"Joe Biden here. Big news: I've chosen Kamala Harris as my running mate," Biden wrote in an email to supporters. "Together, with you, we're going to beat Trump."

The pick followed a final public push from Black activists, athletes and actors who urged Biden to pick a Black woman - and threatened that his candidacy would be doomed if he didn't.

"My advice was sought," said Rep. James Clyburn, D-S.C., a top Biden ally who had urged him to pick a Black woman and said that Biden called him Tuesday morning to inform him of the decision.

The months-long process before the decision included vetting nearly a dozen women as potential nominees. Biden on Tuesday informed some of the others that they were not chosen.

Former Obama national security adviser Susan Rice, who was among the finalists, quickly put out a statement congratulating Harris.

"Senator Harris is a tenacious and trailblazing leader who will make a great partner on the campaign trail," Rice wrote. "I am confident that Biden-Harris will prove to be a winning ticket."

Rep. Val Demings, D-Fla., who was also under serious consideration, reflected on the historic nature of the pick.

"To see a Black woman nominated for the first time reaffirms my faith that in America, there is a place for every person to succeed no matter who they are or where they come from," she said.

"Joe Biden nailed this decision," Obama said in a statement. "By choosing Senator Kamala Harris as America's next vice president, he's underscored his own judgment and character. Reality shows us that these attributes are not optional in a president."

Harris's prosecutorial record has drawn attacks from party liberals, who have criticized her past stances as too harsh and contend that her record does not meet a moment when police misconduct has rocketed into the national conversation.

But Harris also has built a reputation in Washington as a sharp questioner in Senate hearings, particularly of Trump administration nominees. She has been a forceful advocate for Black families during the novel coronavirus pandemic, and she helped draft a bill ending qualified immunity for police. Some of those who were skeptical of her during her campaign have softened their views of her in recent months.

Harris kicked off her presidential campaign little more than two years after joining the Senate, with an electrifying Oakland, Calif., rally that drew more than 22,000 supporters. But she struggled to define herself to voters, shifting from one message to the next. She failed to take off in the polls and dropped out in early December, citing financial problems.

Harris and Biden have known each other for several years, and as the former vice president noted in his announcement, Harris worked closely with Beau Biden when both served as attorneys general.

That made it all the more shocking to Biden and his team when, at the first Democratic primary debate last year, Harris went after Biden for his nostalgic talk about working with two segregationist senators.

"It was hurtful to hear you talk about the reputations of two United States senators who built their reputations and career on the segregation of race in this country," Harris said during the debate. She also took Biden to task for his opposition to mandatory busing.

On the debate stage, she described a little girl who had benefited from her city's busing program. "And that little girl was me," she said. Within hours, her campaign was selling shirts emblazoned with the words and a childhood picture of Harris.

Biden's wife, Jill, has described that moment as being "like a punch to the gut." But Biden prides himself on not carrying and grudge and since then, the two have publicly made up, with Harris acting as a surrogate for Biden and appearing with him and his wife in campaign events.

In a June appearance on "The Late Show With Stephen Colbert," Harris jokingly defended her performance, saying: "It was a debate! The whole reason - literally, it was a debate. It was called a debate."

"I'd be honored, if asked, and I'm honored to be a part of the conversation," Harris told Colbert about the then-hypothetical vice-presidential nomination. "Honestly, let me just tell you something: I will do everything in my power, wherever I am, to help Joe Biden win."

In late July, Biden was photographed with notes he had written to himself about Harris on his personal stationery. Included were: "talented," "great help to campaign" and "do not hold grudges."

Trump, in the aftermath of Harris's presidential candidacy announcement, was said to be impressed with the size of the crowd she attracted (Trump and his daughter Ivanka also donated a combined $8,000 to Harris's 2014 campaign for attorney general, according to California campaign finance records).

But within 30 minutes of the announcement of her selection Tuesday, the president tweeted a 30-second ad created by his campaign that criticized Harris for some of her more liberal positions, including a willingness to embrace Medicare-for-all. (She later came under pressure from liberal Democrats for adopting a more moderate definition of the health-care plan.)

"Voters rejected Harris. They smartly spotted a phony - but not Joe Biden, he's not that smart," the narrator on the ad says. "Biden calls himself a transition candidate. He is handing over the reins to Kamala while they jointly embrace the radical left. Slow Joe and Phony Kamala."

During a White House briefing, Trump used a word he often does to refer to women with whom he disagrees, saying that Harris was "nasty" during the Supreme Court confirmation hearings for Brett Kavanaugh.

"She was nasty to a level that was just a horrible thing, the way she was," Trump said. "I won't forget that soon."

Biden said July 28 that he would name his running mate by the end of the first week of August, after extending his initial pledge to name the pick around Aug. 1. Aides then said it had slipped further.

He had promised months ago to pick a woman, reflecting the dominance of female voters in the party and his effort to make a historic choice.

The selection process has been a mix of transparency and secrecy. While Biden held his thoughts closely, with many allies saying he had been deliberately vague about his preferences, the parade of prospective candidates played out publicly.

The candidates have appeared at video-recorded events with Biden or his wife and helped host online fundraisers benefiting his campaign. They have been among his highest-profile surrogates in a campaign whose contours have been dramatically reshaped by the coronavirus pandemic.

Several broke with past practice and acknowledged an interest in the job; others, such as Sen. Catherine Cortez Masto, D-Nev., took themselves out of the mix in a similarly public way.

Biden sought the same kind of "simpatico" relationship with his pick that he shared with Obama, in which he served as the last adviser on big administration decisions. He also has put a high premium on loyalty, according to those familiar with the search.

He has spoken openly about his age, saying that it was also important that his pick have the ability to serve as president from "Day 1." That requirement enhanced the desire for candidates who had a deep well of experience and could more easily been seen by voters as president.

But his choice was also affected by events coursing across the nation.

Sen. Amy Klobuchar, D-Minn., once looked like a front-runner, but the killing of George Floyd and other unarmed Black people put a spotlight on her record as a prosecutor, which has drawn criticism from Black activists. Klobuchar eventually removed herself from the running, saying that Biden should pick a woman of color for the ticket.

Biden also faced pressure to delay the pick until closer to the Democratic convention, which begins Monday , to build a sense of momentum for an event that will largely be virtual, lacking the balloon-and-bunting atmosphere of the traditional convention celebrations.

In normal times, the two running mates would barnstorm around the country after the announcement, trying to lift the enthusiasm level of their own partisans and potentially attract new supporters. But Biden has held no large events since March, and has none planned.

Harriswill formally be nominated at the national party convention. She is then scheduled to debate Vice President Pence on Oct. 7 in Utah.

One aim for the Biden campaign has been to unite the various factions of the party, something they hope to do during next week's Democratic convention. On Tuesday, his pick was quickly praised by Sen. Bernie Sanders, I-Vt., who often clashed with Biden and was his last remaining primary rival, although they have worked in lockstep since then.

Rep. Ro Khanna, who co-chaired Sanders's campaign and leads the California delegation to the convention, said in an interview that Harris would win over the Vermont senator's supporters despite her disagreements with him on issues like Medicare-for-all. Having co-sponsored Sanders's legislation in 2017, her eventual alternate plan did not phase out private insurance so quickly.

"She was on Bernie's bill, so I think she's open to it, and we need to continue to build a grass-roots movement on Medicare-for-all," Khanna said. "She's been very progressive on immigration issues. She wants to expand health care. She's a strong voice on labor rights. And she represents a multiracial, multicultural future for the country."