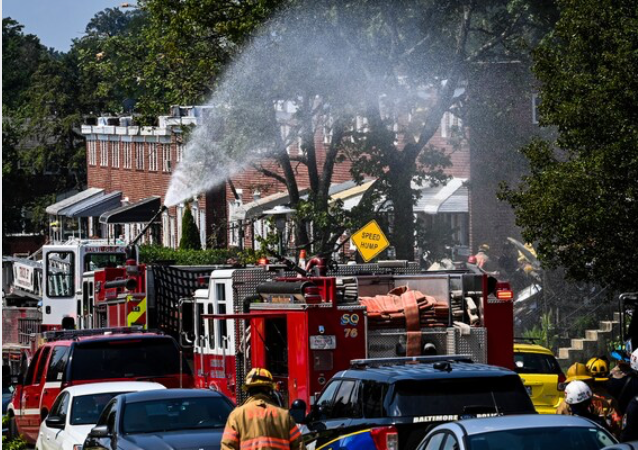 BALTIMORE - A day after an enormous explosion shook Northwest Baltimore, a second person was found dead among remnants of destroyed homes, marking the conclusion of the rescue operation and amplifying pressure on investigators to determine the cause of the disaster.

Baltimore Gas and Electric, the local utility company, indicated that piping inside of one of the three homes leveled may have caused the fatal blast but stressed that the investigation is still underway.

"The data is indicative of some type of issue beyond the BGE meter on customer-owned equipment and is currently being analyzed by investigators," the company said in a statement Tuesday afternoon.

As authorities sifted through caution tape and shattered glass Tuesday, neighborhood residents struggled to face all they had lost: a month's worth of rent stashed in a mattress, pictures of grandchildren, a cane, a safe place to sleep - and for some - family and friends.

The identities of those who died, a woman and a man, had not been made public as of Tuesday evening. Five people remained in the hospital in critical condition, and the status of two other injured victims remains unknown.

Blair Adams, a spokeswoman for the Baltimore City Fire Department, said the second victim, a man, was discovered around 1 a.m. Tuesday. The fire department announced the first fatality Monday. Adams said crews were working to clean up the scene along Labyrinth and Reisterstown roads, but there are no reports of anyone still missing.

For those who survived, their futures remain riddled with uncertainty. Officials have said about 200 families were affected by the explosion and at least 30 families were seeking assistance from the Red Cross and other agencies. No one will be allowed to return to homes in the area except to gather belongings until the buildings are deemed structurally safe and power can be restored, officials said.

"It's like ground zero," said Margaret Glover, 74, staring down her broken street.

Glover had sustained such serious damage to her home that she has been effectively displaced until the active investigation ceases and her house is repaired.

The Red Cross and the city provided hotel rooms for victims on Monday night and was to do so again on Tuesday, according to American Red Cross Regional Disaster Program Officer Paul Carden. But Glover elected to spend Monday night with family over concerns about contracting the coronavirus at her age if she slept in a more public place.

She returned to the edge of her street Tuesday morning, hoping to get inside for the first time since they fled the hazardous scene. Glover wondered if her food had spoiled or whether her blown-out windows had been boarded up.

"This is an experience," Glover said, sitting next to her husband, who had left his cane inside the damaged house. "I think for me, it's worse than covid-19."

With a looming sense that she would be displaced for far longer than she once thought, Glover left the neighborhood to try to come up with a better plan.

The streets surrounding the explosion site were much quieter than the previous day.

Yards where neighbors crowded together anxiously Monday were empty. The windows blown out by the blast had been covered with plywood and tarps. Activity centered around BGE employees dressed in highlighter yellow, who canvassed the area, investigation underway.

In a statement Tuesday, BGE said it had reviewed records and found no leaks reported from the four affected properties, including three that were destroyed and one that was severely damaged, within the past five years. The most recent inspections of gas mains in that area were in June and July 2019, the utility said.

In another statement the same evening, the company said it found no leaks after inspecting the gas main and service pipelines. The company said it will begin restoring service and relighting gas appliances for 34 homes that had service suspended after Monday's explosion.

The company also said the gas infrastructure in the area where the explosion happened was installed in the early 1960s, adding that it had given investigators the gas and utility history for the four homes involved in the blast.

Leon Phillips, 64, said he had smelled natural gas coming from his air vents Monday as he was leaving his home in the 4200 block of Labyrinth Road about 6 a.m., headed to work as a delivery driver.

He returned three hours later to find his house obliterated and his best friend, who had been sleeping down the hall when he left for work, missing. He later learned his friend was at a hospital in intensive care.

On Tuesday, Antoinetta Parrish, 43, sat with Dean Jones, 36, and Neshe Bond, 27, on a porch toward the end of Labyrinth Road. The three did not know each other yesterday morning when, from their separate homes in the neighborhood, they rushed to the scene of the blast and started to dig.

Jones, who first showed up in his socks before running home to retrieve shoes, said he smelled gas and warned the others of the live wires from the downed telephone pole. Parrish, who was doing her taxes when the homes exploded, frantically knocked on neighbors' doors to warn them of danger. Bond, using a cane after a recent car accident, reached the top of a pile of rubble, where she heard a woman yelling, "Help me! I'm here!"

Eventually they pulled enough rocks away to reveal a woman's arm.

"Ma'am, we're coming to get you," Bond remembers saying.

As she looked out across the destroyed homes, she said, she saw another arm shoot up beneath a large section of collapsed roof. She directed the others, including police and eventually firefighters, toward that area.

Monday was a daze, the three said. They spent Tuesday rehashing what they had seen, vowing to share the more disturbing details only with each other.

"It was traumatizing," Bond said. "I'm really surprised as many people survived as they did."