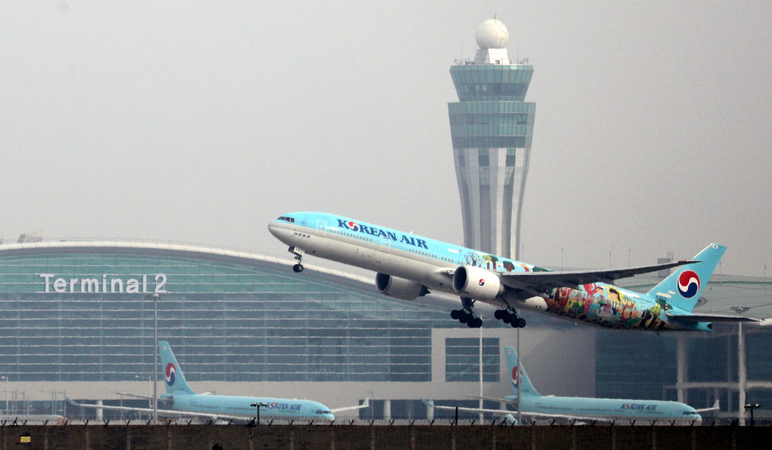 South Korea’s flag carriers Korean Air and Asian Airlines surprised the market last week by posting an operating profit in the second quarter, while major airlines across the world suffered heavy losses due to the pandemic.

In normal times these figures would’ve fallen short of grabbing headlines, but not in a year marred by an ongoing pandemic that has brought the aviation industry to its knees.

“The performance of both airlines is commendable as they responded quickly. I was skeptical when I first heard Korean Air’s decision to deploy passenger jets for their cargo service. It looks like it’s worked while other airlines didn’t consider the option,” said Hurr Hee-young, a professor at Korea Aerospace University.

On top of its existing capacities, Korean Air, with a cargo fleet of 23 aircrafts as of July, has been using overhead bins and installed cargo seat bags on its planes to raise utilization rates, with plans to remove seats from long-haul aircrafts to carry even more cargo later this year.

While demand remained at the pre-pandemic level, supply fell, offering a window of opportunity for the two national carriers that acted quickly, Hurr noted.

“Freight rates are extremely flexible. They change rapidly depending on market demand and supply. Passenger traffic fell rapidly during the COVID-19 crisis while air cargo demand stayed steady, mainly due to medical supplies. The airlines grabbed the opportunity as rates went up by four to five times. It was temporary but a fruitful decision,” he said.

Korean Air has touted its surprise earnings as a result of CEO Cho Won-tae’s idea to pivot to its cargo business and its “One Team” strategy to see through the pandemic.

He came up with the idea to “utilize the cargo compartment of passenger jets and respond to the fluctuating demand” in order to cut down costs and diversify the supply line, according to the airline.

Cargo volume fell during the first half of this year for other airlines, however, including Cathay Pacific, which saw its cargo capacity drop by 24.6 percent though revenue rose by 8.8 percent and Lufthansa whose FTK in the first half of the year fell by 36 percent.

While other flag carriers around the world have announced large-scale job cuts, both Korean Air and Asiana have also managed to avoid it, in part by putting staff on a rotating schedule.

Currently, only 30 percent of some 20,000 Korean Air staff are at work while the rest are on paid leave on a rotating basis. At Asiana, some 4,600 staff including cabin crew have been on paid leave while the rest of its some 10,000 staff rotate on a 15-day basis to squeeze staff spending. Schemes at both airlines are helped by government bailouts worth a total of 3 trillion won which was announced earlier this year.

“With air routes across the world being closed, over half of the staff have been on paid and unpaid leave to help survive the aviation crisis,” a source at a major airline said.

“Since the impact of the pandemic will continue to threaten the industry in the second half of the year, the government should consider providing more support to retain jobs in aviation safe,” the source added.

Such a move, however, has also faced protests. Some of the foreign pilots, for instance, argue they have been subject to discriminatory measures in going on unpaid leaves or having their contracts terminated.

Low-cost carriers are left more vulnerable as they cannot pivot to cargo businesses and have received a drastically smaller amount of government bailouts. Jeju Air, for instance, Korea’s biggest LCC, reported a net loss of 100.6 billion won ($84.4 million) in the April-June period.

Full service carriers are in a better position for now, though challenges remain.

“Korean Air appears to be on course to become the only airline in the world whose debt-equity ratio would drop this year,” the report noted.

“I think the current situation will be temporary as other international airlines see Korean Air and Asiana and try to follow suit,” he said.

Government bailouts are also running dry as many airlines will no longer get help from September. The Labor Ministry is pushing to extend the funds for another 60 days, with the decision set to be announced next week.