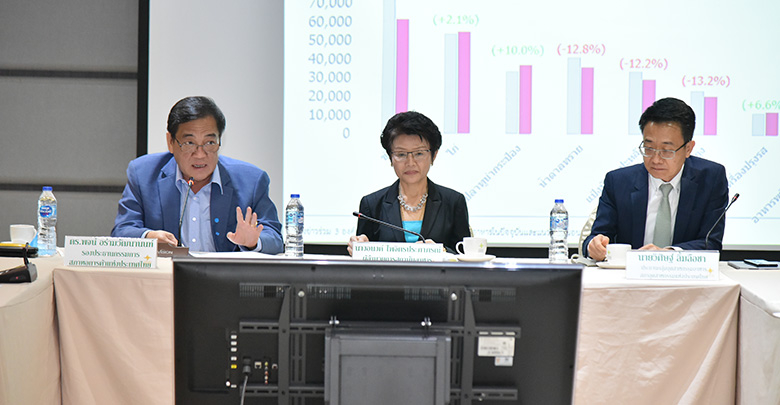 In a joint statement issued on Friday (August 14), the National Food Institute (NFI), the Federation of Thai Industries (FTI) and the Thai Chamber of Commerce (TCC) said that the overall output of the Thai food industry in the first half of this year had shrunk by 8.6 per cent, while total exports were valued at Bt505.58 billion or 2 per cent lower than the same period last year.

“The data from NFI’s Food Intelligence Centre, coupled with input from the FTI and TCC revealed that the 8.6 per cent contraction in food output is a result of the Covid-19 lockdown measures,” said Anong Phaijitpraphaphorn, director of National Food Institute. “Sugar has suffered the biggest impact with 38 per cent contraction, followed by canned pineapple [down 7.9 per cent], tapioca flour [down 4.9 per cent] and frozen shrimp [down 3.9 per cent]. The industries that saw an increase in output include canned tuna [up 18.1 per cent], instant noodle [up 10.7 per cent], seasoning [up 3.9 per cent] and processed chicken [up 3.1 per cent].

“Food export contracted by 2 per cent in the first half of the year especially in terms of coconut [down 15 per cent], rice [down 14.9 per cent], shrimp [down 13.2 per cent], sugar [down 12.8 per cent], and tapioca flour [down 12.2 per cent] due to a drop in demand from hotels, restaurants and catering businesses due to the Covid-19 outbreak,” she added. “Products that saw an increase in exports are ready-to-eat meals [up 15.8 per cent], canned tuna [up 10 per cent] and seasoning [up 6.6 per cent].”

“However, in the second half, we expect food exports to expand by 3.6 per cent year on year to around Bt519.4 billion, as the demand for food will start climbing once economic activities return to normal globally,” Anong added. “Total food export for this year is therefore expected to hit Bt1.025 trillion or 0.8 per cent more compared to last year. This is provided the baht does not get too strong or fluctuate too much beyond the Bt31 to Bt32 against the US dollar.

“We are also positive that food output in the second half of the year will rise as the drought situation has improved thanks to more rainfall across the country,” she added.