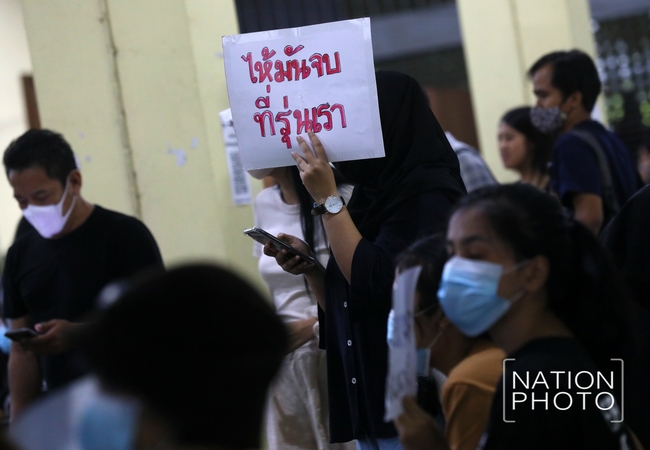 In parallel with a rally at Chulalongkorn University, Ramkhamhaeng University students hold an anti-government protest at their campus today, calling for Constitutional amendments, dissolution of the military-appointed Senate and other changes. (Wanchai Kraisornkhajit #NationPhoto)

Law academics from two Bangkok universities defended students right to protest today, while a prominent opposition politician reacted to the arrest of another student leader by slamming the PM for breaking his promise to listen to young protesters.

Legal scholars at Thammasat University called on the government to stop using the law to deprive students of their basic right to protest peacefully.

The statement was issued today by 23 lecturers amid rising tension between pro-democracy protesters and state authorities that saw police arrest student activist leader Parit Chiwarak. Police also asked the Criminal Court to cancel bail for Arnon Nampa, a lawyer, and Phanuphong Chatnok, leader of Free Youth in the eastern region, who were arrested last week for rally-related activities.

The Thammasat legal scholars called for tolerance and open debate of competing ideas and ideologies, pointing out Thailand was a multipolar political system. They warned that tension between democracy advocates and conservatives was rising fast.

Every party must seek peaceful solutions to the clash of ideas and ensure violence is prevented, the statement said.

In a democratic society, every party has to accept and protect the basic right to gather peacefully, while state authorities must guarantee safety for people to exercise their rights, it added.

The scholars pointed out that there is no ultimate “good” among the different values held by different groups. Therefore those exercising their basic right to free expression must not degrade values held by others, since this risked turning the conflict into violence.

Meanwhile 14 law scholars from Chulalongkorn University issued a statement today supporting the right of students to rally on campus after Chula administrators denied permission for a protest today. Students defied the administrators and went ahead with the rally.

Over the past few days, a large number of academics and civil society groups have spoken up in support of student political activities following fears of a violent backlash from state authorities and government supporters after the students proposed reforming the monarchy – a taboo topic in Thailand. The opposition Pheu Thai Party has assigned one of its MPs to offer assistance and bail to arrested protesters.

In a national televised speech on Thursday, Prayut called for national unity and said the future belonged to the new generation.

“Prayut said he would listen to those who have different opinions from him, but today Penguin [Parit’s nickname] was arrested, which shows that Prayut cannot be trusted,” said Chaturon.