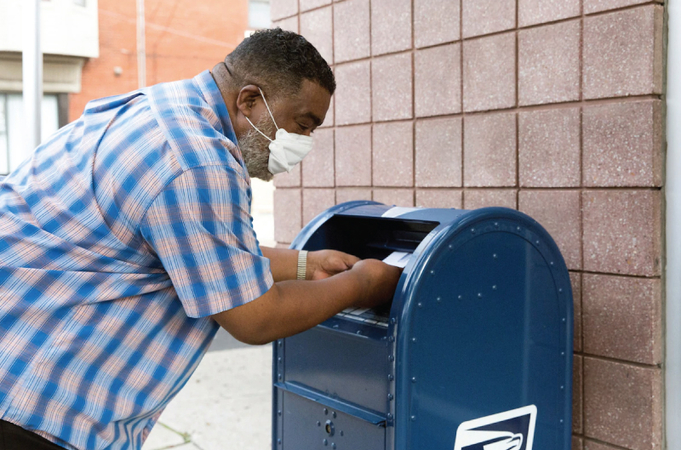 The removal of dozens of mailboxes in a handful of states set off a social media panic and some high-profile attention this week, but the U.S. Postal Service said the iconic blue boxes are just being moved to higher-volume areas.

The reaction underscores the heightened sensitivities around the agency, which has been in President Donald Trump's crosshairs for months. On Thursday, Trump vowed to withhold funding for the agency to restrict Americans' ability to vote by mail during the pandemic. Hours later, photos began circulating online of postal workers in urban areas loading trucks with the public mailboxes.

Presumptive Democratic presidential nominee Joe Biden mentioned the mailbox removals on the campaign trail Friday."I was joking earlier with a couple on the call. I wonder if you're outside trying to hold down your mailboxes. They're going around literally with tractor trailers picking up mailboxes," he said. "You oughta go online and check out what they're doing in Oregon. I mean, it's bizarre!"

He's instituted cost-cutting measures that banned postal workers from making extra trips to ensure online mail delivery and cracked down on overtime that local postmasters often rely on to clear mail backlogs. Postal workers say the new policies have caused days-long delays in localities across the country. The Postal Service also is poised to remove 671 mail-sorting machines, roughly 10 percent of its inventory, in the coming month, another move election advocates say they worry could slow down voters' access to ballots and other important election information.

"Given the other things that are going on, it's okay to ask questions," said David Becker, executive director of the nonprofit, nonpartisan Center for Election Innovation & Research. "The high-speed sorters that are getting deactivated, the loss of overtime, the delays in mail were seeing right now, all of this should cause some concern and warrants questions."

Mailboxes have reportedly been removed in parts of New York, Pennsylvania, Oregon and Montana. Sen. Jon Tester, D-Mont., wrote to DeJoy on Thursday requesting more information about the Postal Service's plans for its mailboxes.

"These actions set my hair on fire and they have real life implications for folks in rural America and their ability to access critical postal services like paying their bills and voting in upcoming elections," Tester said in a Friday statement. "Postmaster General DeJoy must immediately provide Montanans with an explanation for the actions of the USPS, or he can do it under oath before a Senate committee."

Tester staffers first noted the removals when a mailbox outside their office in Bozeman, Mont., had been taken away on Thursday morning, according to the Senator's office. Within hours, Tester received calls from constituents around the state reporting more collection boxes being hauled away.

Tester said in a later statement that the Postal Service had paused mailbox removal in his home state, but said DeJoy "still owes Montanans an answer on why mail collection boxes were removed in the first place," and demanded the postmaster general replace the collection boxes that were already removed.

The Postal Service has close to 142,000 mailboxes across the country, and removes or relocates them on a case-by-case basis, according to agency spokesperson Kimberly Frum.

"Historically, mailboxes have been removed for lack of use and installed in growth areas," she said in an emailed statement. "When a collection box consistently receives very small amounts of mail for months on end, it costs the Postal Service money in fuel and work hours for letter carriers to drive to the mailbox and collect the mail. Removing the box is simply good business sense in that respect. It is important to note that anyone with a residential or business mailbox can use it as a vehicle to send outgoing mail."

The agency has focused in recent years on placing boxes in high-traffic areas such as shopping centers, business parks and outside grocery stores, she said, and removing them from low-traffic areas. When boxes are removed, "advanced notice would be placed on the box to inform customers."

And though voting experts said they were looking into the mailbox removals, Becker said he wasn't tremendously concerned about the affect they could have on mail-in ballots. Voters are required to have a mailing address when they register to vote, and absentee voters can only obtain their ballots through the mail. That means the vast majority of voters already have access to a mailbox, Becker said, and don't need a public mailbox.