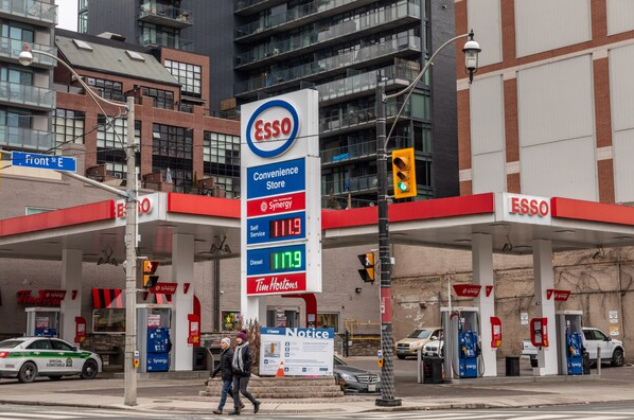 An Esso gas station in Toronto on Feb. 16, 2020. Parkland runs gas stations under the Esso, Pioneer, Chevron and other brands in Canada. CREDIT: Bloomberg photo by Brett Gundlock.

If any business should have had its plans derailed by the pandemic, Parkland Corp., Canada's largest gas station operator, would have been among the top candidates.

Gasoline demand plunged because of lockdowns -- but a curious switch in consumer habits helped blunt the worst of the downturn's damage and kept the company's growth ambitions intact.

Despite a 24% drop in fuel and petroleum product volumes, Parkland's Canada division posted 12.1% growth in same-store sales at its convenience stores last quarter. The gain was driven by an initial jump in sales of tobacco and alcohol that later gave way to increased purchases of household essentials, including groceries and take-home food items.

Chief Executive Officer Bob Espey said the higher demand for groceries and essentials has spilled over into the current quarter. The pandemic may have permanently altered some consumers' shopping habits in favor of smaller locations, he said.

"In our formats, it's easy to access. You can see into the site from the outside and you can see the number of people, and if somebody needs to run in quickly and grab something, they feel much safer doing that than potentially going into a larger-format retail site," Espey said in an interview.

While the company posted a 72% drop in net earnings last quarter, the grocery gain and costs cuts kept Parkland's cash flow robust enough to fund its capital spending, dividend payments and acquisitions. The company ended the quarter with C$1 billion ($756 million) in cash on its balance sheet, up from C$244 million at the end of last year. Parkland also said it will make permanent about C$50 million to C$70 million of the annualized cost cuts it took because of the crisis.

That performance during the worst of the downturn will allow the company to revive growth plans that it had shelved during the early weeks of the pandemic -- including numerous C$1 million to C$5 million projects, such as adding new gas stations or sites for commercial customers, Espey said.

And while the company plans to focus on its strategy of building out its network through a series of smaller acquisitions, it also won't shy away from a bigger deal if an opportunity presents itself, he said.

"We're always open to doing larger transactions," Espey said. "It depends if we can find the right value and the right fit. We've shown that we're a disciplined acquirer, and if we can find good value that's accretive to Parkland, we'll certainly swing at it."

The company also plans to continue working to improve the retail offering at its gas stations, with programs like the Journie Rewards loyalty program, adding quick-serve restaurants to its locations and rolling out private-label brands.

The pandemic also accelerated Parkland's efforts to enhance its digital operation. A partnership with Amazon Web Services allows it to analyze and improve its product mix on an hourly basis, Espey said. That will be key in maintaining the retail momentum Parkland gained in recent months, he said.

"It's difficult to predict where things go, but our hope is that a number of consumers have rediscovered the convenience of our retail segment and will continue to frequent us," Espey said.