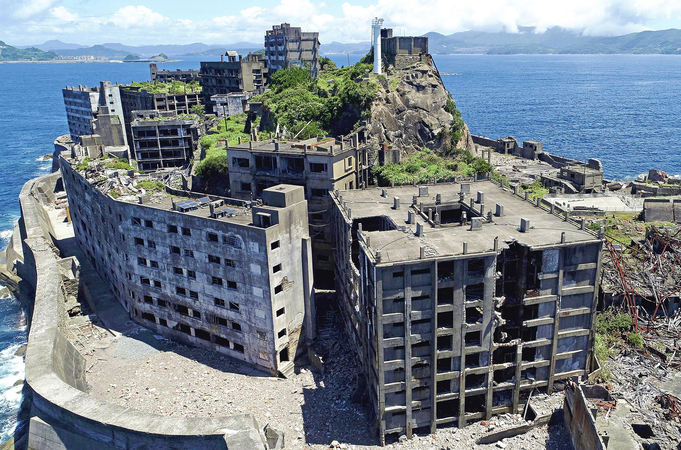 An aerial view taken from a drone shows the partially collapsed Building No. 30, right, on Hashima island, better known as Gunkanjima, in Nagasaki on Thursday. CREDIT: Japan News-Yomiuri photo

NAGASAKI, Japan - One of the buildings on Nagasaki's "Battleship Island," which has been a registered World Heritage Site since 2015, partially collapsed as a result of the heavy rains that have hit the region this year.

The structure on Hashima island known as Building No. 30 is one of the country's earliest reinforced concrete buildings. The buildings give the island a battleship-like appearance, from which the island takes its well-known nickname, Gunkanjima (Battleship island).

The Yomiuri Shimbun took aerial photos of the partially collapsed Building No. 30 on Aug. 13.

Constructed in 1916, the building has historical value as the island's oldest reinforced concrete structure. It is now in danger of completely collapsing.

According to the Nagasaki municipal government, heavy rains caused the collapse on the building's south side on March 27 and its west side on June 11-12. Officials believe that the concrete absorbed water and collapsed under its own weight.

"The building collapsed from the inside, making it impossible to put up scaffolding to make repairs. It's impossible to repair it as it is now," a municipal government official said.

The island was once the base of operations for an undersea coal mine. High-rise buildings made from reinforced concrete were adopted here earlier than any other part of the country. This included apartment buildings used as company housing to cope with an increasing population.

The island itself was closed in 1974 and became uninhabited. Thirty buildings remain to this day, including elementary and junior high schools.

Most of the buildings have long passed their typical lifespan of about 50 to 60 years, and the deterioration of the concrete has become severe.

"The value of the World Heritage site has not been affected because the oldest of the buildings are from the Taisho era (1912-1926)," said an official of the Cabinet Secretariat, which presides over the Sites of Japan's Meiji Industrial Revolution: Iron and Steel, Shipbuilding and Coal Mining, a set of relevant World Heritage sites in Japan, of which the island is a part.

However, modern Japanese history specialist Manabu Arima, the director general of the Fukuoka City Museum, is not so sure.

"The reason why Hashima is introduced as a symbol of [Japan's] industrial revolution era is because of its warship-like appearance," he said.

"Measures to prevent deterioration should be considered and implemented as soon as possible."