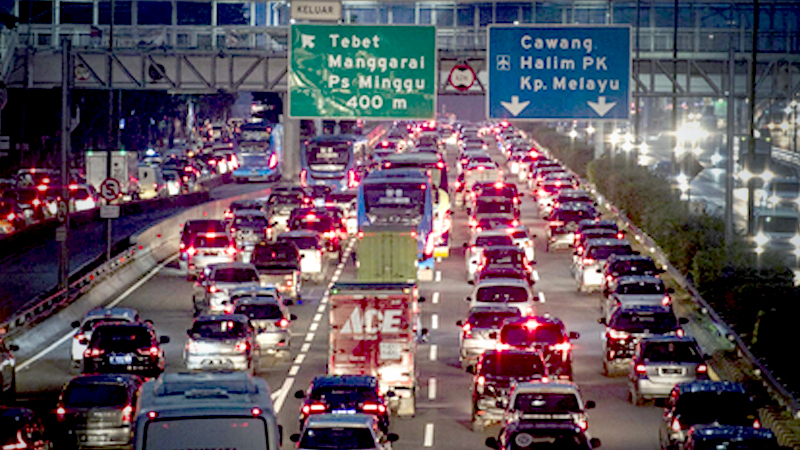 Cars are stuck in a traffic jam on the Cawang-Grogol toll road in Jakarta as the capital sees residents and commuters return to their out-of-house activities during the easing of large-scale social restrictions (PSBB) on June 5, 2020, as the city begins to gradually reopen during the COVID-19 pandemic. (Antara/Sigid Kurniawan)

Jakarta Governor Anies Baswedan has considered pulling the emergency brake to stop the gradual reopening of several essential services sectors as cases of COVID-19 continue to soar in the capital city.

The COVID-19 positivity rate in the city during the past three weeks had reached 8.9 percent, Anies said, above the 5 percent threshold set by the World Health Organization (WHO).

Nevertheless, Anies vowed to closely monitor the positivity rate during the last days of the city's large-scale social restrictions (PSBB) period, which ends on Aug. 27.

“About the emergency brake and so forth, we will monitor [the situation] for a few days ahead,” Anies said on Monday as quoted by tempo.co.

“Since the start of the pandemic, the positivity rate in the country was 13.1 percent with Jakarta reaching 5.9 percent,” he added. “The number would be considered dangerous if it reached 10 percent.”

“I advise all residents to keep wearing a mask anytime, anywhere. If you have any ailments, please report it to us and we will conduct a medical test,” said the governor.

Jakarta reached its critical point as the capital saw rising hospitalization of COVID-19 patients with a 40 to 50 percent occupancy rate in July. Previously, Anies had also hinted at a reinstatement of stricter PSBB after the city recorded the highest number of daily cases.

On Monday, Jakarta recorded 552 new cases of COVID-19, bringing the total number of confirmed cases to 29,952. With the latest number, Jakarta reclaimed the status as the epicenter of virus transmission in the country after passing East Java, which had recorded a total of 28,239 cases as of Monday. (trn)