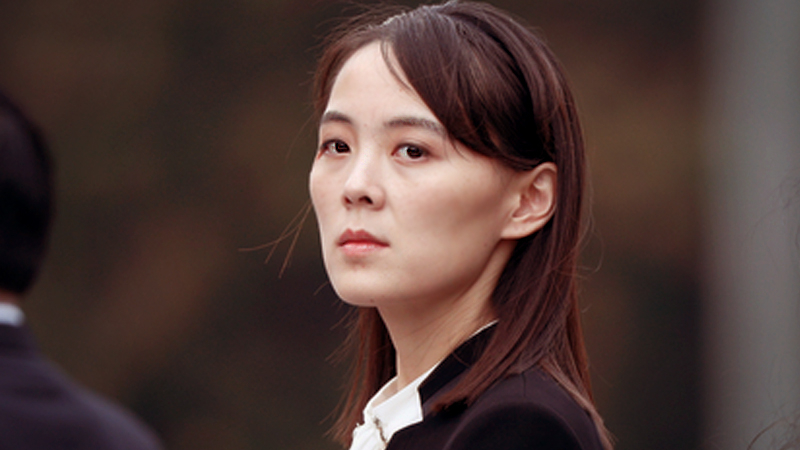 Spy chief says Kim has delegated South Korea, US affairs due to stress.

North Korean leader Kim Jong-un has delegated some of his authority to his younger sister Yo-jong, allowing her to manage South Korean and US affairs, South Korea’s spy agency told lawmakers Thursday.

The move appears to be intended to lighten Kim Jong-un’s burden, the National Intelligence Service said, denying that the leader has any serious health issues.

“In regards to Kim Jong-un’s circumstances, ‘delegation of power’ was mentioned,” Rep. Ha Tae-kyung from the main opposition United Future Party told reporters after a closed-door parliamentary briefing with the NIS.

“Kim Jong-un still exerts absolute power, but in comparison to the past, some of the authority has been transferred little by little,” he said, adding that “high stress levels” stemming from his role in governing the country were one reason behind the power shift. Another reason is so that Kim Jong-un can deny culpability in the event of policy failure, he added.

This, however, does not mean Kim Yo-jong, the first vice director of the Central Committee of the ruling Workers’ Party, has been selected as her brother’s successor, the lawmaker said.

It is not Yo-jong alone who has assumed some of the leader’s powers, the NIS said.

Pak Pong-ju, vice chairman of the State Affairs Commission, and the new premier, Kim Tok-hun, have been delegated the authority to oversee economic policies.

Choe Pu-il, who handles military affairs at the ruling Workers’ Party Central Committee, and Ri Pyong-chol, vice chairman of the Central Military Commission of the Workers’ Party and an official in charge of the North’s missile and nuclear weapons development, have been entrusted with handling military affairs.

During the briefing, the NIS also said the 5-megawatt nuclear reactor at North Korea’s Yongbyon nuclear complex, the communist regime’s main nuclear facility, is not currently in operation.

The reclusive regime has been grappling with severe flood damage and the COVID-19 pandemic amid a failing economy under long-lasting international sanctions.

North Korea’s trade with its main economic partner, China, plummeted 67 percent to $412 million in the first half of 2020 from the previous year because the border was closed to prevent the spread of the novel coronavirus, according to the data compiled by the Korea International Trade Association and released Thursday. Exports plunged 72.3 percent to reach $29 million, while imports dropped 66.5 percent to $383 million in the same period.

On Thursday, Kim Jong-un acknowledged that the North’s economy was failing due to internal and external reasons.

According to the North’s state-run media, Kim said the ruling Workers’ Party will convene a congress next year to unveil a new five-year economic plan, during a plenary meeting of the party’s Central Committee.