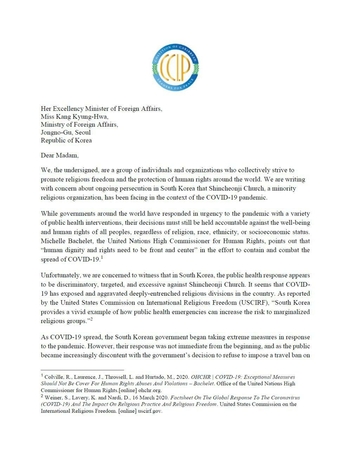 The South Korean church facing a fierce backlash after it was identified as the source of almost two-thirds of the country’s Covid-19 cases is being scapegoated, claim an international group of NGOs and leaders of Caribbean countries.

Shincheonji Church, a Christian denomination, suffered a mass infection at the beginning of this year as thousands of infections erupted among worshippers. Its leader Lee Man-hee was arrested and accused of hiding the outbreak while public clamour grew for the sect to be disbanded. However, an investigation of the church ordered by Seoul’s mayor found Lee had not lied about the outbreak.

On August 17, the Coalition of Caribbean Leaders for Peace (CCLP) consisting of the former and current leaders in the Caribbean including a former president of the United Nations Human Rights Council (UNHRC) sent a joint letter to South Korean Foreign Minister Kang Kyung-wha and the UN High Commissioner for Human Rights Michelle Bachelet. The letter called on governments to protect human rights and expressed concern about “ongoing oppression” against Shincheonji Church.

The letter came after 11 NGOs including the European Coordination of Associations and Individuals for Freedom of Conscience submitted an annual report to the UNHCR titled “Scapegoating Members of Shincheonji for COVID-19 in the Republic of Korea”.

The letter pointed out that Covid-19 was introduced to South Korea from China and was already prevalent in the city of Daegu before the confirmation of the first church case (Patient 31 in Daegu).

It added that the government’s refusal to close the border to China contributed heavily to the outbreak.

Referring to the “Factsheet on the global response to the coronavirus and the impact on religious practice and religious freedom” by the US Commission on International Religious Freedom, the joint letter said South Korea provides a vivid example of how public health emergencies can increase the risk to marginalised religious groups.

It said the South Korean government's silence about the current situation would set a dangerous global precedent for allowing similar persecution, violence and harassment against other religious minorities, and strongly urged the Korean government to “step forward to an end to this discrimination”.

About 28 per cent of South Koreans are Christian.