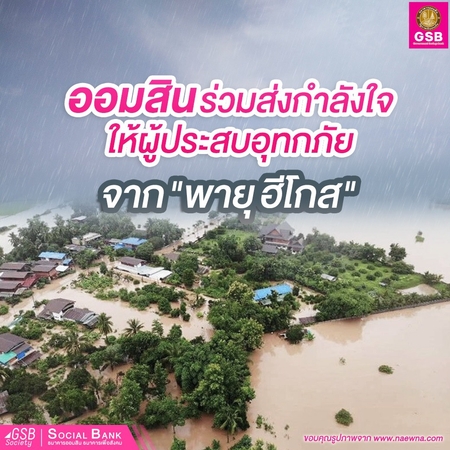 “Two loans are now being granted. One is the ‘Home Repair Loan for Victims of Natural Disaster’. New and existing customers can apply for this loan not exceeding Bt500,000 of estimated damage to their homes under a maximum 40-year repayment plan,” he said. “GSB grants free interest in the first year and a 3 per cent fixed rate until year three. From the fourth year, interest will be at MRR -0.75 [the current MRR is 6.245 per cent],” Withai added.

“The other loan is the ‘Loan for Rehabilitation after Natural Disaster’ at Bt50,000 per person under a 3-5-year repayment plan. This loan offers three-month grace peirod and free interest in the first year, after which the interest will be at a flat rate of 0.85 per cent per month,” he said.

“Applicants for either loan will be exempted from a loan application fee and must present at least one personal guarantor with a monthly salary of Bt9,000 or more,” Withai said.

“Alternately, applicants can use their savings account, GSB lottery or property as collateral, or use the Thai Credit Guarantee Corporation [TCG] as a guarantor if they joined its micro entrepreneur program, in which case GSB will help pay 2 per cent of the guarantor fee to TCG from the second year until the contract ends.”