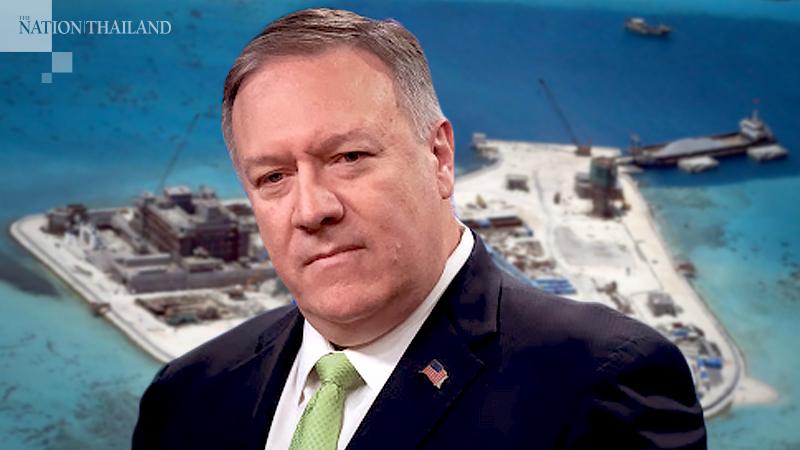 WASHINGTON — The United States on Wednesday announced sanctions and restrictions on two dozen Chinese companies and associated officials for taking part in building artificial islands in disputed waters in the South China Sea.

The 24 state-owned firms include subsidiaries of construction giant China Communications Construction Co., telecommunications firms and a unit of the China Shipbuilding Group.

The US Commerce Department said the companies “enabled China to construct and militarize disputed outposts in the South China Sea.”

“Since 2013, the PRC (People’s Republic of China) has used its state-owned enterprises to dredge and reclaim more than 3,000 acres on disputed features in the South China Sea, destabilizing the region, trampling on the sovereign rights of its neighbors, and causing untold environmental devastation,” Secretary of State Mike Pompeo said in a statement.

The 24 companies were placed on the Commerce Department’s “Entity List” which allows it to block exports of US goods and materials to them.

In addition, Pompeo said individuals associated with the South China Sea operations will be unable to obtain visas to visit the United States.

The names of the individuals were not made available.

Pompeo on Wednesday also blasted HSBC, the Britain-based Hong Kong banking giant, over reports that it had frozen access for executives of Next Media to their personal bank accounts and credit cards as Beijing and Hong Kong security authorities pressure the independent media group.

“Free nations must ensure that corporate interests are not suborned by the CCP (Chinese Communist Party) to aid its political repression,” he said.

The blacklisting of the Chinese companies was the latest step in Washington’s efforts to push back against Beijing over its military buildup in areas of the South China Sea where sovereignty is contested by countries including Vietnam, the Philippines, Malaysia and Taiwan.

Beijing has sought to make its claims to much of the South China Sea a de facto reality by building up small shoals and reefs into military bases with airstrips and port facilities.

In July the United States formally declared Beijing’s pursuit of territory and resources in South China Sea as illegal, explicitly backing the territorial claims of Southeast Asian countries against China’s.

Both the United States and China militaries have stepped up actions in the region, raising tensions between the two sides.

The Chinese have conducted military exercises, while the US navy has undertaken “freedom of navigation operations” to assert its rejection of Chinese sovereignty by sailing through waters around islands that Beijing claims as its own.

On July 13, Pompeo voiced Washington’s increasingly strong challenge to China’s claims, saying “the world will not allow Beijing to treat the South China Sea as its maritime empire.”

On Aug. 6 Chinese Defense Minister Wei Fenghe warned the US to stop making inflammatory statements over the South China Sea and Taiwan and “avoid taking dangerous moves that may escalate the situation.”