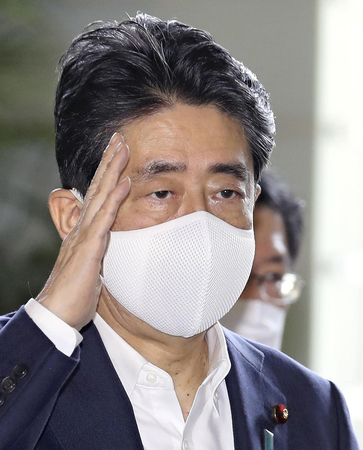 Prime Minister Shinzo Abe announced Friday his intention to step down due to concern over his recurring disease, ulcerative colitis, bringing down the curtain on the nation's longest administration.

"While I go through treatment and my physical condition is not perfect, I can't allow myself to make a wrong political decision and fail to obtain results," Abe said during a press conference Friday. "I have decided that I should not continue in the position of prime minister since I can no longer confidently respond to the public's trust.

"Novel coronavirus infections have been decreasing since July and the countermeasures toward winter have been fixed. I believe now is the only appropriate time to shift to a new administration."

On the selection of his successor, he said, "I leave it up to party executives."

Amid a prolonged fight against the novel coronavirus, Abe decided it would be difficult to lead during this challenging situation while dealing with his own poor health. Abe is Japan's longest-serving prime minister, having held office for about seven years and eight months.

Abe went to Keio University Hospital on Aug. 17 and 24 due to a worsening of his ulcerative colitis condition.

In September 2007, Abe stepped down as prime minister mainly due to the same chronic disease, ending his first administration only about a year after its launch. Since returning to power in December 2012, he had continued stable handling of the government while maintaining his health condition by measures such as staving off symptoms with medicine and undergoing medical checkups twice a year.

However, the coronavirus has been spreading since the beginning of this year. Approval ratings for Abe's Cabinet dropped as the government came under fire for its "slow response" to the pandemic. Under the circumstances, the Abe administration was also forced to give up on Diet passage of a bill to revise the Public Prosecutors Office Law, which would have extended the mandatory retirement age of senior prosecutors, after the move was criticized by the public for "threatening the prosecution's political neutrality."

The nation's economy, which had been brisk, rapidly worsened with the gross domestic product shrinking by 27.8% in the April-June quarter on an annualized basis. The Abe administration was also forced to halt its diplomatic efforts, which previously helped boost its approval rating, amid the pandemic.

As Abe's term as the LDP president was set to expire in September next year, moves to find his successor had accelerated and his dominant clout rapidly declined.

According to a source close to the prime minister, Abe was under strain from the situation in which he received criticism for his every action and ran out of options. From January to June, he was at work constantly and gave up his annual summer practice of taking a rest at his vacation house.

In mid-August, members of the government and ruling parties began expressing concerns over Abe's health one after another, with some saying he did not look well while others pointed out he was walking slowly. Deputy Prime Minister Taro Aso, who also serves as finance minister and is close to Abe, had urged him to take rest when visiting him at his residence on Aug. 15.

Meanwhile, the LDP will start work to select Abe's successor following his resignation announcement. If an LDP president steps down from the post before the expiration of a term, a successor as party leader will be usually chosen at a joint plenary meeting of party members of both Diet houses. The schedule to select Abe's successor is likely to be affected by whether voting by LDP members, in which each LDP prefectural chapter is represented by three party members, will be held.

When Abe resigned as prime minister of his first administration in September 2007, a joint plenary meeting was held 11 days after he announced the resignation due to a need to pick his successor swiftly as a Diet session was underway. At that time, LDP members representing prefectural chapters did not vote across the board, with the vote held in only 35 of Japan's 47 prefectures.